2019 is the 10th anniversary of Minecraft, one of the biggest games in the world. As part of its ongoing celebration, publisher Microsoft revealed today that lifetime sales of Minecraft have surpassed 176 million copies across consoles, PC, and mobile. It also said that developer Mojang is working on a new game in the beloved franchise. No, it’s not Minecraft 2. But it has the potential to be bigger than that.

Minecraft Earth is a free-to-play augmented reality game for iOS and Android that transports the familiar block-building gameplay into the real world. You’ll gather resources, fight against mobs (Minecraft’s deadly monsters), and interact with other people’s creations. Mojang will launch a closed beta this summer, and you can sign up for it here.

If the worldwide success of Niantic’s Pokémon Go is anything to go by, Minecraft Earth should have no trouble finding a dedicated audience — just think of the millions of children who grew up with the original game. Minecraft is also known for having absurdly creative players who build the most intricate sculptures, and giving them the tools to put their creations into AR is an exciting prospect.

It’ll be a busy summer for Mojang. In addition to running the Minecraft Earth beta, the developer will be preparing to host its annual Minecon livestream (which use to be a physical conference) on September 28.

That’s usually the time where Mojang reveals big new updates about Minecraft, and assuming Minecraft Earth isn’t out yet, perhaps we’ll hear more about the new mobile game as well. 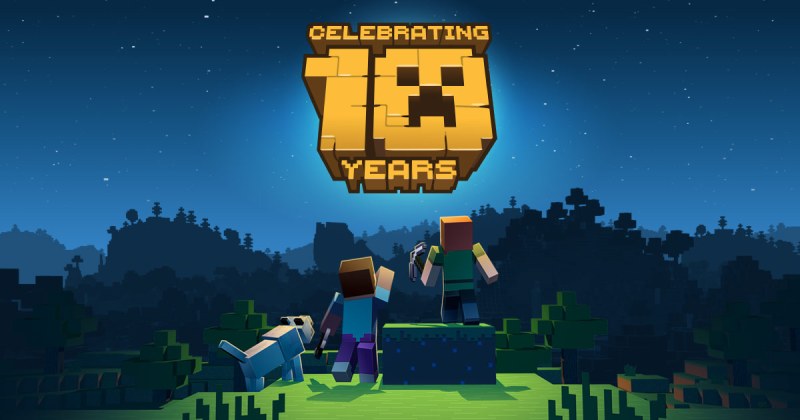 Above: Hard to believe that the game came out in 2009.

A strong but complicated legacy

Before Fortnite took the crown, Minecraft was gaming’s biggest pop culture phenomenon, leading to the creation of spinoffs, a boatload of toys, and other miscellaneous merchandise. More than 91 million people still play the game every month. A lot of streaming and YouTube personalities built their careers off creating videos that chronicle their Minecraft adventures.

The game’s ubiquity is one big reason for its success. While Minecraft originally launched on PC, it’s now available on practically every modern platform, including virtual reality headsets like Oculus Rift and Samsung Gear VR. The Minecraft Marketplace, where players can sell their fancy builds, also provides fresh content on a consistent basis.

Most of this expansion came after Microsoft bought the game and Mojang from original creator Markus “Notch” Persson for $2.5 billion in 2014. As GamesBeat PC Gaming editor Jeff Grubb wrote in March, the reclusive developer has turned into a “bizarre internet creep” who regularly espouses conspiracy theories on social media.

But with the recent removal of Notch’s name from Minecraft’s splash screen (he’s still in the credits), Microsoft has been slowly trying to distance itself away from him. And that’s for the best, especially as the company prepares to launch another potentially lucrative version of the game.