It’s not quite Minecraft, but the Lego-like block world of Roblox is doing just fine at its tenth anniversary. The San Mateo, Calif.-based company has more than 30 million monthly active users for its sandbox video game that lets users create their own spaces and games.

Roblox is near 900,000 concurrent users at its peak, and users have put more than 300 million hours into it. The top game creators on the platform are now making more than $50,000 a month in revenue, and Roblox now runs across phones, tablets, PCs, VR, and Xbox. I talked with Dave Baszucki, CEO and cofounder of Roblox, in an interview. Baszucki believes the social interaction is what keeps players engaged in the universe, as well as the mini games within the free-to-play game world that fans can create themselves.

We talked about the future of the platform and what Baszucki expects in 2017, including how Roblox is embracing virtual reality. Here’s an edited transcript of our conversation. 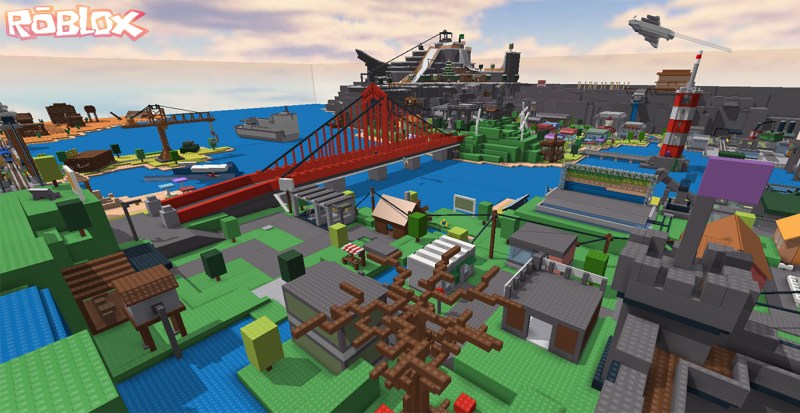 Above: One of the original creations in Roblox.

GamesBeat: How are things?

Dave Baszucki: Things are going well. We’re growing very rapidly, faster than ever, across all platforms, Android and all. We’re very happy about that.

Baszucki: We believe we’re starting to see a network effect. Retention is getting higher as more people come to play with their friends and have a better chance of finding their friends. The bigger the network, the higher the retention. We’ve also done a lot of work this year increasing the percentage of apps you can play with friends, the ease of finding friends. We just introduced version one of integrated Roblox chat across phones and tablets and PCs. It’s the combination of network effects and a lot of good growth-oriented functionality.

GamesBeat: How would you lay down the context for the appeal of Roblox, especially with other big things out there in the world like Lego or Minecraft?

Baszucki: One of the cool appeals of Roblox is the idea that it’s a place you can go with your friends to potentially do things together. Imagine you’re experiencing things together, whether it’s playing or creating or storytelling or learning. The more players get into these virtual environments, the more they become social environments. Some of our most popular experiences aren’t competitive. They allow kids to pretend they’re at a fashion show together, or they’re birds flying around collecting insects. We focus on human co-experience, allowing friends to come together and do things together in virtual environments.

GamesBeat: How many years is it now since you guys got started?

Baszucki: We just celebrated our 10-year anniversary. We passed 30 million monthly active players. We’re very close to 900,000 concurrent players at peak. We’re well over 300 million hours of user engagement. We’ve been growing consistently at over 50 percent year-on-year. If you look at Google Trends or our App Store rating, our MAU growth is over three times each year.

GamesBeat: Does that coincide with more things that help you out on a social level, like streaming and other social media?

Baszucki: It does. We always think the product will lead. You have to have a visionary product that allows people on all these devices to experience and socialize together. But around January of this year, we saw the YouTube community pick up and amplify that. I haven’t seen the latest, but I know we’re one of the top eight games or platforms streamed on YouTube now. Someone’s quoted as saying we have more than 200 million YouTube views every month, and that number is growing. We’ve seen a big uptick from some top YouTube video bloggers. 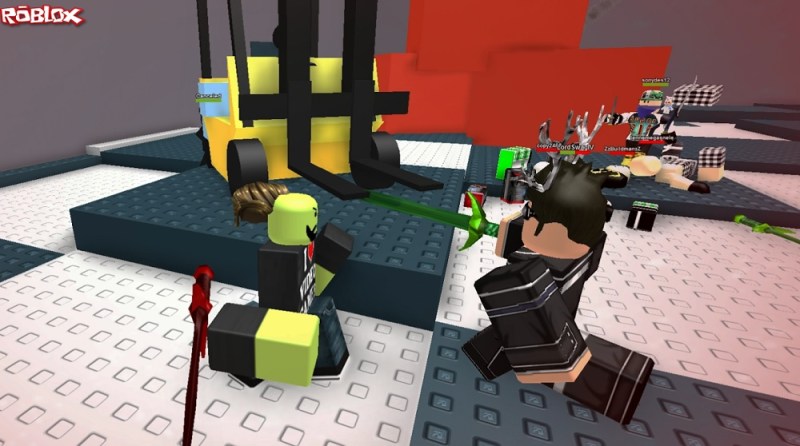 Above: The Sword Fighting Tournament game.

GamesBeat: What about the parallel path of content creation?

Baszucki: Content creators keep getting better. Top creators are now pulling down $50,000 a month in revenue. They’re starting to make games that work across phones, tablets, PCs, VR, and Xbox. We continue to be number one or number two in the Xbox ecosystem for games. That’s done very well. Even recently in South Korea, Roblox on Android phones was I think the number 17 downloaded app in the game category.

GamesBeat: What’s some of the future that you can predict in this space?

Baszucki: Our indicators and our vision tell us that social co-experience — allowing people to do all kinds of things together, including competition but also working in virtual restaurants or surviving virtual disasters or all the other fun things you can do on Roblox — is a superset. It’s bigger than gaming. Our road map is about making Roblox more social, more immersive, and supporting our developers with better tools to make quality experiences for people to socialize in.

GamesBeat: How do you avoid getting caught up in chasing things like Minecraft or Lego?

Baszucki: We’re not really chasing anyone. Minecraft and Lego each have their unique categories. They focus on unique things. We have a unique vision of our own. It’s focused on user-generated content and human co-experience, making that run in the cloud across all devices, and trusting in the power of our community to create interesting content and monetize that content.

Even, in a meta way, they’re creating experiences that are creative in themselves. A lot of the experiences on Roblox are places where you can build an amusement park with your friends that persists in the cloud, or build a lumber mill, or design clothing and compete in a fashion show. It’s all about using our crowd of developers to create experiences and letting people play in them.

GamesBeat: How do you look at the VR market right now? Nobody’s going absolutely bananas about the numbers in VR yet.

Baszucki: VR is ultimately the most immersive social experience. When you play Roblox in VR, you feel like you’re there with your friends. In the context of VR, we think that just with what we’re doing on other platforms, social is ultimately bigger. It’s a superset of gaming. Social will be powered in VR by user-generated content, just as on other platforms.

I feel like, on a high level, we’re somewhere between the Newton and the iPhone for VR. There’s an inflection point, as there was with smartphones, when the iPhone got everything right and you started to see things accelerate. We’re still in the middle of that process. We have 20 to 30 more years of hardware improvement that will make the VR headsets of today look like the old compact portables, those 40-pound things we used to lug on airplanes. Over time we’ll migrate to lighter weight goggles, lighter weight glasses, and eventually embeddable eye implants. Somewhere along the way it’ll click in like the iPhone did and it’ll be enough to accelerate to not just 50 million headsets, but a billion headsets.

The market’s waiting for a solution to vestibular confusion. Until we get that solution, we’ll see experiences that get more adapted around inner ear sensitivity and do what’s necessary, whether it’s teleporting or staying in your seat. We’ll work around it. Just as in gaming, in VR there will be caution around going all the way to photorealism. The uncanny valley can be even more poignant in VR, because it’s so immersive. In the short term people will use caution in trying to cross that.

I’m bullish on face, arm, and hand tracking, feeding that in. That’s one of the cool things that VR can do. My guess, though, is that over the next four or five years, we’re still in the sub-100 million headset zone. We’re not getting into smartphone volume in the next four or five years. But we’ll see well over a million Roblox players on VR within those constraints.

To cap it off, through this period, as the market figures out where and when VR will meet the inflection point, it’s critical for vendors — especially like us, making a social platform — to be in the game with cross-device social play. You need to have people on phones and consoles socializing with people in VR. People in VR can’t just be all by themselves as the quality of the hardware ramps up. Most people will be on other devices wanting to socialize. That’s a huge part of our strategy, experiences where people can play across all devices.

Above: Roblox gets bigger and better looking every year.

GamesBeat: The Second Life people decided to break with the older platform and create a new one for VR. Are you thinking about what to do in that area? 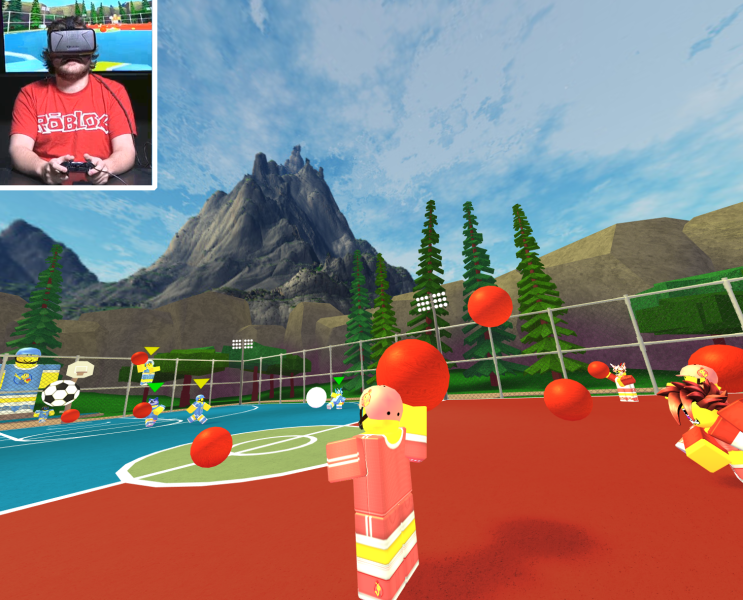 Above: Roblox wants to reach players on every platform, and VR is no different.

GamesBeat: For 2017, what can you foreshadow as far as what you’re doing for your users?

Baszucki: I can foreshadow a very elegant solution to cross-device and cross-language creation, where developers can create one 3D experience that works all the way from phone to VR, and also works across all languages. You’ll see increasing quality and performance from all of our apps, especially in integrating more social functionality around finding and playing with friends, moving seamlessly in and out of 3D environments.

You’ll see a focus on the quality of our developer tools and developer support. Their games and experiences will increase in quality. Hopefully we’ll migrate our top developers to making much more than $50,000 a month. We have a lot of good things going.