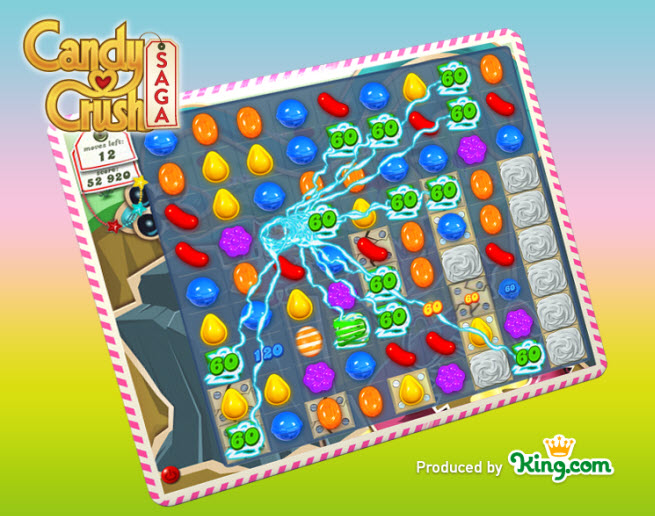 London-based King.com is launching Candy Crush Saga on Facebook today as part of its bid to capitalize on the shift in audience tastes toward increasingly casual games. Since debuting its first social network title last fall, King.com has become the fourth-largest publisher on Facebook.

In the past, players have been in love with Zynga’s simulation games such as FarmVille and CityVille. While those appeal to casual audiences, they often consume an increasingly large amount of time as players create their dream farms or cities. King.com, on the other hand, has launched six Saga titles that are appealing because they can be played in a minute or two. The trend is so strong that now King.com’s Facebook users are playing 2.5 billion matches a month. A year ago, that was just 300 million on King.com’s web site.

Candy Crush Saga is a candy-themed match-three switcher game like PopCap’s Bejeweled, where you line up three corresponding colored jewels within a larger patchwork puzzle. One of King.com’s most popular to date, it has 65 levels and provides several modes for players to test their skills against time, limited moves, collecting objects, and removing jellies. Your goal is to help Mr. Toffee and his daughter Tiffi to travel the world, meet fun characters, and get around “blockers.”

Candy Crush Saga competes with Berlin-based rival Wooga’s top game, Diamond Dash. King.com has 36.7 million monthly active users on Facebook, making it the fourth-largest on the social networking site. But in daily active users, King.com has just edged out Electronic Arts with 9.44 million compared to EA’s 9.40 million. That makes King.com the third-largest developer on Facebook in this measure. That is a big change from a year ago, when King.com wasn’t even on Facebook.

Both King.com and Wooga are out to prove that Zynga does not in fact own the entire market on Facebook and that the market is a lot more competitive than others would have you believe. They are both jumping on the casual trend. Back in January 2010, there were no casual titles where play time was focused on a minute or so on Facebook’s top ten list. In January 2011, there was one title. And in January 2012, there were five titles, said Alex Dale, chief marketing officer at King.com, in an interview with GamesBeat.

Founded in 2003, King.com has had big advantages because it has had long experience running its own casual games website. Only recently has it adapted its strategy to cross over to Facebook. It started last September with the launch of Bubble Witch Saga, King.com’s most popular casual title. Now, King.com has a total of eight games on Facebook, and each one is generating more usage through strong cross-promotion, Dale said.

Compared to Wooga, King.com’s business model is a lot different. At its main website, King.com has tournament games where players put some real money down to enter. Its games monetize through both competition fees and advertising whereas Wooga’s title monetize mainly through virtual goods sales, said Dale. But King.com also monetizes through virtual goods sales, so it has more ways to make money.

“Our engagement numbers are high in both the U.S. and Europe,” Dale said. “We’re very bullish on Facebook.”

Riccardo Zacconi, chief executive of King.com, said in an interview with GamesBeat earlier this year that the company’s rollout on Facebook has been slow and deliberate. Now. Zacconi is rolling out more and more of King.com’s 150 titles, and in the past nine months, King.com has doubled its workforce to more than 200 people. It is hiring more than 100 people this year and will likely expand to mobile as well. It has already expanded to Google+.

“We had a disadvantage at the beginning because we had to figure out Facebook,” Zacconi said. “But now we understand it, and we can bring our assets from 150 games in eight languages to bear.”

Zacconi will speak at our upcoming GamesBeat 2012 conference in a case study on the crossover strategy of moving from the web to Facebook.