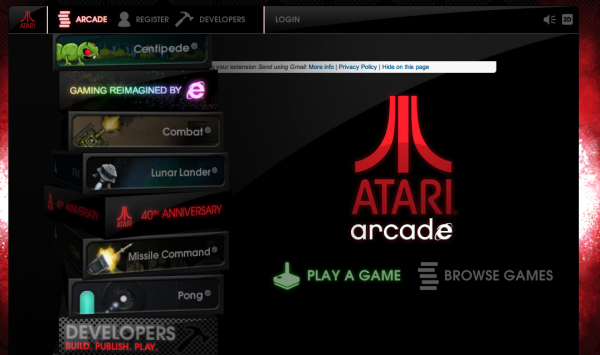 This morning, Atari announced that for the 40th anniversary of the game company it would release eight classic titles, completely remade to support touch controls, for browsers.

Microsoft provided Internet Explorer 10 and Windows 8 as the framework and helped build the games from scratch specifically for HTML5 (the new lingua franca of the web) and for touch controls. That is to say, the eight Atari games now available through the Atari Arcade for anyone in the world to play are fully compatible with tablets and multitouch gestures. But you’ll have to wait until Windows 8 (Oct. 26) and IE 10 are released before you can play them as they are intended.

The innovation is in the HTML5 programming, according to Microsoft General Manager of Internet Explorer Ryan Gavin. He walked me through the eight games, which includes the following:

Each title, built from the ground up and with enhanced controls to support both a keyboard and/or mouse as well as multitouch, are best suited for IE 10, the upcoming browser shipping with Windows 8. The reasoning is simple: Only IE 10 supports multitouch gestures in the browser. It’s safe to say that competing browsers like Google’s Chrome, Mozilla’s Firefox, and perhaps even Apple’s Safari will quickly follow suit with multitouch on the same level, but the interesting thing is that these games work on any browser right now. At least, any browser that supports HTML5.

I got to play the games on a Windows 8 development tablet, and the touch controls are surprisingly good. So much so that the entire experience feels like a native application more than a browser game. According to Gavin, while some of the games cache and don’t require a persistent Internet connection, others do, and those are more reliant on network stability. You can play Pong once it finishes loading and it feels like a native app no matter how good your internet is. Lunar Lander, however, updates frequently and with weaker connections can stutter. In my playtest it did, but was still fully playable. Later on, I tested all of the games on Google Chrome on a MacBook Air over Verizon LTE, and they worked flawlessly. In the video on the right, you can see some gameplay on a tablet.

The updates to the titles, and to HTML5 and IE 10, are pretty ambitious. Multiplayer games can be created on the fly between browsers only through Web Sockets, which connects two or more browsers for direct communication over the internet. This means games like Pong will work online between two players with nothing more than your browser, though only IE 10 supports the function currently. The relative smoothness and ease-of-use of Atari Arcade, on both IE 10 and even Safari for iOS, works really well. Chrome on Android 4.0, however, does not; at least not yet.

Atari has also built the games to recognize the hardware of the device — be it a laptop, tablet, or smartphone — and determine how much of the game can be compiled on the computer instead of through the server’s hosting the game. These games, and future apps running the same way, will automatically adjust their appearance, features, and speed based on the type of hardware users log in from. This essentially means that eventually it won’t matter what sort of computer you log in from, so long as it isn’t too old the software will adapt to you, not the other way around.

I’ve tested Atari Arcade on iOS, Android, and on a handful of desktop browsers, with mixed results. IE 10 is the only one that works perfectly (no surprise there) and is also the only browser that plays the games ad-free. Chrome can run all of the games without a problem on desktops, but not on Android. Android can’t get through the ads, which are ironically Flash-based. Chrome and Safari both work with the Atari Arcade on iOS, though the iPhone’s display is too small to show a full game. As of this writing, I don’t have an iPad to test with.

Atari has also helped build a developer SDK for anyone to make their own “old school” games in the same fashion as the currently available eight titles. The SDK will allow developers to both create their own browser games that support multitouch gestures as well as upload them to Atari to join the list of available titles. Atari and Microsoft have put out a short video discussing all of the work they’ve done, and the history behind it, which you can watch here.

On the back-end, Grant Skinner, of gskinner.com, has also built several developer tools such as Zoe, which convert Flash games to HTML5; reducing the file sizes dramatically for improved network performance (as much as 5X, according to Microsoft), and several Javascript enhancements for templates and effects.

Atari Arcade is available now, so go try it out for yourself and let us know how it works for you, especially on tablets and smartphones. You can read more about how Atari and Microsoft worked on it at the Microsoft Blog.