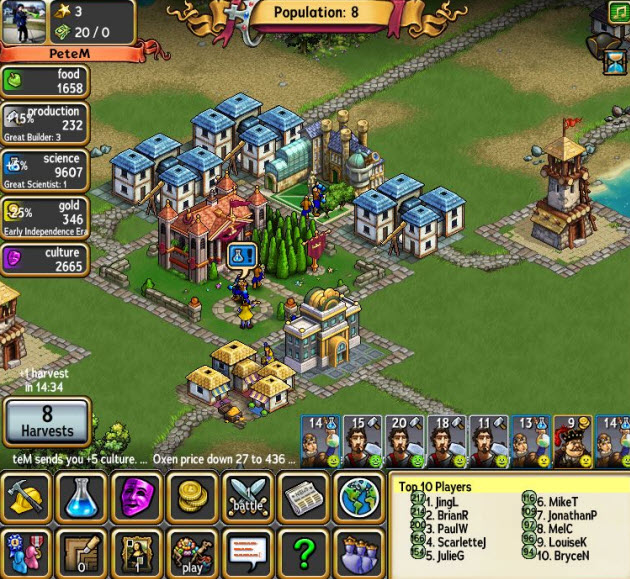 Sid Meier’s Civilization World is finally close to coming out of an insane development cycle. Sid Meier, the acclaimed game developer at Firaxis and creator of the  Civilization strategy game series, has been working on the Facebook version of the game for more than 20 months. It will be interesting to see if it is worth the wait, since the addictive game play of Civilization and the time-wasting nature of Facebook seem like they’re a really good match.

The game is really important because it represents a known brand that millions of gamers already love and would love to see appear on their favorite social network. It is also an attempt to take social gaming to another level, one that involves a laser focus on game play and true social gaming, where players collaborate inside the game. The brand is also likely to attract a lot of attention on Facebook, since Meier is known as one of the greatest game designers of all time.

Firaxis first announced that it was working on a game called Civilization Network in October, 2009. Since many Facebook games are developed in as little as six weeks (FarmVille fits in this category in some respects), a 20-month development cycle for Civilization World (as it has been renamed) is unheard of. Since the game is only beginning its closed beta testing, and the open beta isn’t due to begin until this summer, it’s still not exactly clear when the game will be available for users. 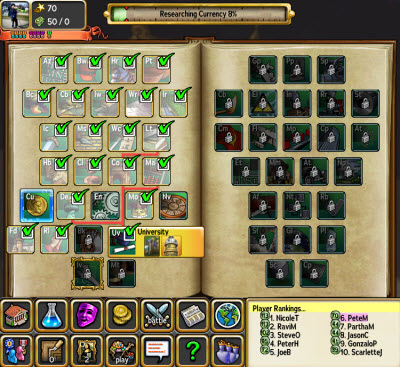 This is a good thing in some ways, since Meier is “hand-coding” the game, says Tiffany Nagano, associate producer at 2K Games, (a label of Take-Two Interactive), which is publishing the game. Meier is meticulous and is known to focus ruthlessly on making his games fun. In fact, he worked for years on a game called Dinosaurs — and decided not to do it because it wasn’t fun. That suggests that the game is commanding a huge amount of Meier’s time, and it has certainly made me anticipate the game.

The game is very ambitious, based on a briefing I attended in San Francisco, where I was able to play it with a small group of others. You start by creating your own capital city, and your goal is to compete against both friends and rivals to create the greatest civilization in the world. It is a persistent world, but it can have a start and an end for the competition between civilizations.

The game spans the age of known civilization, from ancient times to the space age and beyond. At its core, it is a collaborative strategy game. You work with other people toward a goal. You start with a meager palace on a tract of land. You have to build a house for a citizen. Then you assign the citizen a task, such as being a farmer. You build a garden and then the citizen will start farming the land and taking harvests back to the palace. You can grow lots of trees to make scientists happy and attract more of them to your city.

You keep collecting various kinds of resources in this fashion so that you can build out your city. It actually matters that you place your house close to the palace so that your farmer doesn’t have to walk so far. The point is that you can make a series of smart or bad decisions. It isn’t just random game play. If you place an orchard near water, you get 25 points for your harvest rather than 10. The game rewards you for paying attention to the details.

Over time, you want to cultivate more food, production capacity, science, gold and culture. Some tasks you can do together with friends. For instance, you can unscramble a mixed up image so to see what the real image looks like. Your friends can help you do this in a timed test. There are a bunch of mini games that allow you to win more resources.

The multiplayer aspect comes in when you join an alliance with lots of other players. Your players can help you or team up in battles against rival empires. Each team races to complete an era first. The team that wins a round will get more reward points. As many as 200 people can participate in a game at a time, so you won’t see gigantic empires.

In a nod to Facebook’s more casual audience, the combat system is fairly harmless. You can’t raze someone else’s city and you can’t attack an individual. Rather, the combat takes place only between major alliances. In the battles, you pick which units you want to take into battle, and the outcome is resolved instantly, with no animations that show what happens in the battle. As a hardcore gamer, I would prefer a greater emphasis on combat, with better animations. But it’s nice to know you can’t be attacked while you are sleeping. 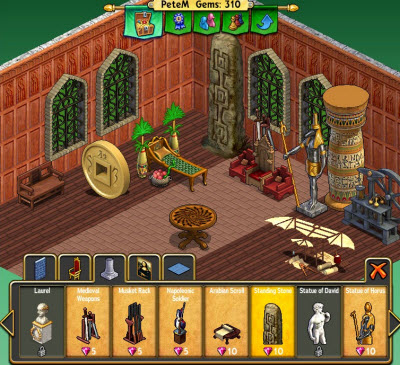 Civilization World lets you show off your collection of achievements and the other cool artifacts you win in the game in your throne room, pictured right.

You can buy things in a market. One of the cool aspects is that the market prices for virtual goods fluctuate with supply and demand.

There is a full-blown technology tree, which graphically shows the path you have to follow to develop certain technologies over thousands of years, from the wheel to the printing press. The tech tree is a staple of Civ games.

You can also consult the Civilopedia, an encyclopedic resource that describes all of the buildings, units, wonders, technologies and civic items in the game.

The music from the game is from Christopher Tin, who won a Grammy award for his Baba Yetu song in Civ 4. At the outset, you can only play one city at a time. But over time, you can control multiple cities. As with the other Civ games, you can win a game in multiple ways. You can get a cultural victory by building the most wonders. Or you can get a military or economic victory.

Overall, the game allows for different play styles. But it rewards you for engagement and pursuing a global strategy.