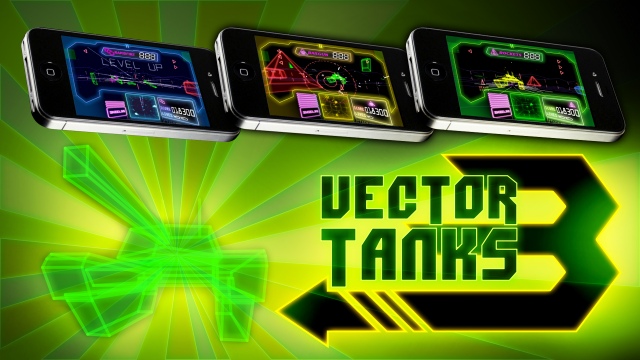 “Anything that has even a passing resemblance to an Atari classic has been issued a copyright infringement claim,” claims Vector Tanks production company Black Powder Media. “So – thanks to their special relationship with Apple – Atari has successfully scrubbed the app store of their perceived competition. It looks as though Apple complied without so much as a rebuttal or independent evaluation.”

Vector Tanks programmer Peter Hirschberg commented to VentureBeat: “The cruel irony here is that I tried for years to get ahold of Atari to license their IP but they seemed to have fallen off the planet. Now this. It’s very depressing.”

Vector Tanks is a crude-looking 3D tank combat game in which the player navigates a tank through a barren game 3D world and shoots at wireframe objects. The resemblance to the 1980 arcade game Battlezone is hard to ignore, but the gameplay and the graphics are so simple that the crackdown seems baffling. “I’m pretty sure you can’t copyright the idea of a tank game made up of lines,” quipped one user on TouchArcade.

In light of threatened legal action, Black Powder Media has pulled Vector Tanks and Vector Tanks Extreme from the app store because “It doesn’t seem to matter that the game bears only a vague resemblance to Atari’s Battlezone.”

If Atari is about to quench every iPhone game that somehow resembles one of its intellectual properties, then Vector Tanks won’t be the last app to disappear from the face of the app store. Countless games, iOS or otherwise, have been inspired by and paid homage to Atari classics. For example, the popular Space Miner is loosely based on the gameplay of 1979 coin-op Asteroids, though it bears a different visual style and additional design elements. Atari itself recently released an official new Asteroids Gunner iOS game that was criticized for the way it implemented microtransaction payments to unlock game content. The legal action against Vector Tanks could be a sign that Atari is working on a new app based on its Battlezone IP and wants to get rid of unlicensed competition.

But Atari’s actions might also cause a negative consumer backlash, as most gamers don’t look too kindly on corporate lawyers that are giving indie game developers a hard time. The Elder Scrolls V: Skyrim publisher Bethesda has a PR nightmare on their hands since threatening legal action against Minecraft developer Mojang over the use of the word Scrolls as a game title. Bethesda claims that consumers might confuse the Scrolls game with their very own The Elder Scrolls franchise. However, after selling over 4 million copies of Minecraft, Mojang has the means to afford a legal battle. “We’re totally going to court over the whole Scrolls / Skyrim thing,” posted founder Markus “Notch” Persson on his personal blog.

In order to remain safe from challenges by Atari’s legal department, Black Powder Media are turning Vector Tanks 3 into The Visceral Adventures of Vic Vector: “In our storyboards, agile and deadly hovercraft and air based attackers had already replaced the slow moving tanks of vintage earth wars. Vic Vector truly is a ‘new classic’ that cannot fall under the Atari claw.” Supporters of the cause can still pledge funds to the project at Kickstarter.