Atomontage has launched an early version of its microvoxel technology that it says offers a new way of creating computer graphics for video games and computer simulations. The advantage of the cloud-based volumetric graphics is that it uses breakthroughs in 3D data compression so that it becomes a lot easier to share 3D imagery with vast amounts of detail.

The startup Atomontage has been working on the tech for more than four years, but the idea behind it goes back decades. Voxels used in games like Minecraft are a good example of the technology, but in a kind of crude form as they’re relatively big Lego-like bricks that are used to construct images. But Atomontage’s voxels are so small — they’re called microvoxels — that they can be used to create much more fine-grained images than other types of graphics.

It’s kind of a tall order to tackle the omnipresent polygon, the basic building block of computer graphics, which has been a staple of games and other graphics applications for decades. But CEO Branislav Siles in an interview with GamesBeat that he hopes the tech can become akin to the JPEG of 3D, using the same kind of compression techniques to share graphics on the web as you can with the JPEG format for displaying photos. The company is showing off the tech at Slush, the big startup conference in Helsinki, Finland this week.

The current tech is a “minimum viable product” version of the Atomontage platform for shared volumetric worlds, which the company calls “montages.” It is now available in open beta. The Atomontage platform solves complex data problems by replacing traditional vector-based meshes with efficient, volumetric, sampled geometry that can easily and always be changed, reducing many technological barriers that have previously prevented the widespread creation and consumption of realistic 3D content, said Siles. 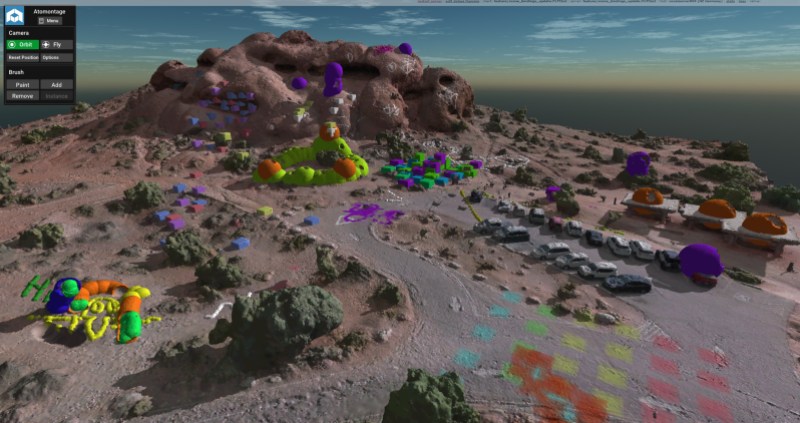 Above: Atomontage has been in the making for nearly 20 years.

The concept of little cubes in space, or 3D pixels, has been around in the computer science literature since the 1970s. And it’s almost like VR, where it was promised for decades and wasn’t really ever viable.

The Stockholm and Bratislava, Slovakia-based company (with official headquarters registered in Delaware) is taking advantage of nearly 20 years of research and development in replacing polygons with small cubes for 3D graphics. One of the problems with polygons is they are kind of like “shell graphics,” or hollow on the inside, and they were meant to enable 3D on less powerful computers. But today’s computers have the ability to render voxels better.

Images will consist of trillions of microvoxels, said Dan Tabar, president of Atomontage, in an interview with GamesBeat. And you can interact with them in real time. If there is a bee hive, you could reach into it and pull out the honey, or chip away at a rock until you find the exact sculpture you want. 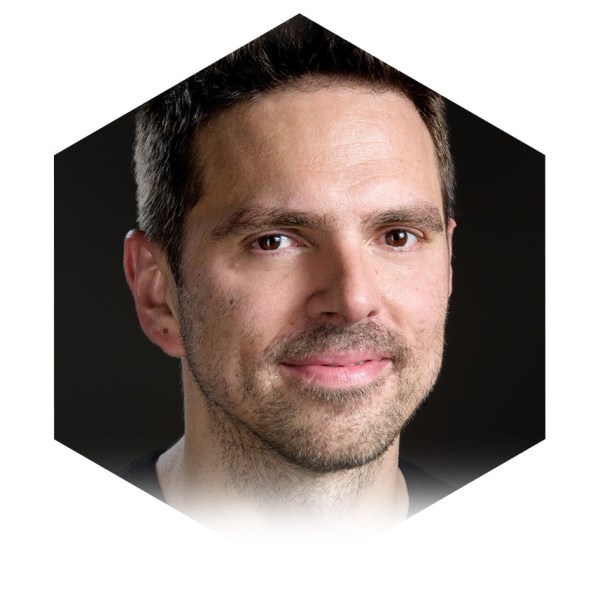 Above: Branislav Siles is CEO of Atomontage.

Siles’ work nearly two decades ago was the inception of a very long journey. And so today’s open beta is an important milestone, said Tabar.

Siles was creating demos for competitions a couple of decades ago, and instead of going with what was used at the time — polygons — he asked what would be the right solution for computer graphics.

“A voxel engine is an umbrella for very different technologies that can be used together,” he said. “With it, things that were extremely hard to do, or even impossible to do with polygons become quite easy, like the editing of geometry.”

Polygons were the expedient choice at the time, but they represented a kind of wrong turn, Siles said. 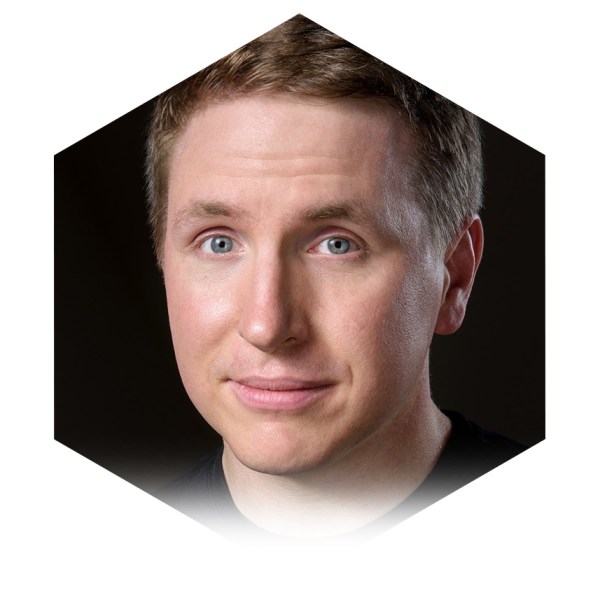 Above: Dan Tabar is president of Atomontage.

“I had this vision of really detailed simulated worlds that actually work, and simulation was a thing those polygon technologies didn’t do very well,” Siles said. “Polygons are basically skin deep representations. But they don’t allow you to do really much on the simulation angle.”

For instance, polygons can be used to place a texture on a 3D cube. But if you chop that cube in half, the imagery doesn’t work anymore. For that, you need microvoxels that can simulate every piece of the box, including its type of material, and then see it naturally break into the correctly proportioned pieces when you chop it in half.

Tabar met Siles while working on a game that simulated things in a similar way.

“It really surprised me how powerful this representation of where everything in the world was built out of these atomic building blocks, ” he said. They finally got together four years ago to turn the thinking into a company. 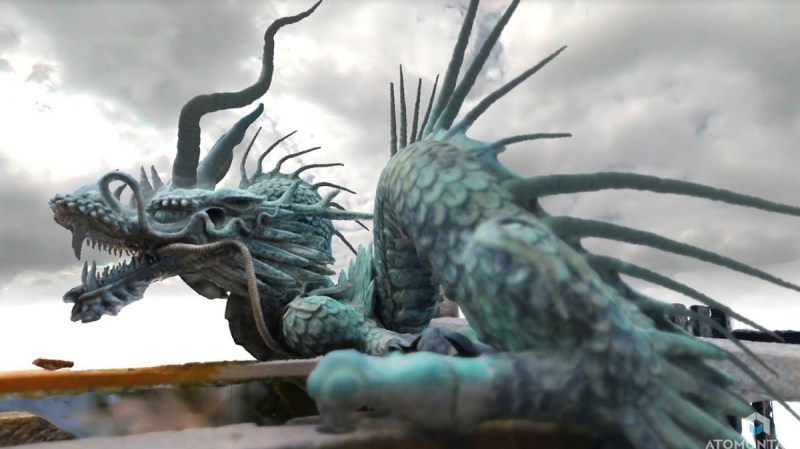 Above: This dragon is made of microvoxels.

Content creators can source, edit, and remix assets easily, while end users will enjoy the deeply interactive experiences across a wide spectrum of today’s most common PC, mobile, AR, and VR hardware.

The authoring platform is in the cloud. Creators upload their content and it is converted into montages in the cloud, Tabar said. Open beta creators — also known as Montage Makers — can upload heavy volumetric data through the Atomontage platform’s web interface, voxelize it in the cloud, and then share it via a URL to end users who can view and interact with the resulting content in seconds — no cumbersome software installation required.

“There’s an entire generation right now that grew up building and sharing their own content in connected virtual worlds,” said game designer Cliff Bleszinski, an early investor in Atomontage, in a statement. “Microvoxels will be the literal building blocks of our shared, connected future, and this solution puts them in reach of everyone. Powering the necessarily volumetric mirror worlds of tomorrow is going to take a complete rethinking of the core technologies that connect us today, and Atomontage is building what’s needed to get us there. This technology is thrilling.”

3D content can be uploaded from a growing list of supported 3D types (including image stacks and legacy voxel formats) and converted to the universal Montage format — or created directly on the platform using sculpting tools. Additional import formats, including textured meshes, point clouds, and CAD models, will be added to the beta in the near future. 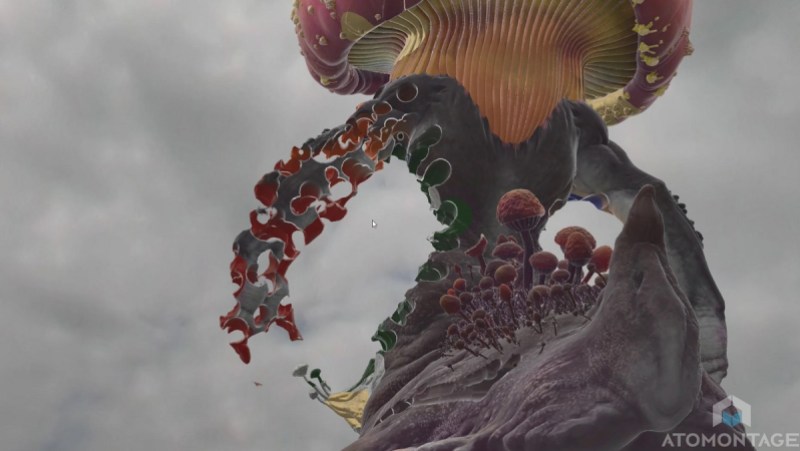 “Efficiently handling the data needed to power large and detailed virtual worlds will require sophisticated solutions in both data compression and management, which took over 20 years of R&D for my cofounder Branislav Siles to overcome,” said Tabar. “Replacing vector-based meshes with voxels unlocks a universe of new possibilities, but only if you have a way to process them fast enough to keep up with real-time simulation at high enough resolutions for both realistic games and uses beyond entertainment. That’s what our Atomontage platform does — and starting today, you can go hands-on to see for yourself.”

Siles said the company had to work on some fundamental breakthroughs in compression to get to where it is.

“The client we’re launching now is the thinnest web browser based one that you need to install anything,” Siles said. “When you receive one of these Montage links, you click on it, and within seconds, you’re in the world exploring it with whoever else is in there as well, at the same time. You can actually see all the changes that people have made to these worlds prior to your last visit. You will see all them in a game, for example, all the battle damage and things that have happened, since the last time you connected. So these things are persistent. And this is a big part of what took a long time for us to make it all work, where trillions of voxels can be accessed quickly enough for physics simulations, but also the streaming aspect where it gets sent from the server where all the simulation is happening to clients.”

Microvoxel-based approaches to real-time 3D have uses across industries well beyond gaming, with health care, retail, film, and many more that stand to benefit from Atomontage’s technology. 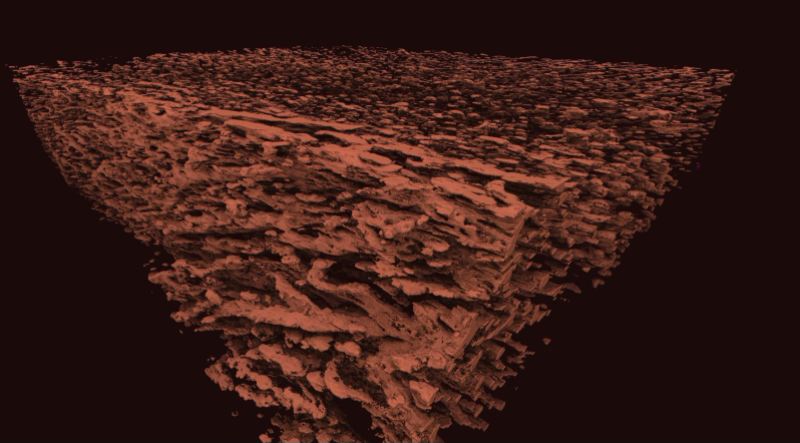 One researcher is using the tech to represent brain tissue in enormously complex simulations of the brains of Alzheimer’s disease patients.

“We have been using the Atomontage closed beta for about a year as part of our research into brain diseases such as Alzheimer’s,” said Jan Mulder, a researcher at the Karolinska Institute in Stockholm, Sweden, in a statement. “To get a better understanding of what’s actually happening in brain tissues, we need to look at several thousands of individual neurons at a time. The 3D datasets that our light sheet microscopy creates are so large and detailed that we could not easily edit, explore, and share them until we started working with the Atomontage platform.”

“It’s an incredible amount of data at 20 gigabytes or up,” Tabar said. “And they just didn’t have a solution on how to visualize this.” A browser only has 2 gigabytes of memory available for graphics applications.

There are a variety of other contenders for graphics standards, such as Pixar’s Universe Scene Description, which can be used across platforms and applications linked through Nvidia’s Omniverse.

The company is still small, with a team of 13 people. Atomontage raised $3.5 million in the summer, and it added some more angel investors like Bleszinski, Hilmar Petursson, and Tommy Palm.

Over time, the client will run on platforms such as iOS and Android, as well as virtual reality systems.

“There are a lot of things in the works that are coming,” Tabar said.