The augmented reality and virtual reality markets have yet to get off the ground. But market advisor Digi-Capital estimates that the combined markets will reach $150 billion by 2020.

Digi-Capital managing director Tim Merel believes that augmented reality — where you can add a virtual overlay to glasses that enable you to see the real world in a new way — will be four times bigger at $120 billion than virtual reality, which immerses you in a virtual world via goggles. Merel estimates that virtual reality will be more of a niche market at $30 billion by 2020. In 2016, Merel believes the market will be “single-digit billions.”

“VR [virtual reality] and AR [augmented reality] are exciting — Google Glass coming and going, Facebook’s $2 billion for Oculus, Google’s $542 million into Magic Leap, not to mention Microsoft’s delightful HoloLens,” said Merel in a statement. “There are amazing early stage platforms and apps, but VR/AR in 2015 feels a bit like the smartphone market before the iPhone. We’re waiting for someone to say ‘One more thing …’ in a way that has everyone thinking ‘so that’s where the market’s going.”

Merel acknowledges that a “pure quantitative analysis of the VR/AR market today is challenging, because there’s not much of a track record to analyze yet.” But he believes VR/AR are compelling enough to grow new markets and cannibalize existing ones after the technology really starts taking off next year.

“VR and AR headsets both provide stereo 3D high-definition video and audio, but there’s a big difference,” Merel said. “VR is closed and fully immersive, while AR is open and partly immersive – you can see through and around it. Where VR puts users inside virtual worlds, immersing them, AR puts virtual things into users’ real worlds, augmenting them.

“You might think this distinction is splitting hairs, but that difference could give AR the edge over not just VR, but the entire smartphone and tablet market. There are major implications for Apple, Google, Microsoft, Facebook and others.”

Merel said that VR is great for games and 3D films. However, he sees it primarily as a living room, office, or seated experience, as you might bump into things if you walked down the street wearing a closed headset. 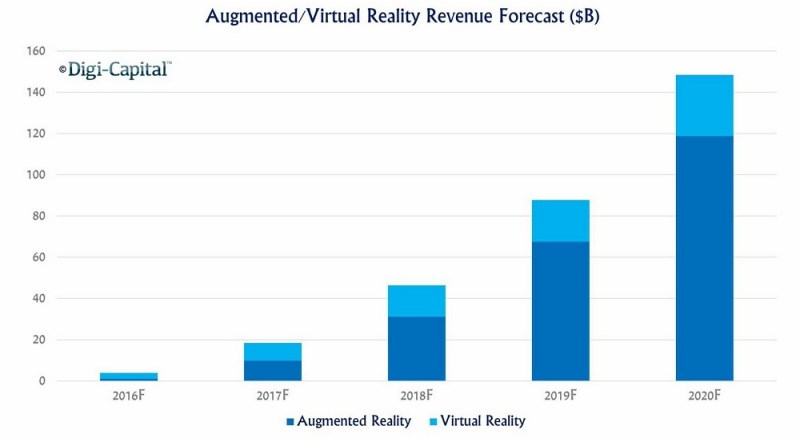 Above: Augmented reality is expected to outpace virtual reality growth.

He expects that it could snare tens of millions of fans among console, PC, and online gamers as well as those who prefer 3D to 2D films. VR will also have niche markets in enterprises, medical, military, and education markets.

AR, meanwhile, can be fun for games, but not as much fun as VR when true immersion is required.

“But that possible weakness for gamers is exactly why AR has the potential to play the same role in our lives as mobile phones with hundreds of millions of users,” Merel said. “You could wear it anywhere, doing anything. Where VR is like wearing a console on your face [Oculus], AR is like wearing a transparent mobile phone on it [Magic Leap, HoloLens].”

He said that AR could play a similar role to mobile across sectors as well as a host of uses nobody has thought of yet. He foresees uses in e-commerce, voice calls, web browsing, film and TV streaming, enterprise apps, advertising, consumer apps, games, and theme park rides.

“There could be meaningful enterprise VR revenues, but we think that AR could take more of that market,” Merel said. “We think AR’s addressable market is similar to the smartphone/tablet market. So AR could have hundreds of millions of users, with hardware price points similar to smartphones and tablets. This could drive large hardware revenues for device makers.”

Merel said both technical and social issues (privacy) still have to be worked out.

As for the companies leading the charge, Merel said “Facebook placed an early bet on Oculus, which might win VR but not address the larger AR market. Google learned from Glass, and had the foresight to invest in Magic Leap. HoloLens could allow Microsoft to regain the glory it lost to Apple in the last decade. And Apple? We would love to see an augmented ‘One more thing … .'” 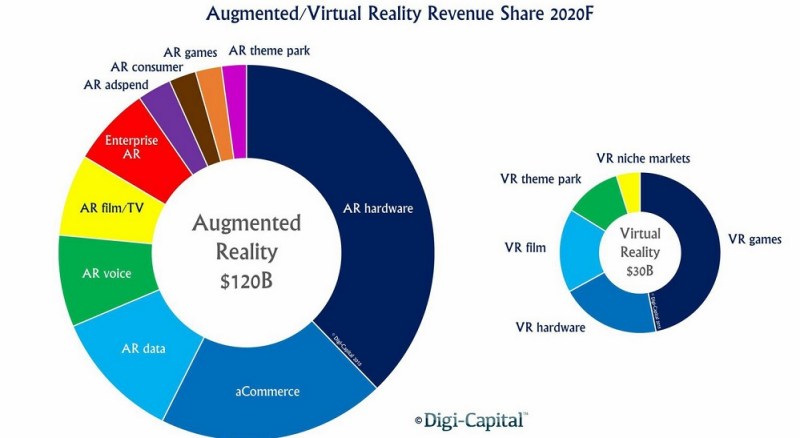