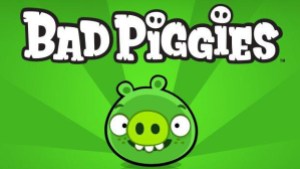 Developer Rovio has been taking some time away from the renowned Angry Birds franchise to explore other facets of mobile gaming. The Finnish studio’s previous attempt, Amazing Alex, received mixed reactions with its remake of The Incredible Machine. Bad Piggies returns to the Angry Birds genealogy, except this time it shows us the perspective of the pigs … without any menacing fowl.

Bad Piggies offers a generous mix of physics-based gameplay and vehicle creation. The game (out now for iOS, Android, Mac, with PC and Windows Phone coming soon) gives players an assortment of parts and expects them to get across each level’s finish line to earn a star and move to the next challenge. Ambitious gamers can earn two additional stars (three in total) by either collecting them within levels or by completing specific tasks (like not using a certain part or finishing within an allotted time). Parts include varied items such as wooden boxes, engines, and balloons and wings for flight. 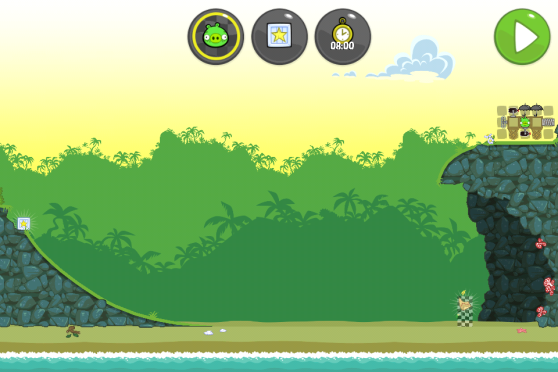 Gameplay may sound simple enough, and the touch controls and basic mechanics make getting around in the game easy, but the difficulty curve is light-years away from what mobile gamers familiar with Angry Birds are used to. Spending a half-hour on a single level is more common than you might expect. That’s not to say that Bad Piggies is too difficult; just know that if you buy this game thinking that it’s another Angry Birds, then you’re greatly mistaken.

Once players get over how incredibly challenging Bad Piggies can be, which can take some time, it becomes fun and rewarding. The difference between the two games is simple: Angry Birds has simple puzzles whereas Bad Piggies has complex ones which require you to continue playing even after the vehicle’s been made. Players have complete control over their creations; they don’t just toss a bird and forget or launch one more with the right timing. You must control every aspect of the game.

Lots of levels that save properly

Like all Rovio titles, Bad Piggies starts out with a ton of levels to play through: 72 standard levels, 18 collectible bonus levels that must be unlocked, and five sandbox levels. Each level takes at least a minute or two to complete, up to 30-45 minutes for more challenging maps. It can take days, or even weeks, to complete and collect everything. And, like with all Rovio games, the developer will add more levels for free in the future.

The five Sandbox levels may be the most fun Bad Piggies has to offer. They are massive maps with nothing but 20 stars to collect, and they provide all of the vehicle parts that players have earned from completing the “campaign” levels. By giving you the potential to build thousands of vehicles, these levels give players the creative freedom to assemble contraptions such as motorcycle air balloons and air-glider, coke-bottle-driven cars.

A smart checkpoint system keeps it all together by saving every vehicle you build. It may sound trivial, but starting from scratch because of a crash or because the app was shut down would be a terrifying prospect. 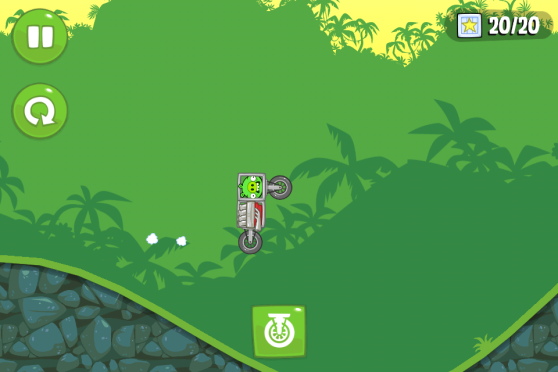 If you’re stuck, cheat, pay, or give up

Rovio is no stranger to microtransactions, but Bad Piggies’ occasionally extreme difficulty may already be a big enough turnoff. Because levels can’t be skipped, if players get stuck, there are only three options: cheat (look up how to beat the level), pay at least $2 for a “mechanic” to build the simplest vehicle to reach the finish line, or, of course, give up.

With a quick nod on Facebook, players get three free mechanics, and in reality, the pricing isn’t so terrible. The inability to skip levels, however, is.

The overall difficulty isn’t gruesome, but for mobile players who want or expect a casual game, Bad Piggies will seem like a stretch. It certainly works for waiting in the doctor’s office or in line for ice cream, but that only goes so far. If you’re impatient, need immediate victory, didn’t grow up with games, or are just so used to today’s constant barrage of political correctness and the need to always win, then Bad Biggies is not the game for you.