Making Baldur’s Gate: Siege of Dragonspear is like a trip of “back … to the future” for the artists, writers, and designers at Beamdog Games.

Sure, they’ve been working on the enhanced versions of Baldur’s Gate and Icewind Dale for some years now, even creating some new characters for the beloved D&D-based role-playing games. Siege of Dragonspear, however, is an original creation.

One that’s more than 100 years behind the current Forgotten Realms timeline.

“It was a challenge — I can say that for sure,” Beamdog writer Amber Scott said. “You feel a bit like a time traveler, going through these 2nd-edition modules and rulebooks to determine what exactly what has happening in the Realms around the time of the Bhaalspawn saga. It was in the forefront of our minds that as we wrote the story, we had to make something that would fit in that time frame and work with all the events that were going on in the Realms at the time.”

And it’s happening in a timeline that publisher Wizards of the Coast has retconned as well. 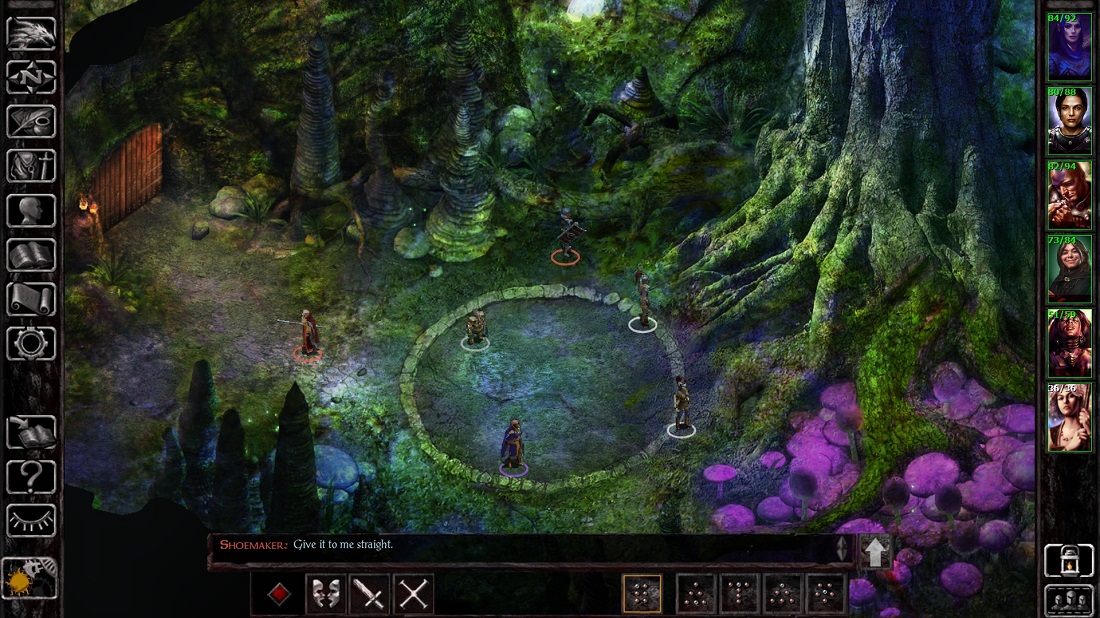 Above: The caverns underneath Dragonspear Castle look … green.

A journey into the past

The Forgotten Realms were already showing their age when the first Baldur’s Gate debuted in 1998; the 2E AD&D rules debuted in 1989, and the setting’s first campaign book for those rules appeared in 1990. Looking back today, the source material is ancient — and outdated.

“Back then it was a bit of a Wild West scenario. A lot of information doesn’t jive with other parts of the lore,” Daigle said. “Digging up all these cool hooks in that era of D&D, we’d often have discussions with Wizards where they’d say, ‘That’s great, but we’ve changed the history in later editions, so you’ll need to change that to fit with our modern timeline.’ There was some back-and-forth, a lot of research, a lot of discussions with Wizards to make sure we were in line with their current lore and not stepping on any old lore they established 20 years ago.”

While Dragonspear Castle does have a module with its name on it, this was for the large-scale combat system that D&D once had. The site itself had a great deal missing — an enticing prospect for Beamdog’s writing staff.

“The most fun, especially as a writer, was when we found holes in the lore, or parts of Dragonspear’s history that were not explicitly laid out,” said Scott, who had never adventured near the famed site. “For example, in the module where you get to go to Dragonspear Castle, there’s a section that just says, there are tunnels underneath the castle. It’s up to the DM to decide what they look like. When you find something like that, it’s exciting as a writer. You get to create part of the history of the Realms, in a way.”

And what was the most interesting thing that Beamdog added?

“There’s quite a bit to choose from here. I’d say that for me, the representation of Boareskyr Bridge, the site where Bhaal died before the game begins, is kinda cool. It’s never been seen in a game before,” Daigle said. “We got to define what it looks like, what the nearby settlement looks like, and how this place flowed. The bridge was mentioned in novels and publications and stuff, but it was never visually represented. Now we get to put a face to this iconic location where a god was killed.”

And of course, the water runs black downstream from where the God of Murder met his fate. “We’re big lore nerds, so we made sure we didn’t mess that up,” Daigle said. 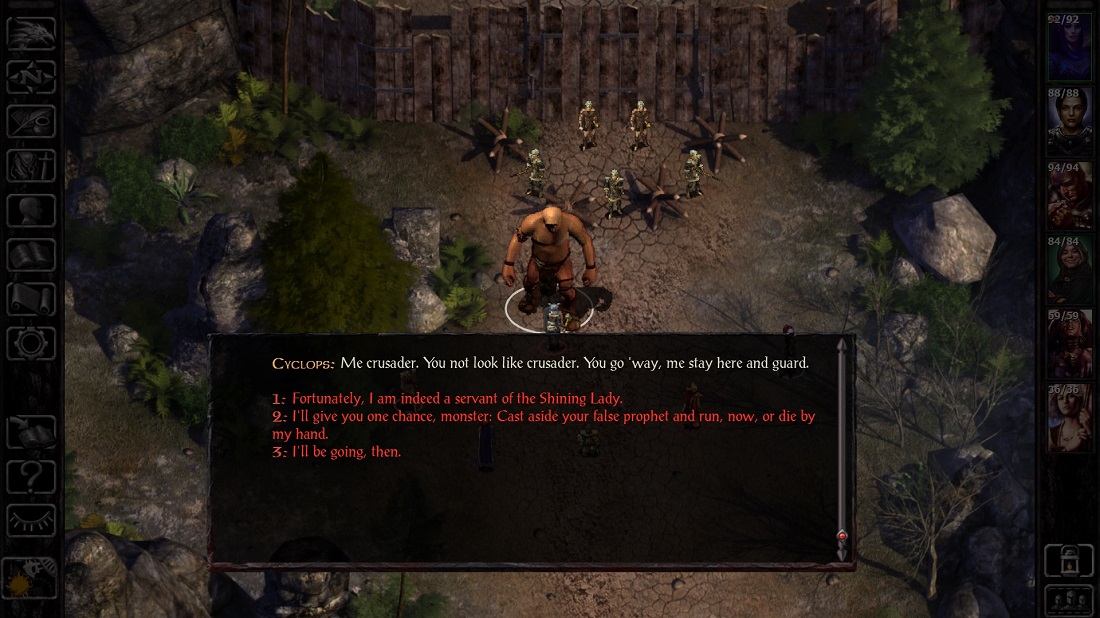 For the enhanced editions of Baldur’s Gate, Beamdog stuck with the second edition rules of the time. This includes the character classes and monsters that the design team has added. But the studio has dipped into other editions, like with player kits (the Blackguard prestige class from third edition, for example).

Monsters are a special subject. Some have changed over the years in power and scope. But unless Wizards has retconned a creature into the past, Beamdog sticks with the 2E incarnation of the monster. So the Cyclops that’s in the first set of screenshots that the studio released doesn’t have any of the fae-like powers Wizards gave the monsters in subsequent editions.

“For the most part, we always favor second edition, except when Wizards steps in and says, actually we’d like to retroactively change that, because in our more modern editions things are different, and we want to be consistent,” Daigle said. “For some monsters, they didn’t really want to update them from second edition, but for certain ones they did. I can’t say which ones specifically, but in the case of the Cyclops we stuck with the second edition representation.”

“To create a new monster with new animations and everything is a very costly process for the Infinity engine. I will say that we have added some new monsters to Baldur’s Gate in Dragonspear, monsters you’ve never seen before. This monster actually, I believe, came from third edition. But for the most part, we stick with second edition monsters that were available in BG 1 and BG2 and Icewind Dale.

Dragonspear Castle is notorious. It didn’t start out as a place for evil, but over the centuries, it became infested time and again by evil humanoids and devils. Tunnels underneath the keep connect to the Underdark and a lost dwarven city.

“Dragonspear Castle has always had this interesting history of stuff going on, a lot of neat story hooks we liked. The proximity of Dragonspear as a major location to Baldur’s Gate made it a no-brainer,” lead designer Philip Daigle said. ” This is a cool location. … It’s not full of really important characters. There are similar dungeons nearby, but they have big-name characters from D&D there, and we didn’t want to mess with them. Dragonspear was the right combination of features and proximity for a good adventure.” 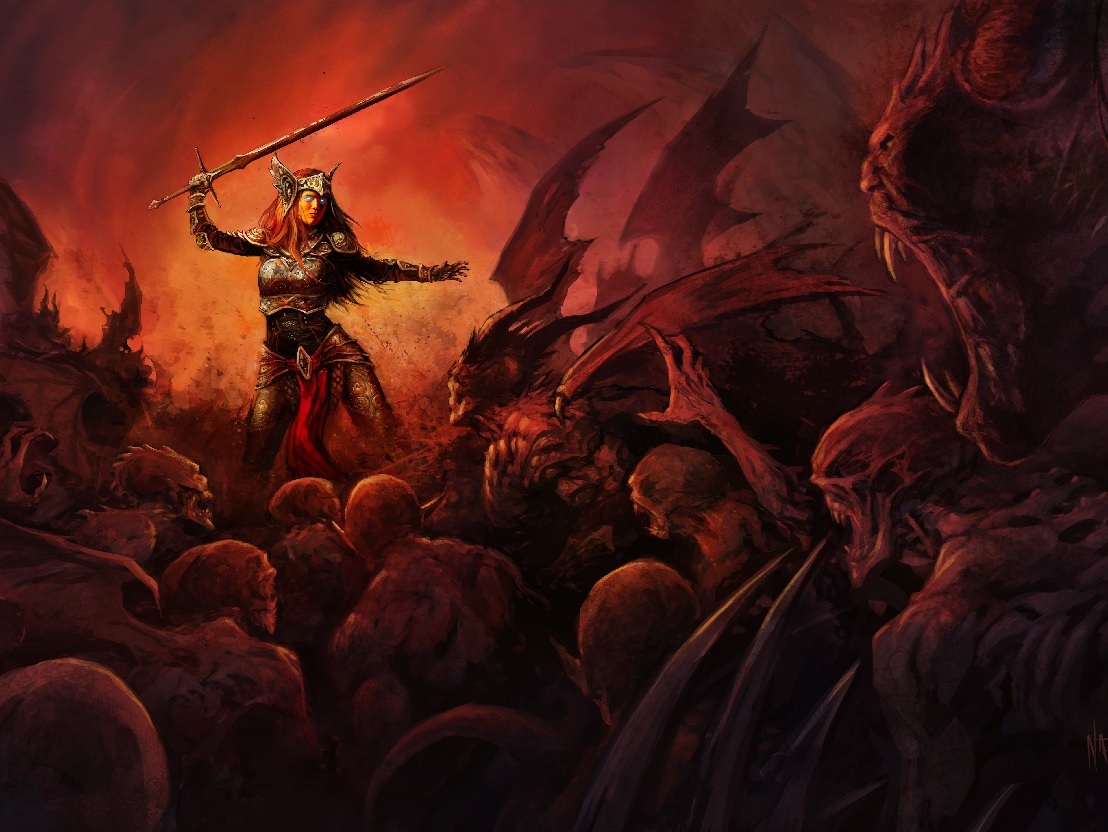 Above: Siege of Dragonspear is a new expansion for Baldur’s Gate — a game from 1998.

A even more mysterious adversary

A warrior known as the Shining Lady leads a crusade in the north (the Sword Coast, where many Forgotten Realms games are set). Rumors point to her being the child of a god — like your character, who is the issue of the dead Lord of Murder, Bhaal.

Beamdog isn’t ready to confirm whether the Shining Lady is in fact a fellow Bhaalspawn, as the player is in the other two BG games.

“I don’t think we ever said that [she’s a Bhaalspawn], did we?” asks Amber Scott, a writer on Siege of Dragonspear.

“Yeah, I don’t think we confirmed that,” Daigle volleys back before providing more context. “There are little hooks in our story, rumors, intrigues that the player is going to get in and learn about for themselves. Yes, there are rumors that the bad guy of this module is a Bhaalspawn, but for now, we’ll just leave those as rumors.”

The Dragonspear setting and tiptoeing around her status as a Bhaalspawn makes the Shining Lady’s background even more intriguing; the castle has long hosted a small shrine to the God of War, Tempus. Are we dealing with someone who’s been blessed by another god?

“The antagonist of Dragonspear — they ostensibly have the favor of the good gods,” Daigle said. “That’s definitely how they present themselves. As you play through the adventure, you’ll discover for yourself how things turn out. That’s one element we want to hold back until players get a chance to play it.”

Shadows of the future?

Players love the Baldur’s Gate games in part because of all of the Forgotten Realms lore that BioWare and then Beamdog has packed into the series. But I’ve always wondered … couldn’t someone write some allusions to future events: the return of Nethril, hints of the Spellplague — you know, that wonderful insider knowledge that, to a game’s characters, would come off as hints of future disasters.

That’s not happening in Siege of Dragonspear.

“As much as we wanted to create new stuff and put our mark on the Realms, we were conscious that we want players to feel comfortable playing this game and knowing it’s a second-edition Forgotten Realms game. It fits with the Enhanced Editions,” Daigle said. “We didn’t want to put in a lot of nods and winks to later editions and more modern material. It’s going to be fresh and nostalgic at the same time.”

So, don’t expect any crazy cat ladies predicting the death of Mystra.

“That’s going to be in the next game,” Daigle said.