I know how the Child of Bhaal’s story ends. But what I didn’t know is what happens between the defeat of Sarevok in Baldur’s Gate and your capture at the hands of the demented Jon Irenicus at the start of Baldur’s Gate II.

Thanks to Siege of Dragonspear, a new Baldur’s Gate storyline wedged between the first two games, we learn more about the Bhaalspawn’s fate, how they draw Irenicus’s attention … and how their legend grows after defeating a major threat to the Sword Coast, the west coast of adventure, intrigue, and trade in the Forgotten Realms campaign setting in Dungeons & Dragons.

We also see what lessons the Beamdog studio has learned on making its first role-playing game after two enhanced editions of Baldur’s Gate (on PC, Mac, and Linux), how developers can still push the ancient Infinity Engine to do new things nearly two decades after its debut, and how new writers can add to the growing business of retro games. 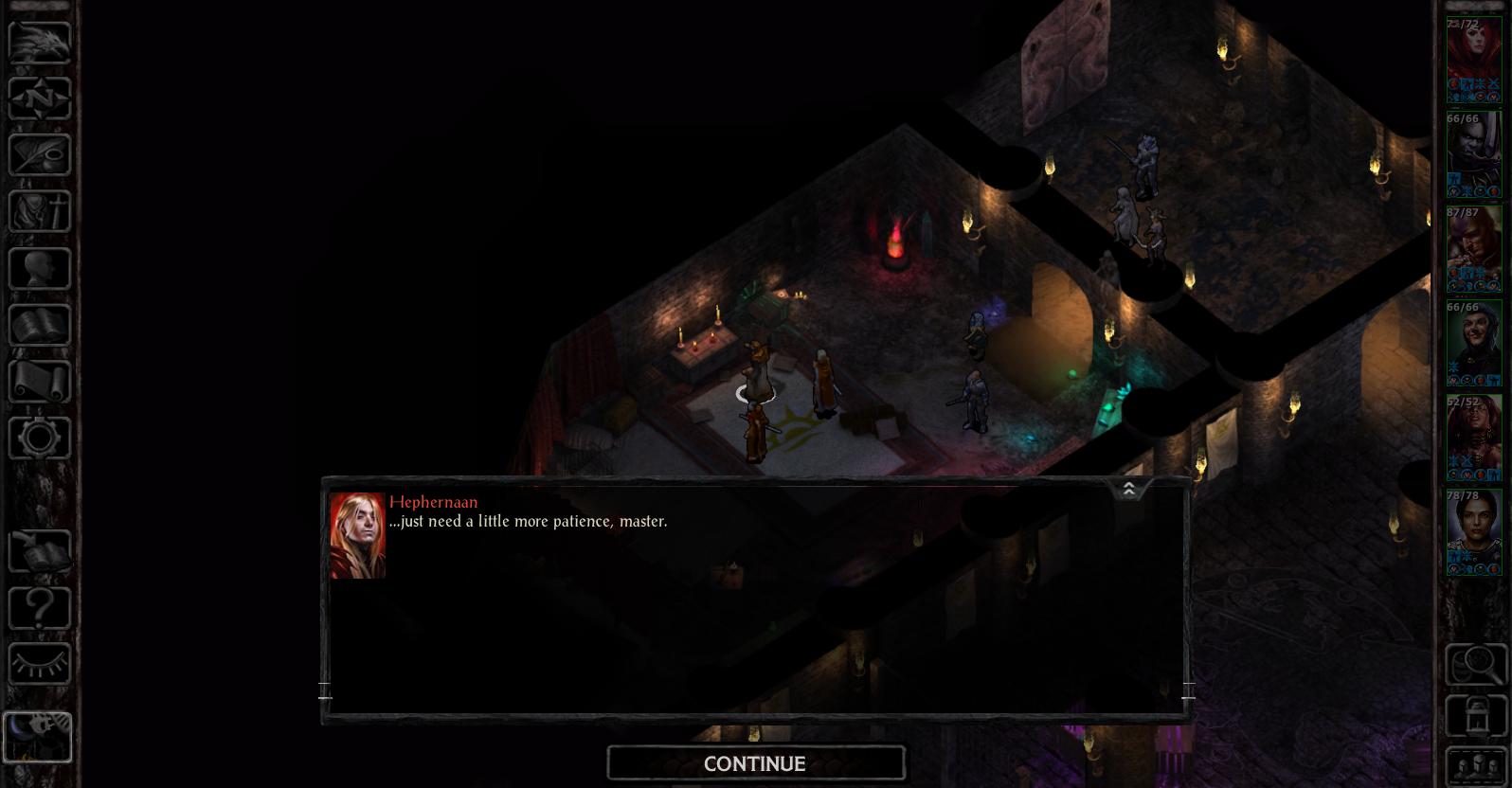 Above: Who’s this “master”?

In the old Baldur’s Gate games, it’s clear who your enemies are: Sarevok and Jon Irenicus. Siege of Dragonspear shows that your enemy isn’t as clear-cut as you think. You start out in a quest to defeat The Shining Lady, a god-touched being who is leading a great crusade based out of the ruins of Dragonspear Castle. But as the story advances, you find out another, more malevolent power is at work (one that ties into the current storylines for the Forgotten Realms and the considerable history of Dragonspear).

I found this satisfying. While it’s not a plot twist, it does show a more layered approach to storytelling than the other games in this series. And as you’re infiltrating the innards of Dragonspear, you end up asking yourself if you want to help these crusaders in some instances.

Oh, and Jon Irenicus pops up from time to time to foreshadow the next game. He’s just “the hooded man,” but you know it’s him from his role and actor David Warner’s iconic performance. 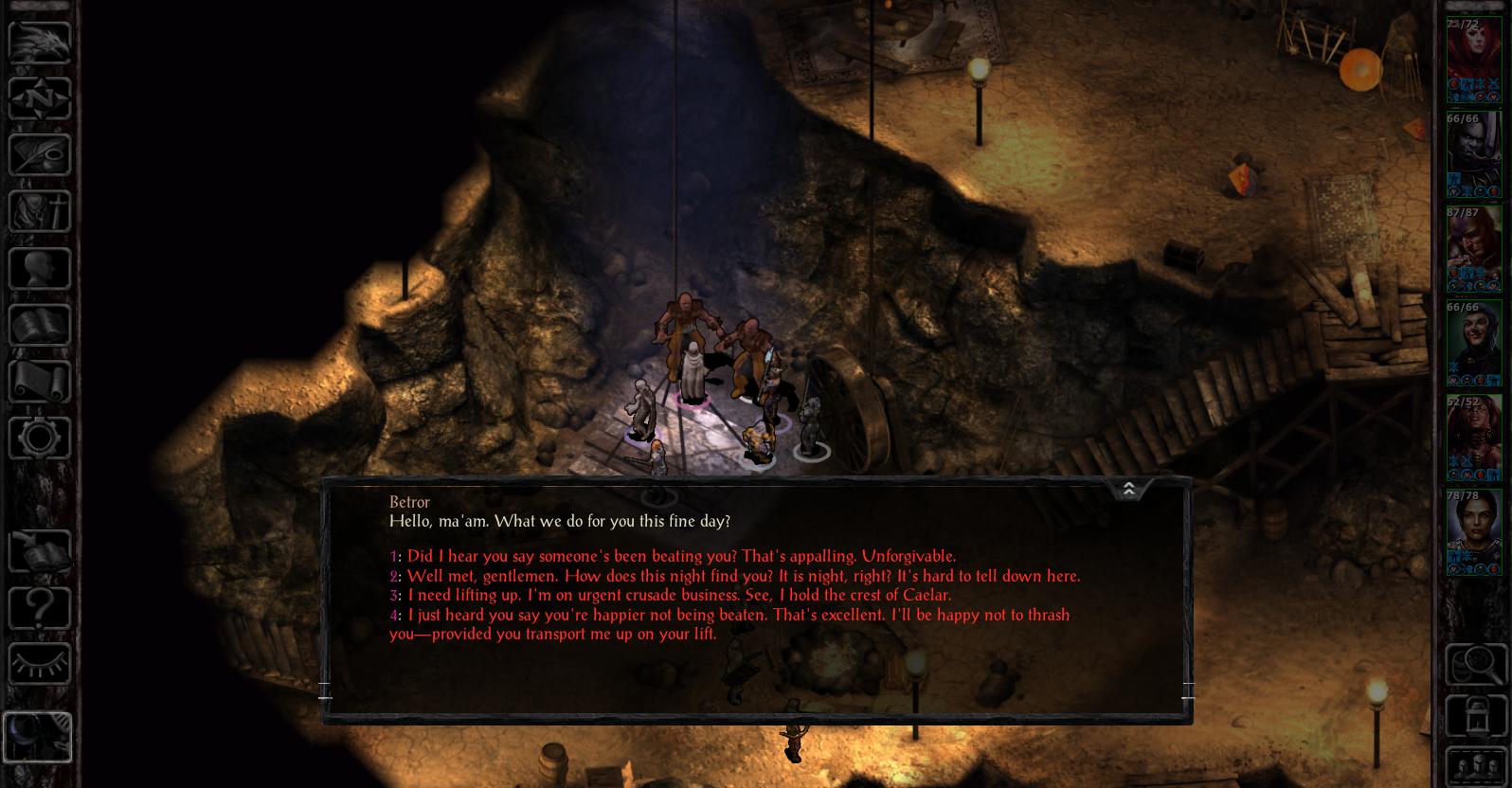 Above: A cultured ogre?

Let’s talk it out

Another nice touch is how your first encounters with the Shining Lady don’t need to end in fights. Too many RPGs throw you into combat without giving you an option to find an alternative, and I enjoyed having a chance to learn more about what’s going on around Dragonspear without needing to pull out my sword or throw a fireball at my foes.

Other encounters let you talk to monsters you’d normally slay in earlier games. You can help a captive ogre, one who has good reasons to distrust “the small folk.” Another duo of ogres feel more like a comedy routine than a pair of guards committed to the crusade. Giving more monsters personalities makes the world not only feel more alive but also feel more like a D&D game — some of my best moments playing the tabletop game over the years come from when my players put down their weapons and talked.

BioWare is the original maker of Baldur’s Gate, and while it was a pioneer in giving weight to women characters in role-playing games, Viconia DeVir and the others sometimes feel more like romantic missions than people with real stories and real struggles.

This changes in Siege of Dragonspear. My favorite new character is Schael Corwin, an officer in the Flaming Fist mercenary company. She’s an archer, a variation of the ranger class, and she’s a single mother. Her husband is out of the picture, and while her father helps out, she’s torn between her job as a merc, helping you, and caring for her daughter. 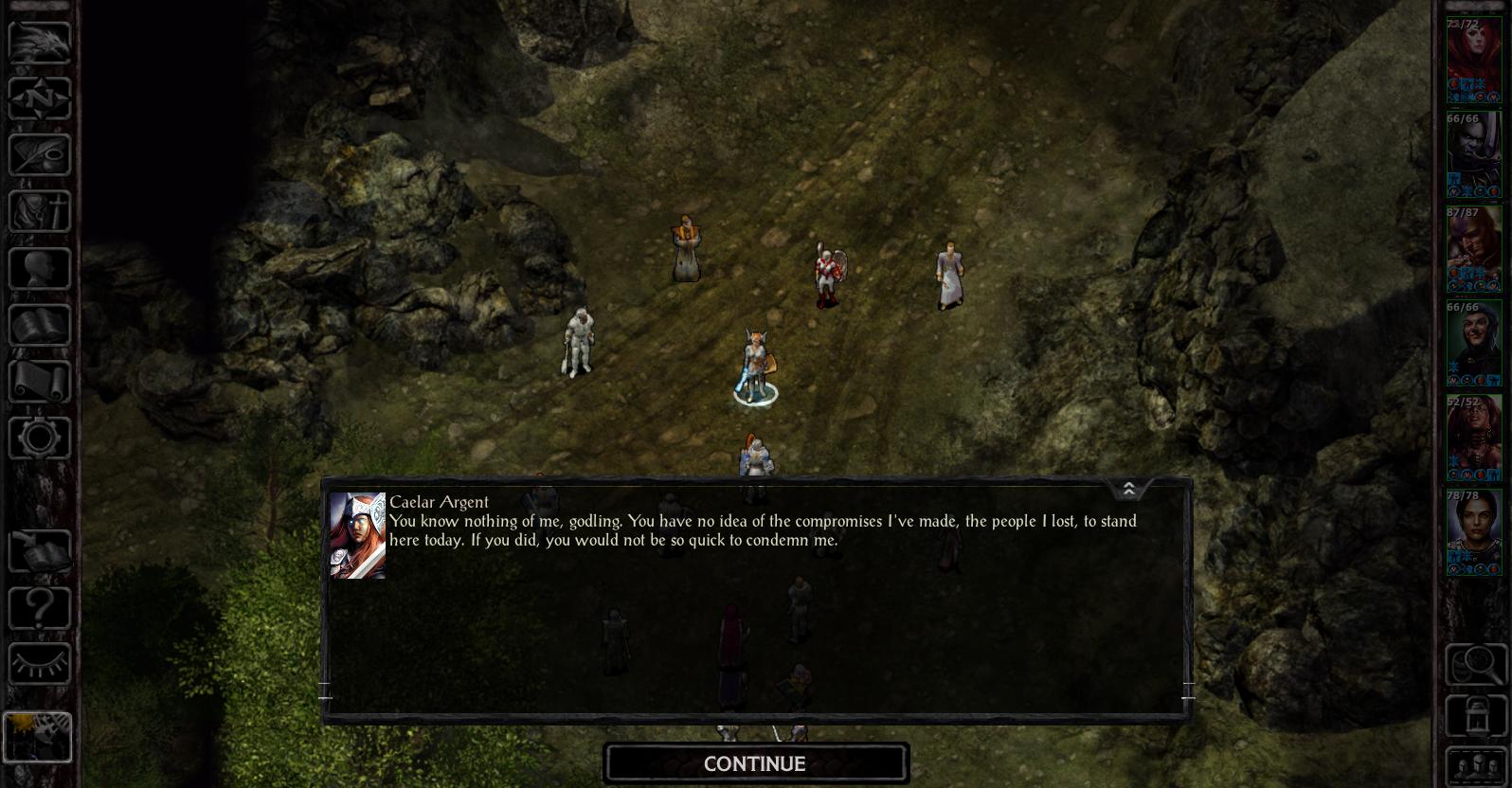 Above: The Shining Lady is your enemy — and another of Beamdog’s strong women characters.

I’ve never encountered such a storyline in a fantasy RPG before, and I feel for it. I felt for Corwin, and while I wanted to explore her story (since she is, after all, a new character), another part of me wanted to tell her to take a large cache of gold from my stockpile and be the mother she wants to be to her daughter. And should you go down the romantic path with her (as my female sorcerer did), you’ll witness her inner conflict between mother and warrior even more.

M’Khiin is another woman unlike any other in the series … because she’s a goblin. You rescue this Shaman from Baeloth, a drow elf sorcerer added to Baldur’s Gate: Enhanced Edition. He’s got a rinky-dink pit-fighting operation, one that’s quite laughable, and you show up and can free M’Khiin. It’s fun to play from a goblin’s perspective, and you end up finding some cool equipment that’s just for her shaman class, a new spin on druid.

Overall, the women you meet in other encounters feel more like characters that just bystanders. Beamdog spent time working on this, and you can see it. This makes the Sword Coast feel more real.

Above: Another change Beamdog has made to the Infinity Engine: It can show many more people now at once.

Beamdog impressed me with how it was able to make the old Infinity Engine easier to use. When you’re equipping items, you get a better comparison of how a weapon or piece of armor improves your stats. You can search your journal, and new entries appear on the screen as a clickable window after they’re added. You can search the journal as well, which was helpful for when I wanted to find some tidbits.

One of the coolest additions is how you can now see just the walkable area on a map. This helps you find the little hidden nooks without needing to click on every tree or rock formation to see if you can walk on it.

In the PC beta version that I reviewed, I kept finding small bugs. Some were annoying, like one where buttons for containers appeared over each other. You have to click on the bottom box, where you can’t see the text, for some actions. Another bug involved my Bag of Holding. These are handy because you can carry far more items in them than your inventory provides for, but with stacked missiles (like arrows), it would sometimes let me take out 40 or 80 at a time — and others, just one at a time. When you need 80 Arrows of Fire, but you can’t take out 80 at once, it’s annoying.

One bug broke my experience. After a pivotal moment in the final third of the story, it switched me from core rules (the “normal” difficulty) to story mode, which allows you to experience the take without the pesky challenges of combat or staying alive. It removes all tactical consideration from combat, and it’s stinks for an experienced player. And no matter what I did, Siege of Dragonspear wouldn’t allow me to switch out of this mode. 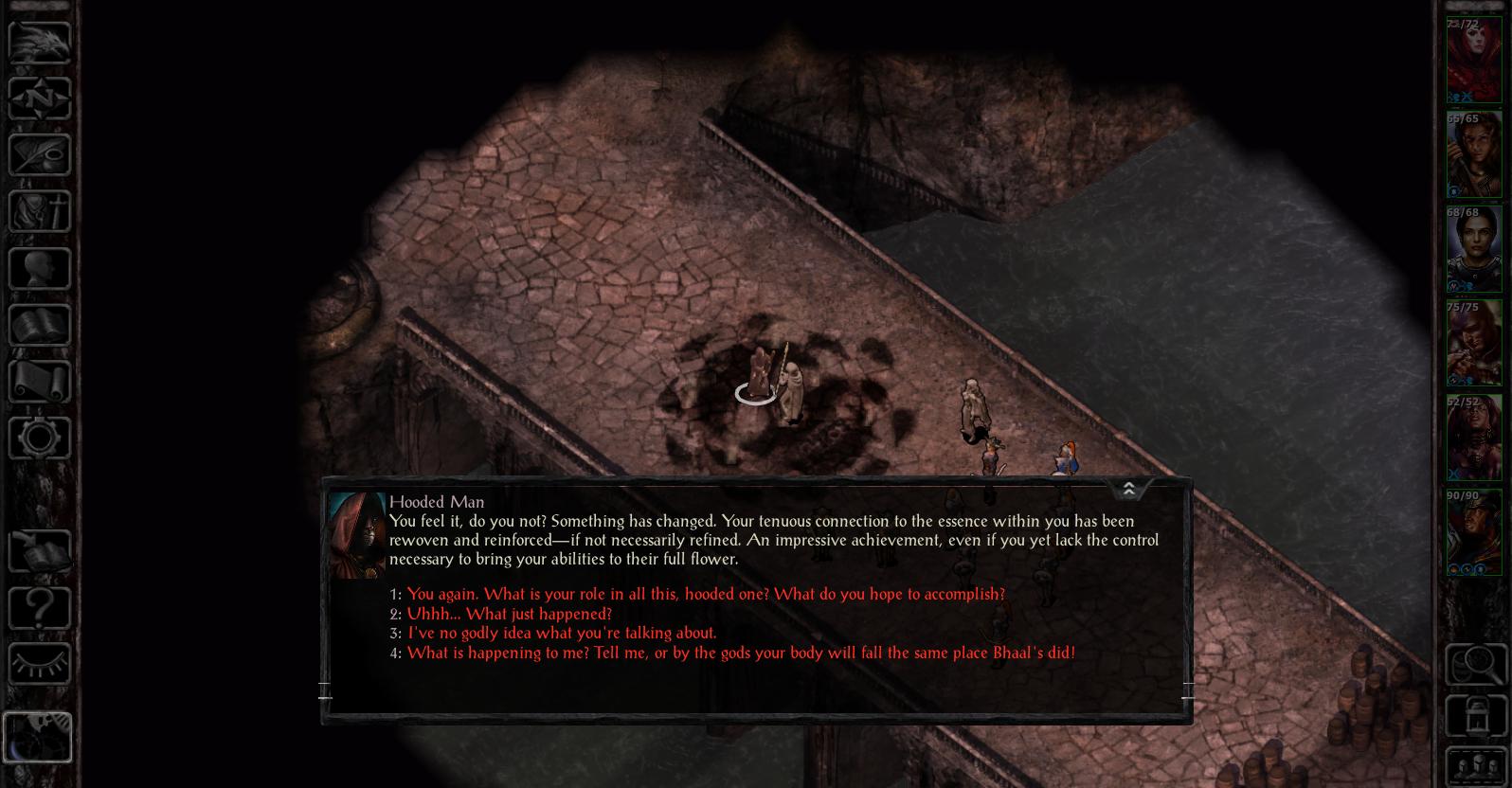 Above: The Hooded Man isn’t such a mystery.

Your characters still have trouble finding the best path to their destinations on some maps. If you’ve played the Infinity Engine games before, you know that Beamdog’s Enhanced Editions made this better. But it’s still a problem, and at this point, it’s one that we just have to live with thanks to this old tech.

On some region maps, the same groups of monsters kept coming back at the same exact places. This is silly. Once you’ve cleared out a group of Worgs hiding behind a rock formation in a forest, the exact same number of these wolf-like beasts shouldn’t return just because you’ve camped once or twice or have returned later from an excursion to another region. You end up spending too much time, healing, and ammo on these encounters early on. 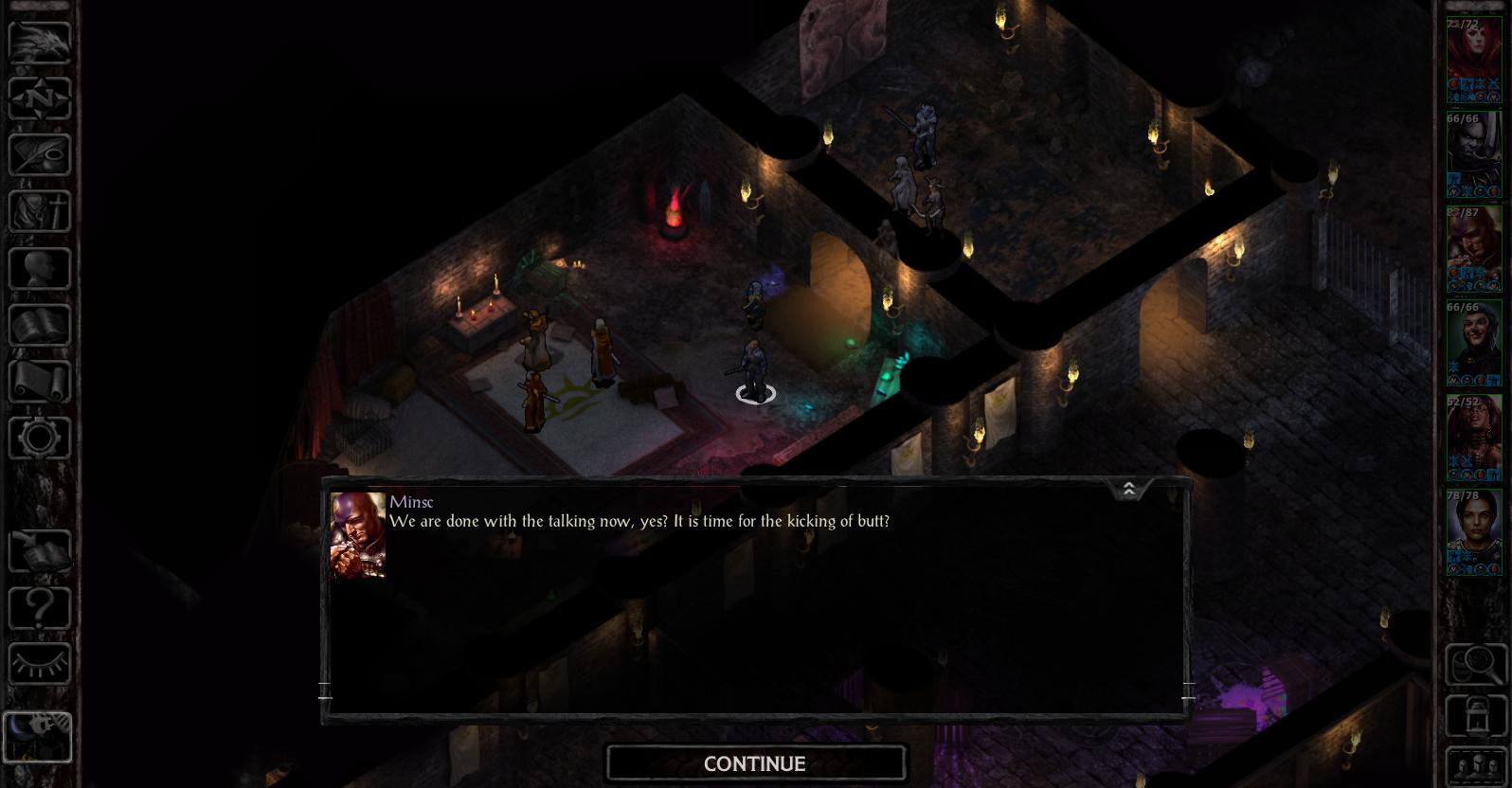 Baldur’s Gate: Siege of Dragonspear fills in some of what happens to the Child of Bhaal between saving Baldur’s Gate and saving your soul from Irenicus, and it’s a hoot to revisit this world, using the old D&D rules from the 1990s.

But Siege of Dragonspear hints at more — a studio that’s done with just enhancing older games and ready to carve out a place among the top storytellers in the RPG sector. Beamdog’s first effort at original storytelling is a good start, and I’m excited to see more in the future, even if it’s in the world of Baldur’s Gate.

Besides, I’m always ready for more Minsc and Boo. No one can resist the miniature giant space hamster of goodness.

Baldur’s Gate: Siege of Dragonspear is out now for PC, Mac, and Linux. The developer provided GamesBeat with a digital review code — but not the final product — for the purposes of this review.