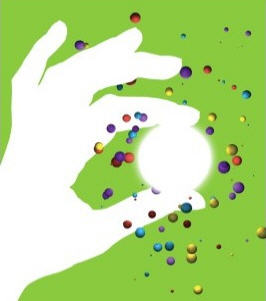 Ball-it, a Finnish company that makes a little ball that remotely interacts with your computer, phone or TV screen, wants to challenge the Nintendo Wii and become the latest, coolest way to interact with games.

A host of other companies are trying to do the same thing — however none of them have gotten much traction. Like some of those competitors, Ball-it wants to become the non-keyboard standard for remote communication with your screen.

Ball-it’s idea has a simple elegance, and while I’m not sure whether it’s ready to hit big time in its current form, it may point the way to the future. The golfball-sized device is filled with wireless sensors, and these sensors communicate with your mobile phone or computer screen with Bluetooth technology.

Here’s the promising part: It allows you to rotate the ball along any mixture of the three axes, so that it can communicate with your computer or mobile phone screen while stationary. Additionally, you can move the ball up or down, left or right, or close to or away from the screen (see the graphic below). So when it’s used as a game controller, each one of these movements let the ball interact with a game in a different way — depending on how the game software developer chooses to interpret these movements in the game.

[One drawback is that the company, based in Oulu, Finland, is being excessively secretive right now, and it won’t release any videos that show how it works. I had a demo of it while attending the Slush event in Helsinki last week.]

Additionally, you can even squeeze the ball — effectively making it as effective as a joy stick — letting you do things like shoot guns, hit a tennis ball, or zoom in and out on maps (depending on the game or application, the squeeze function can be interpreted in different ways). The ball senses geomagnetic field, orientation, direction, speed, air pressure and acceleration — letting it do a bunch of things I haven’t seen its competitors able to do. 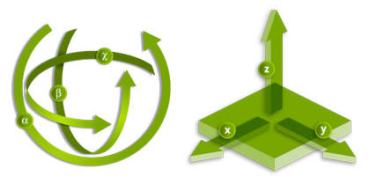 If all this sounds a tad confusing, that’s because it is. I had a difficult time getting the squeeze and the wrist-flick down smoothly enough to feel comfortable in these games, but I didn’t work at it very long. The intuitiveness will also be improved as more games are developed to interpret the ball movements in more subtle and efficient ways.  Indeed, the company’s chief executive Juha Rytky says the Ball-it is like an iPod without an iTunes platform. It needs more games to be built to accommodate, and that’s why the company is staying secretive for now — it doesn’t want to build publicity when the market isn’t ready for it.

Rytky says he hopes to announce two deals with distributors next year, one in Italy and the other in Germany.

But the company sees the ball being used in other ways too. It can work with any networked device, so it can become your virtual wallet with all the information and passwords you need, if it is configured correctly. It become your virtual car key, for example. It can be sued as a pedometer and fitness logger, a mouse, compass, measuring tape, or any 3D object controller. Other applications can be built using the company’s software development kit.

Rytky hopes that the ball’s promise will be attractive enough for mobile phone carriers to decide to subsidize the cost, buying it in quantity from the company but giving it to consumers almost for free.

Again, I’m not sure this will take off in its current form. The starting assumption for Ball-it and its ilk is that keyboards are frustratingly limited. If you’re following the debate about the latest keyboard technology, you’ll note that there are lots of unhappy users — even among users of the Apple’s iPhone, with its touch screen technology, and certainly among the testers of the Blackberry’s latest device, the Storm. The keyboard traps you in a two-dimensional plane, and you can only input directions as fast as your fingers (or thumbs, with mobile phones) will type.

So for most forms of non-character communication, you want to get away from pressing buttons on a keyboard, touch-screen or otherwise.

A number of companies have tried various approaches to remot sensor controls. Few have gotten any traction. Most of them want to be game controller Wii-killers, and they range widely in technology, from gyroscopes to infrared. There’s SoftKinetic, which keeps saying its getting real close, and there’s variations Xtr3D, Oblong, GestureTek, Prime Sense and ZCam (with its 3DV product). But it’s really only been Nintendo, with its massive existing distribution clout, that has won adoption, even as these others have struggled. Meanwhile, Motus, a U.S. company, wants its Darwin controller to be the take the Wii experience to the PC. Its technology resembles that of Ball-it, boasting the same six degrees of movement.

Ball-it’s dexterity is worth noting. I’m pretty sure something like it will emerge and become a big hit. Right now, though, in its current form, it’s too unintuitive. It can do so much, and is nifty in that way, but it’s almost as though it doesn’t do any one thing extremely well — it fails to demonstrate a “killer application,” and after all, who really wants to carry around a ball to communicate with their phone or TV?

Ball-it has raised $1.5 million so far, mainly from Auro Capital, a Finnish venture capital firm. It hopes to raise $3 million to $4 million next year.

The ball would cost about $20, but the company hopes to make money from licensing fees it would get for software to interact with the ball.