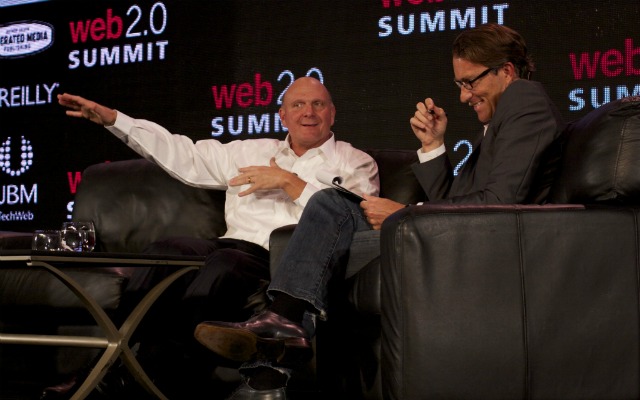 Speaking at the Web 2.o Summit today Microsoft CEO Steve Ballmer said that the Kinect, the motion-sensitive camera for the Xbox 360 game console, is going to be at heart of rush of innovation.

“You’re going to see a range of important innovation that will be coming to Kinect on the XBox this holiday season,” said Ballmer. Today Microsoft announced a partnership with Sesame Street to use the Kinect to engage young television viewers, and the innovation and community involvement is going to continue apace.

The Kinect is going to be an increasingly open platform for developers to highlight the motion control functionality. Within days of being released to the public, the Kinect was hacked, and Microsoft has embraced the community interest. Ballmer said Microsoft would have opened up Kinect anyway, but it had to do so faster after the hack.

And when asked why someone should buy a Windows phone, versus an Apple or an Android, he said that Microsoft devices are just as beautiful as the competitors before taking a shot at rival smartphone platform Android, saying that you don’t need to be a computer scientist to use Windows Phone, but it seems like you do need to be in order to use Android.

Next year, Microsoft will launch its Windows 8 operating system. That will include a Metro interface, a touchscreen interface with large tiles that you can touch. You can interact with those titles by swiping on a  touchscreen. The Metro interface will run across PCs, tablets, smartphones and the Xbox Live online gaming service.