Dax Ginn is one loud sonofabitch. This producer at developer Rocksteady screamed, cheered, and jumped up and down as he helped demo the final chapter in his studio’s Batman: Arkham Asylum/City/Knight trilogy. His raw enthusiasm was refreshing and incredibly entertaining to witness — other press events are now boring by comparison.

Ginn has a huge personality. This is fitting because Batman: Arkham Knight — coming to PlayStation 4, Xbox One, and PC this October — is a huge game. Thanks to the power of new-generation consoles, Rocksteady can finally realize Batman’s playground to its fullest. Instead of a few locales or neighborhoods, Arkham Knight will feature a “full-sized” Gotham — a true open-world city not unlike those you’ve seen in games like Grand Theft Auto (only much darker and moodier, of course).

Batman will get enhanced maneuvers to help him grapple-hook and glide across his plus-sized metropolis more quickly. The Batmobile is also making its first appearance in the series, since Gotham City now has enough roadway to make the iconic roadster a viable means of transportation.

After Ginn settled down from his high-energy presentation, we cornered him to get a few of his thoughts on creating a bigger Gotham and why a Batmobile is even needed when the caped crusader can already zip around town so easily on his own.

GamesBeat: Obviously, there’s more artwork and more real estate to program, but what are some of the other, less-obvious challenges in creating a big, open-world city like this?

Dax Ginn: Making it feel authentic. It would be very easy to build out the entirety of Gotham City and have it just feel like another city. To make it feel like Gotham City, you have to get the atmosphere spot-on. That comes down to lighting, it comes down to atmospherics, sound, the use of architecture.

GamesBeat: You have several challenges: making this feel like Gotham City, appeasing the fans, appeasing DC Comics, making the city work with the Batmobile. Can you give any specific examples of design challenges there?

Ginn: There are certain things I feel like we have to do, like the Gotham Clock Tower. It’s a legendary location. But it’s only going to be super meaningful to a handful of people. But it’s really meaningful to those people. We have to make sure we get that right.

All of the little connections in Batman lore — we’re idiots like that. A lot of thought and energy has gone into the layout of the streets, because Gotham City isn’t a grid-based city. It’s much more like an organic layout, with curving streets and different heights. Balancing that, the design of the urban environment, with the handling of the Batmobile, like I said, those two things had to go hand in hand. 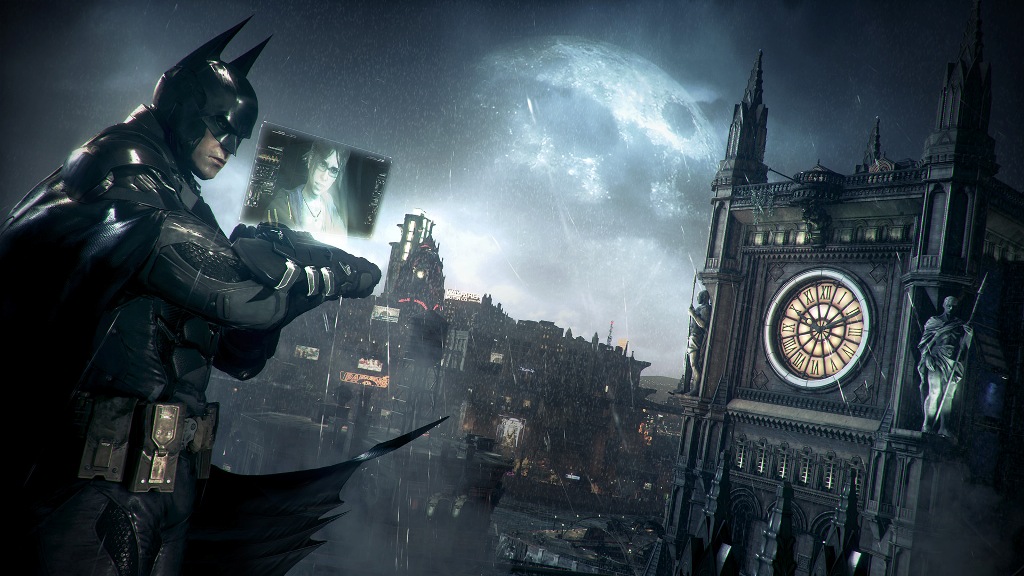 There’s a combination of working with DC on, what does the Clock Tower look like? What does the [secret-button-hiding] Shakespeare head look like? What are these pieces of Batman lore that we’re putting into the city, in terms of legendary locations, but then, from a gameplay perspective, how do we make this the most incredible experience that people have had in this legendary city? It’s a real juggling act.

GamesBeat: Can you give an example of something in the game world that had to change a lot compared to its comic equivalent?

Ginn: I think the sheer destruction on display in the game. I can’t think of any other illustrations of Gotham City where there’s this sort of wrecking-ball style of influence that is the Batmobile. There’s a lot of technology that goes into that, thinking about how to lay out the city in a way such that there’s the maximum enjoyment gamers can get out of moving through the city in a way that makes sense.

GamesBeat: At the beginning of the demo, you said that this full-sized Gotham City is now possible with next-generation systems. Why couldn’t a city of this scale have been done before? We’ve seen big open-world games in previous generations of consoles. Was this perhaps part of a long-term strategy for the trilogy? Space out the growth of the world, to give gamers more over time?

Ginn: Partly because as a team, we’re still quite young. We want to make sure we’re putting our energy in places that are going to be really significant for the gameplay experience.

But the big reason why we couldn’t have done this in previous generations is because of our obsession with graphical quality. Arkham Asylum was a very highly detailed game. That atmosphere was very specific. We wanted to maintain that same level of detail as we moved into an open world for Arkham City, and then it was the same thing again. We wanted to make sure that Gotham City felt believable, whether you’re driving at 100 miles an hour or you’re walking at one mile an hour. The player has got complete freedom to decide the speed at which they move in the world. If we compromise on graphical fidelity and detail, it’s not going to look very good when you’re walking through the streets, in that kind of slow walk of justice that [Batman does]. We needed to make sure that level of quality was there constantly. Scale and detail don’t usually go together, but on next-gen we can deliver both of those at the same time.

GamesBeat: Why would a player drive through Gotham City when you can essentially fly through and glide over buildings at a faster speed? Obviously you have missions designed with the Batmobile in mind, but that aside, it’s a normal means of transportation for getting from point A to point B. What are you doing from a design perspective to make that a desired form of transportation?

You’re right. We can cross the city in any way that we want. We can navigate from point A to point B in any way that we want. But knowing that there’s that synergistic connection between man and machine — you can start gliding, then change your mind and just call [the Batmobile and drop right into it without stopping], or you can start driving and eject out and go straight into gliding. It just feels awesome. So maybe that’s the reason. It just feels totally awesome to be able to do it that way.

GamesBeat: Will you guys be doing any other common tricks with open-city games, like short cuts? Now that the city’s bigger, after a while, maybe I don’t want to drive or glide so much. Just take me straight there.

Ginn: A fast-travel system? The Batmobile is fast enough. It’ll get you there. [laughs]

Click on the gallery below to view more images.