On paper, Battle Chef Brigade sounds like a wild fusion of genres. It’s an action-brawler with match-3 puzzles set in the fantasy land of Victusia, where the people turn to a troop of battle-ready chefs for protection. The concept could have easily soured, but developer Trinket Studios masterfully blends all those elements into a dish that serves plenty of entertainment and charm.

Trinket successfully raised funds with its Kickstarter campaign in 2014, and it partnered with publisher Adult Swim Games to release Battle Chef Brigade on the Nintendo Switch and PC. I played it on the Switch and found that going handheld was a great way to enjoy these bite-sized battles. 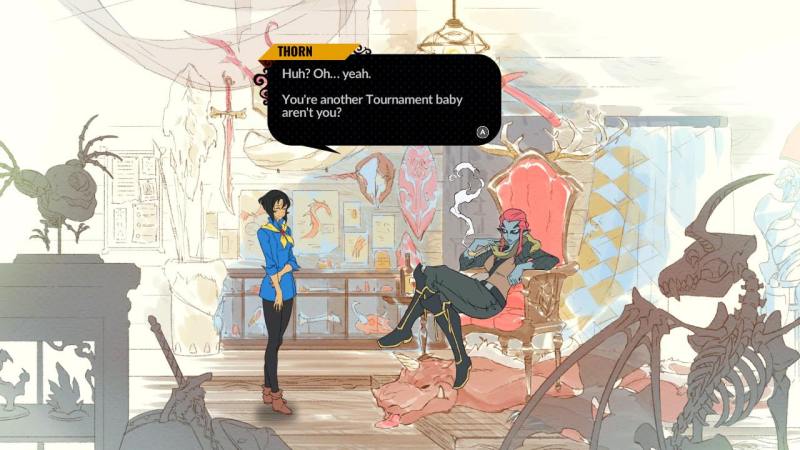 Above: Thorn, the lovelorn hunter, helps you practice combat (and earn some coin).

A good deal of Battle Chef Brigade’s charm comes from its handcrafted visuals. It draws inspiration from Japanese anime, and it captures that style with brilliance. The artwork and even the protagonist wouldn’t have been out of place in a Studio Ghibli film. You play for most of the game as Mina, a bright-eyed aspiring chef from Windy Village who reminded me of the optimistic and determined heroines of Ghibli movies like Kiki’s Delivery Service.

The game feels very cozy, from the characters’ designs to the environments themselves — whether you’re wandering around Brigade Town and browsing the wares at the local shop or even tussling with monsters on floating islands in the sky. Little details like cats lazing about in the sun and cabinets full of mysterious trophies in the hunter’s lodge add a level of depth. Even though you don’t get a chance to explore that much of Victusia, it feels like a place where people would live.

While the characters and world have a soft watercolor look to them, occasional splashes of bright neon punctuate the game. The interstitial screens showing your score after a match feature bold, pop art-inspired geometric shapes, and when you get hit during combat, your character is highlighted with a striking shade of yellow. All of the art is also boosted by some really solid voice acting. The characters have clear personalities, such as Mina’s bubbly cheer or Kirin’s mild-mannered calm.

A highlight is Chairman Kamin, an obvious spoof on the Chairman from Iron Chef America. Everything from his mannerisms to the way he delivers the ingredient of the day is spot-on, and it’s a terrific tongue-in-cheek homage to a show that’s clearly influenced the game. 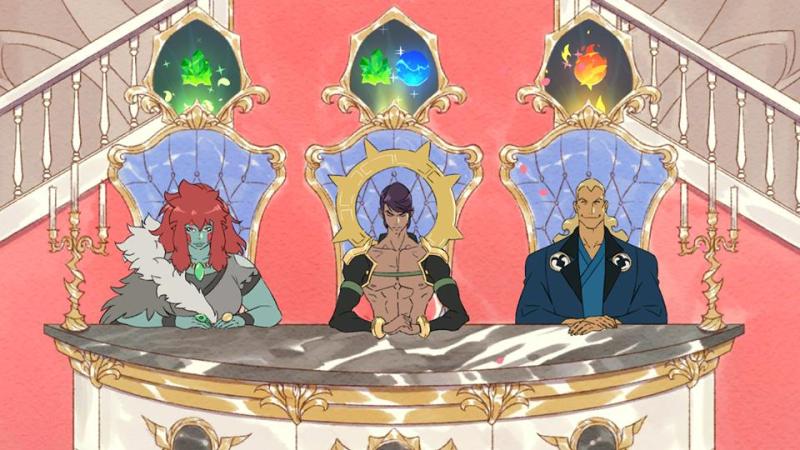 Above: The judges, who are all picky eaters.

As an aspiring Brigadier, Mina competes in a tournament that pits her against other hopeful chefs. Once you issue a challenge, a showdown in Kitchen Colosseum presents you with the ingredient of the day and the judges, each of whom has a specific request. One might ask for a dish with hints of both earth and water, and another might ask for a dish that’s entirely fire. Depending on how many judges you have to satisfy — it could be up to three — you get a set amount of time on the countdown clock.

Within the allotted time, you have to run out and slay monsters, gather ingredients, and head back to the kitchen to cook up your entrée. Mina’s armed with throwing daggers and the ability to create a whirlwind. You also spend part of the game as Thrash, a fellow competitor and friend. As an orc, he has the ability to enter a berserker mode with powerful melee attacks.

The combat itself isn’t anything too special — you’re jumping around, slashing critters, and gathering up their parts. But you have to balance it with time at the stove, which is where it gets interesting. When you’re cooking up ingredients, you solve match-3 puzzles and get the appropriate color combinations to satisfy each judge’s cravings. It’s fun splitting your time between these two different elements while also keeping an eye on the clock.

Once you’re finished with the story campaign, a daily leaderboard features different ingredients. You can play as Mina or Thrash and attempt to beat other people’s high scores. Because each match is fairly short — about 10 minutes if you’re cooking for three judges — it’s a fun little diversion that doesn’t take too much time each day. 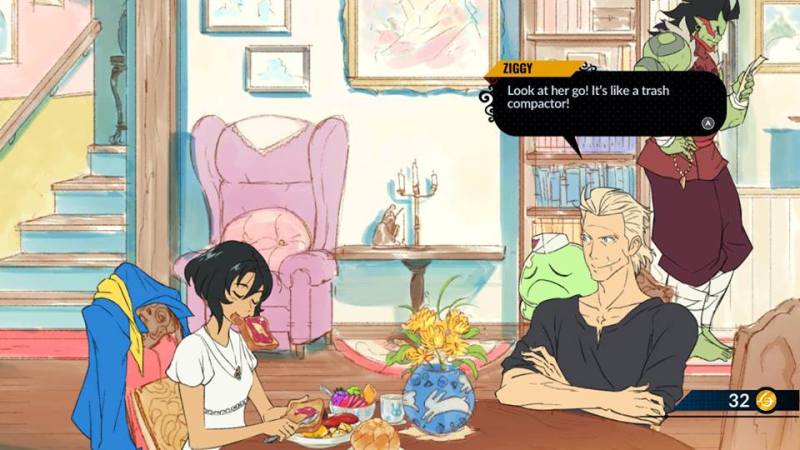 Above: Mina refueling before another day in Kitchen Colosseum.

Battle Chef Brigade is a beautiful game. I only wish that there was more to explore. About halfway through, you’ll have basically seen all the different environments. You’re either leaping upward through the sky, stabbing your way through a forest, or exploring caves. Ditto goes for the creatures and ingredients as you’ll soon become familiar with them all.

While you can arm yourself with different combat items or various types of pots and pans that aid you in the match-3 section of the game — a slow cooker, for instance, gradually upgrades the ingredients inside — your opponents aren’t really that different from one another. They don’t have any wildly different cooking styles. Some of them are harder than others, but ultimately, all the battles feel like they’re the same.

The story lasts about six chapters, and I found myself wanting more. I would have loved to see more areas or different types of competitors or have more time with Thrash. We spend one chapter with him, and the rest of the campaign follows Mina’s journey. That moment felt too brief and also a little out of place. After buying him some new items and learning his combat moves, you just end up switching back to Mina for the rest of the campaign.

Battle Chef Brigade is a delightful snack-sized game that combines its disparate elements in a whimsical, entertaining way. I loved the style and the occasional clever puns. The kitchen battles were a lot of fun, especially because they were timed, and used match-3 mechanics in an innovative way. If you’re a fan of Iron Chef, Studio Ghibli, or both, you’ll likely enjoy this foray into the world of Victusia.

Battle Chef Brigade is out on November 20 for the Nintendo Switch and PC. The publisher sent us a code for review.