Battlefield 1 is an epic game that takes players into the fresh territory of World War I, which was touted as the “war to end all wars.” In the end, after 17 million civilian and military deaths, “it ended nothing,” as the game says in its beginning.

It is a solemn beginning for one of the biggest games from Electronic Arts and its DICE studio since the Battlefield franchise debuted in 2002. The developers took the risk of leaving the familiar modern war environment for the novelty of World War I. It spans many different environments, such as Saudi Arabia and the French Alps. And while it takes liberties with the historical facts in the name of fun, it is respectful of those who sacrificed all. The game debuts on October 21 on the Xbox One (which I’m playing on), PlayStation 4, and the Windows PC.

Battlefield 1 is fiction. But it unflinchingly captures the horrors of war, including fighting hand-to-hand in the trenches and pitched tank battles. And it also personalizes The Great War, as it was called, so that you understand the bravery of individual soldiers. Indeed, the first thing you notice in the prologue is that when your character is killed, (starting with the characters of the Harlem Hellfighters of the all-black U.S. 369th Infantry Regiment), you die. An epitaph then appears with the soldier’s full name, birth year, and year of death. Then, when you are revived, you start as another soldier. That’s quite a stark reminder that in war, you don’t get a second chance at life. Overall, I thought the whole game was very well done, balancing history, fun, and personalized stories set within epic battles.

I’m going to write a full review of the single-player campaign, which is really a prologue followed by five separate campaigns. I just finished the whole single-player game tonight on the Xbox One. But for now, I’ll write about my impressions of the first mini-campaign, Through Mud and Blood, which depicts the British tanks as they were used in The Second Battle of Cambrai in October 1918. During that battle, 324 British Mark V tanks punched through the German lines near Cambrai, France. This mini-campaign has four battles in it, and it takes a couple of hours to play. 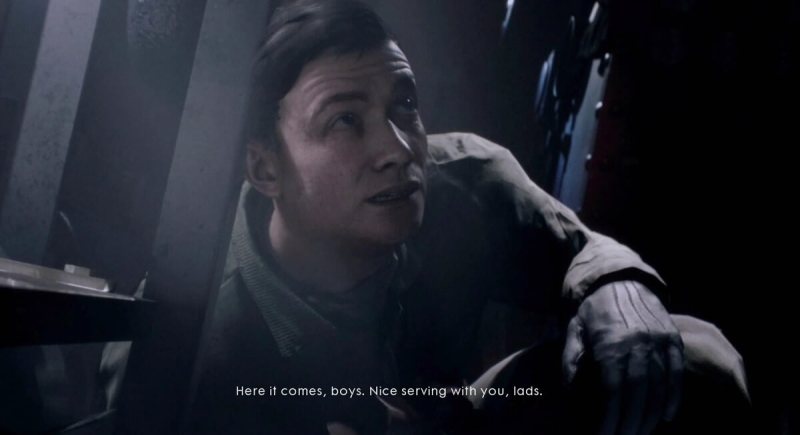 Above: Danny Edwards in Battlefield 1’s Through Mud and Blood story.

The weapons, tanks, and environments of the Cambrai campaign are accurate, but the events are fictional. Once the British punched through the German lines with tanks, they consolidated their victory. But the Germans did not fight back with their own tanks, and a lone British tank did not venture far behind enemy lines and have a pitched battle with a couple of platoons of German tanks, as happens in the game.

You play as a tank engineer, Danny Edwards, who joins a tank commanded by Townsend in a chapter called Over the Top. At the outset, Black Bess, the British tank, crosses the trenches with the other tanks and falls upon the German soldiers. The tank’s machine gun is quite devastating, as one shot takes out any stray German soldier. The tank gun is powerful, but takes time to reload. I used it to blast away at artillery positions, German armored vehicles, and collections of soldiers. The beginning mission, where the tanks run over the German trenches and beyond, is a fairly easy battle that shows off the environmental destruction that is possible with the Frostbite engine. The tanks can crush stone walls and knock over barbed wired with ease. The explosions are huge and quite terrifying.

In the second chapter of the campaign, Fog of War, the tank proceeds into the German controlled rear area. Black Bess is all by herself, moving forward on a road through a foggy forest. The fog itself is impressive, and haunting. It took me a while to figure out how to repair the tank, but once I did, I saw how that could be a lot of fun. Your tank has to sit still while you repair it, and when you are done, Black Bess is as good as new. It’s not realistic, but it keeps your tank in the fight for much longer. Black Bess gets surrounded at one point. And then the silliest part of action occurs. Townsend gets Edwards to release a pigeon with the tank’s coordinates. The bird flies back to the artillery unit, which fires on the exact position. The German infantry are wiped out, but Black Bess survives. Now that’s something that could happen in the Vietnam War, using radios. But pigeons in World War I calling in precision artillery strikes? That’s pure fantasy. 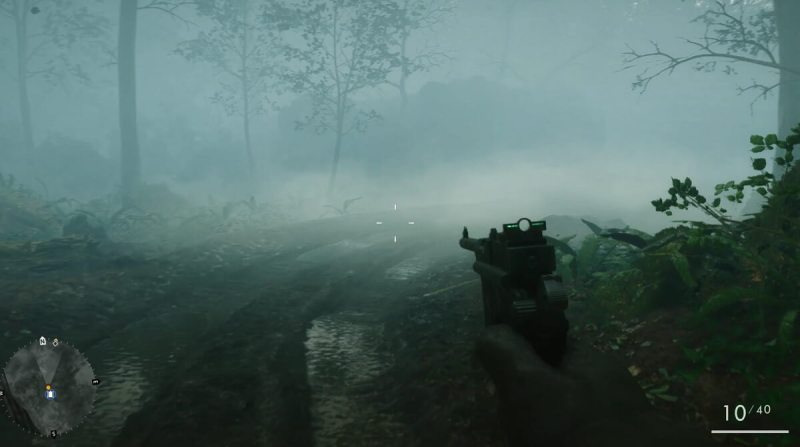 Above: The spooky fog of the Bourlon Forest in Battlefield 1.

Indeed, it feels like the invincibility of Black Bess negates the lesson of the prologue, where soldiers don’t get to live again. By this time, as you go through the scary fog of the forest, known as the Bourlon Wood, you know you’re in the middle of a video game. Its purpose is to convey to you the feeling of fear in war but not the historically accurate version of that war.

In the fog, Edwards has to go ahead into the German trenches and take out a whole platoon of soldiers while Black Bess follows behind on the road. It’s not an easy battle, and I died a few times. Then we got to a clearing dominated by a big German pillbox. There, the fog dissipated and Edwards and Black Bess had to take out a small group of German guards. Then, the Germans counterattacked with a tank. And that proved to be quite hard to destroy. I had to fight this part of the battle quite a few times before I could finish.  Once, I managed to get into a German single-soldier tank. But it got blown up, and another German tank arrived on the scene and took out Black Bess. When I finally finished the battle, Black Bess was in bad shape.

That took me to the third chapter, Breakdown, where I had to find spark plugs in a German-controlled village to repair Black Bess. Oh Lord, how I wished I could just order those spark plugs on Amazon. I wandered around the village a couple of times to find the spark plugs, and in the end, I didn’t care how many Germans I spooked and then shot. One of the difficult soldiers I faced was one with a flamethrower. I discovered quickly that I couldn’t knife him. I also couldn’t shoot him, as bullets seemed to bounce off his armor. The only spot that I could shoot him was his gas tank, which exploded when hit. It was pretty scary running from all of the guards and the flamethrower guy in the middle of the night in the stony village. But it was quite satisfying once I delivered the spark plugs to Black Bess and then, during the daytime, we drove through the town and blew up a bunch of tanks and Germans. 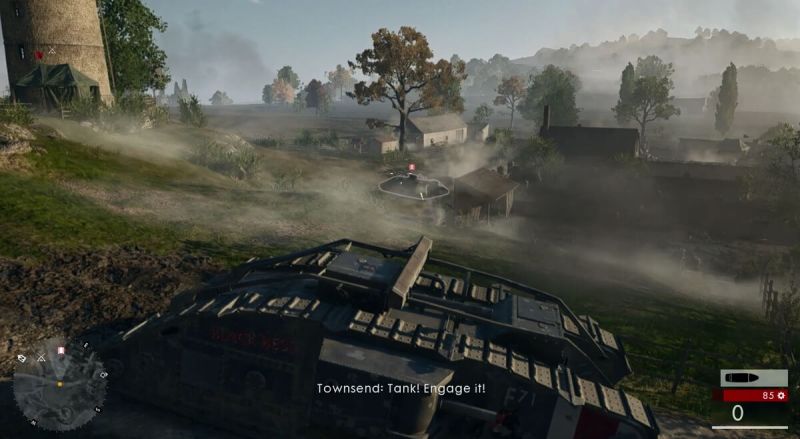 Above: Tank battle in Battlefield 1

The final battle of the Cambrai campaign, a chapter called Steel on Steel, is very intense. You have to take a town, wipe out all of the anti-tank artillery in it, and mop up the infantry. But then a variety of German tanks attack. I had to play cat-and-mouse, driving around the stone buildings and using them as cover while I repaired my tank. Then I would roll out, take a shot, and move back into cover. I eventually took out a bunch of tanks this way, and then more tanks came. It was absurd on the historical level, as Black Bess took out about 15 tanks altogether. But it was fun. And that’s what this game is about in the end.

No big celebration happened at the end, but the story did recognize the sacrifice of the soldiers. I felt the story was well written, and that was the mark of each different campaign in Battlefield 1. The grueling Battle of Cambrai was a fine way to start out this game, even though it happened just a month before the war ended.

Here’s a capture of some of the action of Through Mud and Blood, where the British tanks are punching through in Over The Top.