Electronic Arts and DICE revealed the gameplay for Battlefield 2042 in a demo at Microsoft’s Xbox E3 event.

While the game will be a cross-platform title across both the PC and Sony’s PlayStation consoles when it debuts on October 22, the revelation at Microsoft was a small victory for Xbox at the ultra-competitive E3.

The game is a modern online multiplayer shooter game coming October 22 for the PC, PlayStation, and Xbox (both the newer and older consoles). The game will feature as many as 128 players on the battlefield at once — the largest number ever for the series — for the PC, PlayStation 5, and Xbox Series X/S, and it will have real-time events that can reshape the battlefield and tactical combat. Up to 64 players can play on the PlayStation 4 and Xbox One in multiplayer.

It will have new weapons, vehicles, and gadgets that give players the freedom to be strategic and create “only-in-Battlefield moments,” EA said. EA has confirmed the game will not have a single-player mode, but we know the multiplayer will have “narrative” elements and it seems like DICE will likely have its own take on battle royale.

Today, EA showed another trailer of pre-alpha game footage, confirming many of the things that it hinted at in the last reveal. It showed a tornado coming into a map full of skyscrapers, and the storm pulls in helicopters and everything else in its path.

You can also ride on wires between the buildings and get into all sorts of military vehicles. The battles were full of “Battlefield Moments” that EA has been touting.

The reveal of the game’s trailer last Wednesday was the biggest drop of information so far on the game, which will go up against a new Call of Duty game this fall. Battlefield’s typical advantage will be in its destructible environments, which will reach new levels with weather effects like tornadoes that can destroy the battlefield. That’s one thing DICE’s Frostbite engine gives Battlefield that Call of Duty can only do in a limited way, usually. 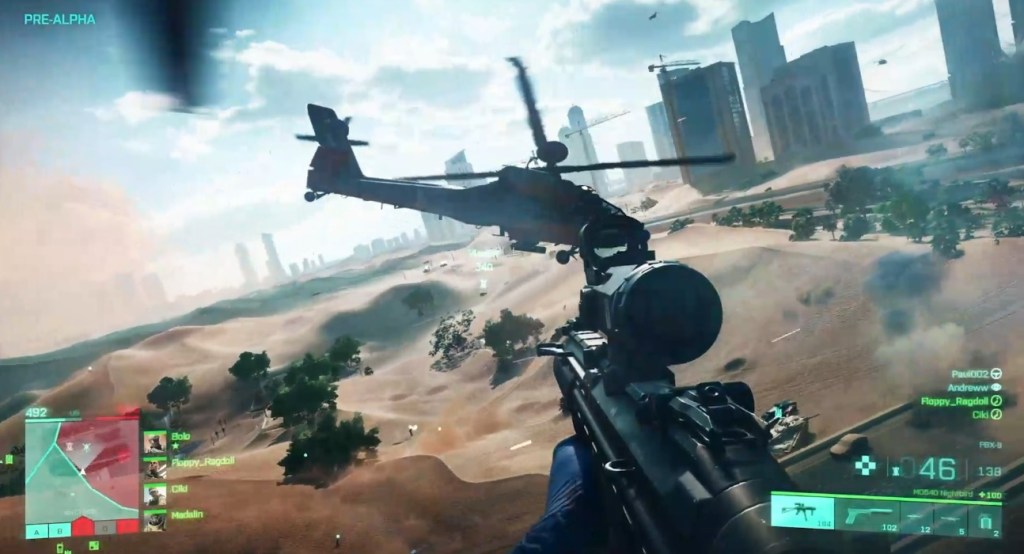 EA’s trailer form last week featured a tornado hitting the battlefield and pulling players up into the air and causing massive destruction. In one scene, a soldier hangs onto the side of a vehicle while trying to avoid being swept up by the wind. The trailer also features pretty amazing visuals with detailed lighting and shadows. It shows helicopters dueling in the skies among skyscrapers in a neon city at night. It has spectacular lighting, and one scene where jeep flies off the top of a building and hits a helicopter in midflight. Soldiers have wingsuits and can fire shoulder rockets at planes while in the sky. Specialists have customizable face masks. 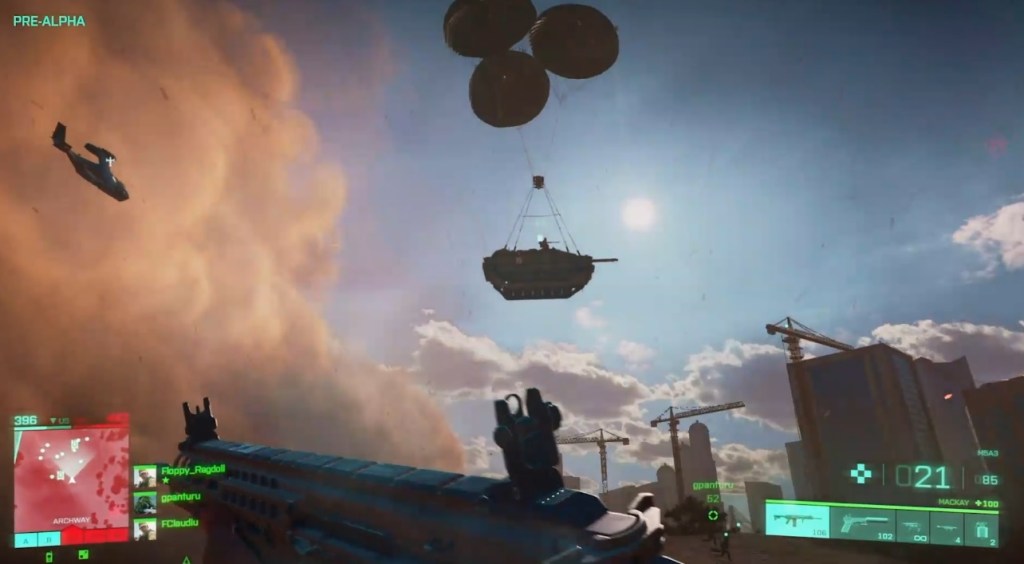 Above: A tank drops on the battlefield in Battlefield 2042. 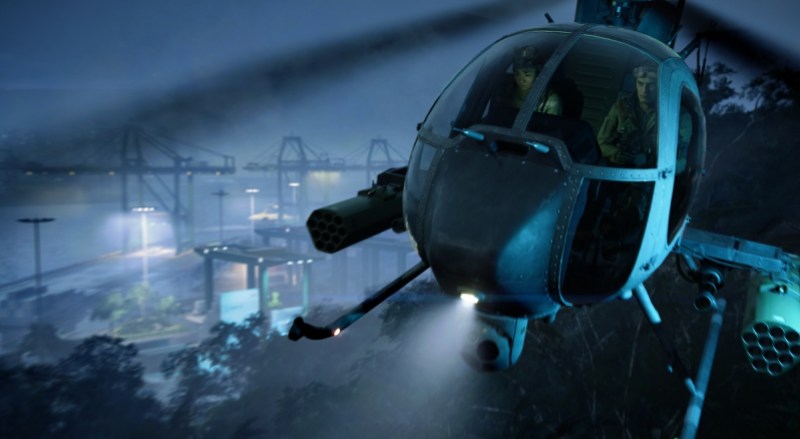 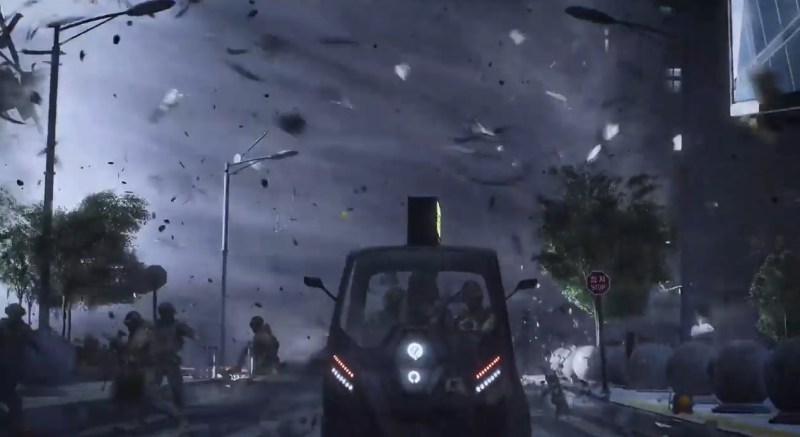 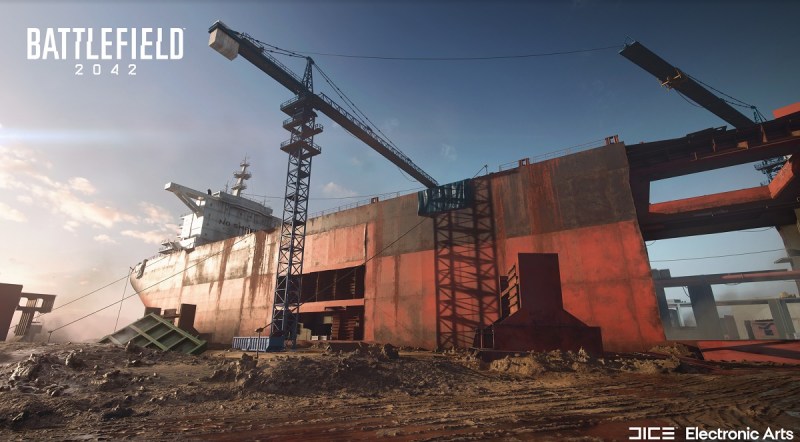 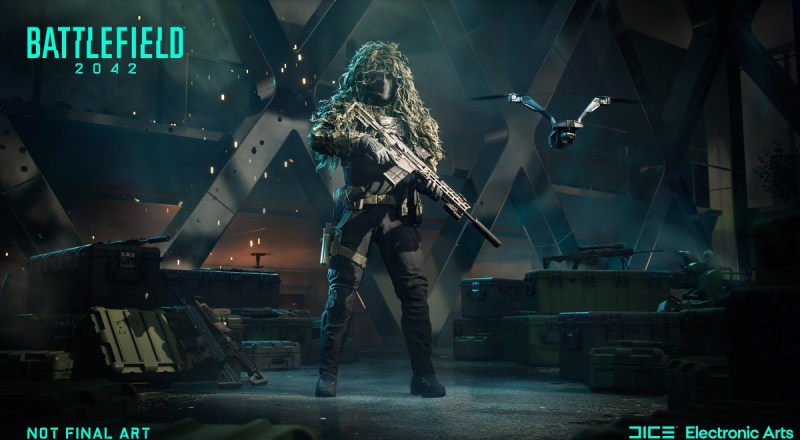 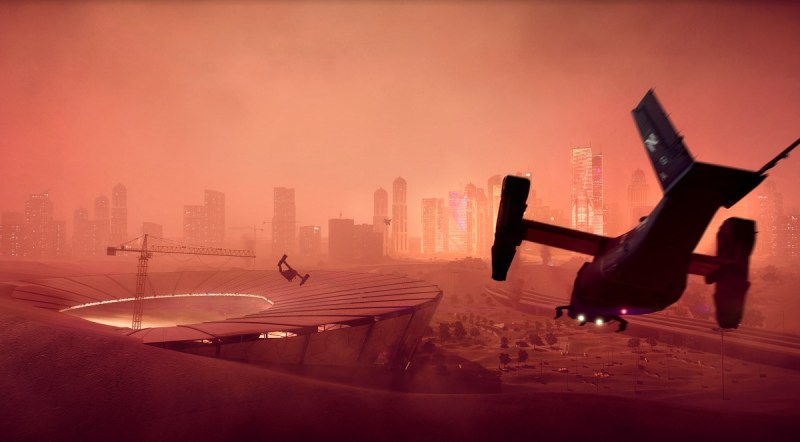