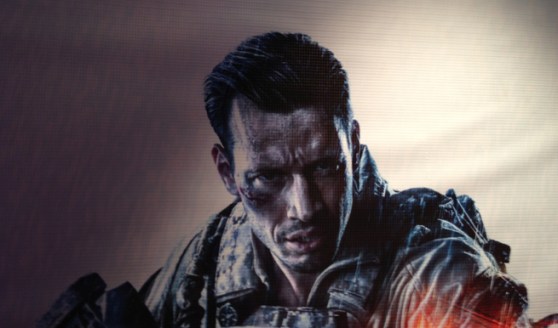 What’s the one song you don’t want to die to?

Electronic Arts has a lot riding on its upcoming military shooter Battlefield 4 — one of the few genuine top-tier franchises left in its arsenal. It’s got to have a few secret weapons of its own to compete against its traditional competition, Call of Duty. According to executive producer Patrick Bach, it’s got them. The design approach for Battlefield 4 and the entire franchise going forward comes down to three words. “Human, dramatic, and believable,” says Bach.

The 17-minute, hands-off demo opens inside a quiet, dark taxi. It’s upside down, sinking in murky water, with four Special Forces soliders trapped inside. Worst of all, ’80s power ballad “Total Eclipse of the Heart” is playing on the radio.

Squad leader Dunn is pinned in his seat and hurt bad. You play Recker, and Dunn hands over his magnum and one last order: shoot out the window, get everyone else out. Recker’s teammates scream at him not to do it. Dunn shouts it’s the only way, he’s already a goner. Recker hesitates, slowing tightening his aim on the window. A chance for his team means no chance for Dunn. He pulls the trigger. 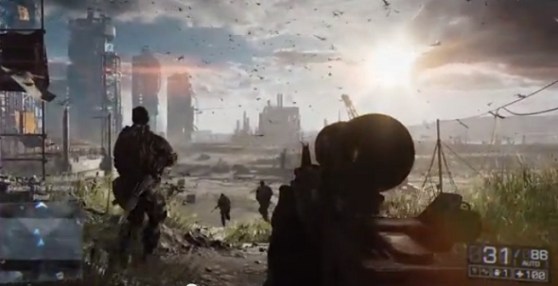 Step back 16 minutes in time. Recker creeps through a bombed-out school, rainbow murals smashed against graffiti and gang tags. He gently sloshes through standing water while a Russian spec-ops team hunts him, running past thin windows up by the ceiling. Recker’s alone and slowly meets up with others from his squad. They’ve got some hot intel, they’re severely outclassed by the Russian operators who ambushed them, they’re way too far away from their extraction point, and Irish, the big guy on the team, hasn’t shown up yet.

Turns out Irish is just across the street below. So are the Russians. Dunn and Recker rip down boarded windows and cover him, the quiet whispers and drip-drip-drip of water vanishing in thunderous gunfire.

Even with cuts to jump to the interesting bits, Battlefield 4 shows off an interesting flow between quiet and loud moments. It also shows off two tiers of squad commands; Recker can order his team to focus fire on a target while he sneaks around on the flank, blowing through a wooden fence and popping a jeep-mounted gunner in the back of the head. “You could take that jeep head on,” says Patrick Soderlund, executive vice president at developer DICE, “and probably die.” Different area comes with different options for gameplay. Recker sneaks up on one rooftop sniper for a melee kill that leaves dogtags dangling from his knife. Consider those a collector’s item.

When their extraction helicopter shows up, Recker can also order it to hammer targets. A column of troop transports detonates under the onslaught. The explosion rattles teeth, a 10-ton response to a two-pound problem.

That makes it easier — but not easy — to cross a no-man’s land under a swirling cloud of crying seagulls and reach the extraction point … a hollowed-out, overgrown industrial complex. It’s almost like they’re walking through a forest with damp earth under their feet and dead leaves falling around them. Their ride’s waiting for them on the roof. A Russian gunship intercepts them first, shredding the fragile building around them. Recker and his guys try to flee, but they quickly run out of places to go. Everything explodes; the entire building flies apart around them. Recker gets a split-second glimpse of his friends falling and then they’re gone.

You can feel the calculating acceleration in the intensity. The calms always feel like the storms are all queued up and ready for the game to step on the gas again. When the combat ramps up to full speed, it gets thick and evil. Soderlund talks about aiming for a more multiplayer feel in the campaign gunfights: longer, meaner, more fluid, and less predictable.

Fortunately, the rapid shifts in tone work in Battlefield 4’s favor because the story caters to them. Recker and company start on the defensive and stay on the defensive, even when they plow through opposition. They are the hunted and the wounded. As-is, I sympathize more than I care. With a little more context and a little more time spent with these characters, the impact of everything that happens to them could really be impressive. 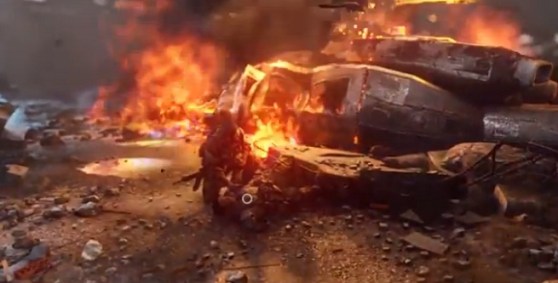 Dunn especially. Everybody makes it through the collapse, but Dunn’s leg looks like a sausage that exploded in the microwave, pinned under a slab of concrete, bone turned to powder. The only way he’s coming home is if Recker cuts him free. With a combat knife. This is gonna hurt. I watch several people in the audience flinch and look away. The all-new Frostbyte 3 engine, running a live game on an optimized PC, makes the characters look almost photo-real and accurate likenesses of the motion-capture actors, according to Soderlund. So when Recker hacks through the meat that used to be Dunn’s leg, you feel the pain and terror.

They drag him out and pick up a taxi from a terrified civilian, but that gunship isn’t letting go. Vehicles return in Battlefield 4 — that jeep with the mounted gun becomes a convenient ride — and the cab’s run climaxes when you’re handed an RPG for some slo-mo retribution which, naturally, spirals out of control. The dead gunship falls out of the air, sending Recker and his team careening into the deep. Dunn gives his final order and dies listening to “Total Eclipse of the Heart.”

The ride ends. The intel they secured is next to worthless. It’s one final gut-punch in a demo full of them.

Battlefield 4 will release in Fall 2013, making it a likely launch title for next-gen platforms. No platforms have been announced yet.