Beat Saber’s formula — the rhythms of Dance Dance Revolution mixed with Fruit Ninja gameplay and Tron aesthetics — has proved popular with PC VR gamers, and Sony PlayStation VR owners will soon get in on the action. Speaking with GamesBeat this week, Beat Games CEO Jaroslav Beck shared some new details about the upcoming PSVR port, including some good news on its PlayStation 4 performance.

Even though Beat Saber is being ported from PCs that have more horsepower, Beck suggested that the PlayStation VR version won’t be noticeably downgraded in graphics, sounds, or motion controls. “We were very surprised that we don’t have to make many changes,” he told us. “PlayStation is capable to deliver almost 1-to-1 experience as we have on PC right now.”

Above: You slice blocks with your swords in sync with the beat.

The PlayStation VR headset supports both PS4 and PS4 Pro consoles, and players have generally been pleased with VR performance on even the lower-end machine across earlier games. We asked Beck whether PS4 Pro users will see any extra benefits, and the answer was yes: The PS4 Pro “will render the game in higher resolution, and some of the effects will have higher details.”

Given the larger size of the audience outside VR, I wondered whether Beat Saber will support non-VR play on TVs. Beck said the company’s “experimenting with some ideas, but we can’t confirm anything yet.” Generally, he said, playing a VR game on a TV is the difference between “watching sports on TV and actually playing them. If you play a football console game on the TV, it can’t be compared to the real experience.”

I also asked Beck whether there would be any single feature exclusive to PSVR that PlayStation fans could call their own. “Yes,” he told us. “There will be quite a lot of things we would like to deliver to PS VR exclusively, but it’s a little too soon to talk about it. Stay tuned!” 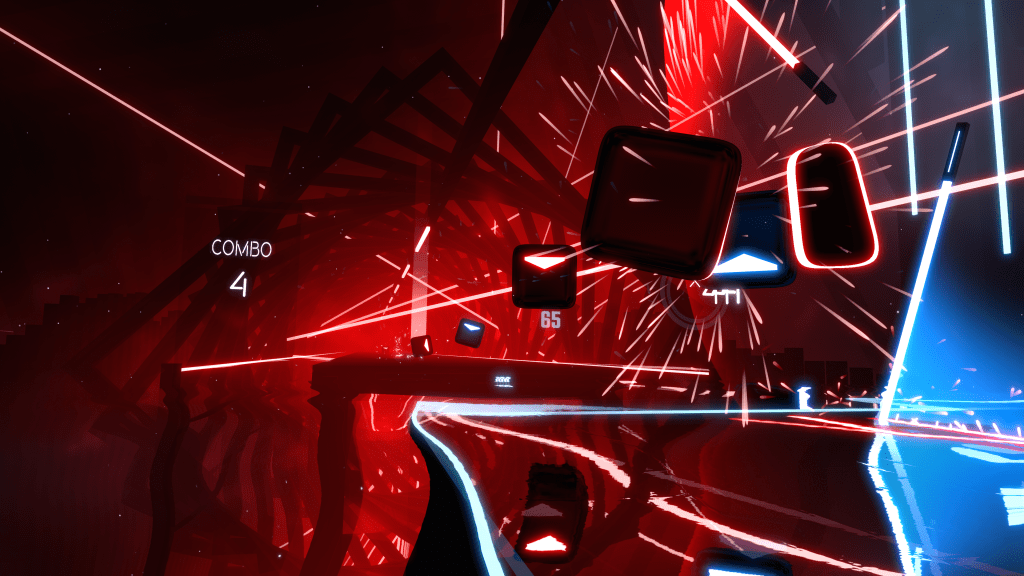 Above: Beat Saber has been one of VR’s biggest hits on PCs, and is coming soon to PlayStation VR, with its even larger installed base.

Given how often a given platform is held back by contractual requirements for feature parity, we were surprised that there might be not just one PlayStation-exclusive feature but “quite a lot” — and that’s exciting news for PlayStation VR owners, assuming the extra features pan out.

Beat Games has been working on multiplayer support, a level editor, and additional music for the title, which has been one of VR’s biggest indie hits. On PC formats alone, it sold over 100,000 copies in its first month, and is reported to be somewhere in the 200,000 to 500,000 range at this point. Adding the PlayStation VR’s user base, which is currently the largest in the VR industry, could add well over 2 million potential players to the pool.