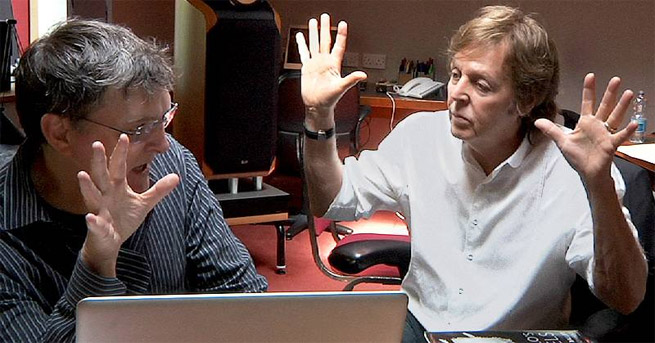 Sir Paul McCartney, the former Mr. Heather Mills, announced on Twitter that he is working on music with Bungie, developer of the sci-fi first-person-shooter Halo. It’s a match made in the mind of a baby boomer who is desperately trying to reconnect with his angst-ridden son.

“I’m really excited to be working on writing music with Bungie, the studio that made Halo,” McCartney said. The 70-year-old knight included a picture (seen above) of him working closely with long-time Bungie composer Marty O’Donnell.

“It’s a fascinating market,” McCartney said. “A new computer game sells so much better than a new CD these days. Young people will hear my music for the first time in a game.”

Bungie and McCartney have yet to announce what they are working on specifically, but it’s not Halo. After Halo: Reach, the studio has left the series behind and in the hands of Microsoft.

In May, a judge unsealed the contract between Bungie and its new publisher Activision due to ongoing litigation between that company and some members of Infinity Ward (the developer of the Call of Duty: Modern Warfare games). The contract revealed a series of games code-named Destiny that debut in the fall of 2013.

Since the rock legend is working with Bungie, we’re hoping McCartney rerecords “Band on the Run” as “Man on the Run” for a new Marathon game.