Heard of Cafe Bazaar? I doubt it rings a bell unless you’re in the Middle East or keeping tabs on trends in emerging mobile markets. It’s the third-party app store that runs the show in the Islamic Republic of Iran.

Hessam Aramandehi, Cafe Bazaar’s CEO, recently said during our panel talk at October’s Game Connection that his company’s app store covers “85 perecent of the market with 25 million active installs.” This veritable monopoly makes sense when you consider that neither Google’s nor Apple’s app stores serve Iran, due to obvious issues concerning current and ongoing sanctions (and are often even altogether blocked). This creates the rare time-sensitive opportunity that Cafe Bazaar is neck-deep in benefiting in.

In terms of annual revenue, Newzoo’s latest report estimates total Iranian games revenue in 2015 to be USD $194 million (October 19, 2015). I clock mobile games at 25 percent of that, which tallies to about $50 million. It’s hard to work out Cafe Bazaar’s revenues from there, for a variety of reasons that can’t fit into this current article, but it’s probably somewhere around $30-$35 million for 2015. These are my own calculations.

In order to give you a firsthand look on what it’s like to publish on Cafe Bazaar, here’s a live case study:

Enter our friends at Tarboosh Games and their Desert Zombies freemium arcade title, which we at Gameguise localized from head to toe — that is, translation of all game contents to Farsi, including voiceovers and payment integration. The game is currently featured on the regional Middle East and Turkish Apple App Store, so it’s quality stuff and as such the Cafe Bazaar editorial team decided to feature it within days of being approved and live. 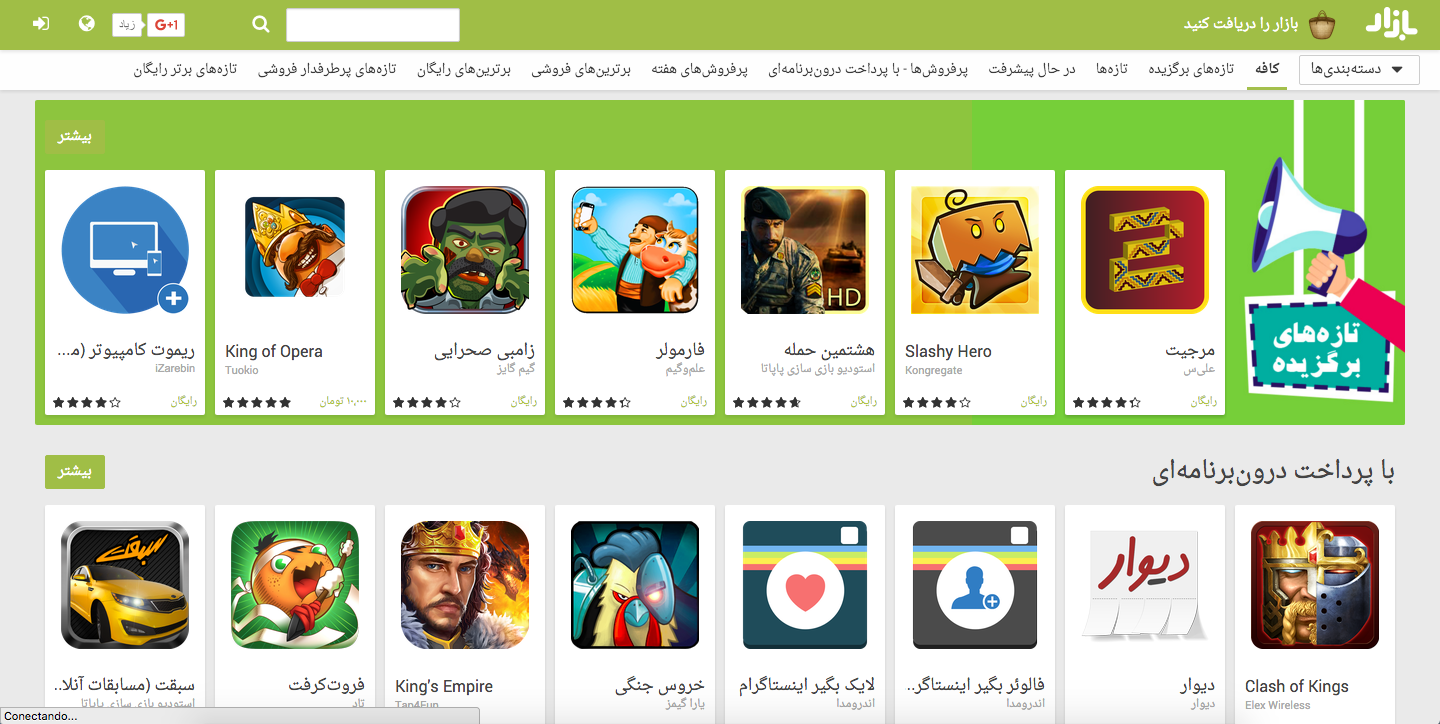 Above: Cafe Bazaar home page (Desert Zombies is featured third from the left at cafebazaar.ir)

Aside from extremely exceptional games like Clash of Clans, the pricing of freemium packs need to be adjusted to the local Iranian GDP, which for comparison’s sake is half that of Saudi Arabia or Turkey, and a whopping 2.4 percent of the United States (IMF 2014). Exceptional titles will draw in the whales but most of them will suffer if they are priced out at global rates that don’t take into account the average player’s wallet size.

Non-mass multiplayer titles should integrate native ads to help players ‘power up’ and progress through the game without paying. This can only be done through Cafe Bazaar’s ad network subsidiary, Adad. But don’t expect high revenues in return as of yet. Iran’s ad network market is growing but still very low in comparison to global standards.

There are also some drawbacks that the team at Cafe Bazaar will have to work to resolve such as that the backend analytics isn’t real-time on various fronts such as having to wait a full-day before you can see how many installs you’ve had of your game or app. So make sure your own analytics tools are operational so you don’t have to suffer from unnecessary lag. Another is that they take a 30 percent cut of gross revenues. Throw in a 9 percent consumption tax and developers get 61 percent net revenues.