Tuesday night, I heard my UploadVR editor, Ian Hamilton, say something he’s never said before: “Hey, man I think we should go to a bar.”

Once I’d finished administering the necessary Voight-Kampff Test to confirm he was not a replicant, I grabbed my jacket and joined him on this noble quest. Our destination was Caesars Palace Hotel and Casino in Las Vegas, Nevada. Within those hallowed, vaguely bleach-smelling halls, was Alto Bar — the first Oculus-equipped purveyor of adult beverages and virtual reality in Las Vegas.

Alto Bar’s new Rift lounge is usually open from 4 p.m. to 2 a.m. and guests must be 21 or over to participate. We came a bit earlier in the night, around 9 pm on Tuesday, and saw a few other people wander in to check out VR too. We saw two Rifts plus Touch setups each with a pair of tracking sensors in front. There were plenty of plush chairs for comfortable socializing and the Rifts themselves were placed in the room’s corners with small square mats to stand on.

The Rifts were running most of the usual suspects for Oculus’ many in-store Touch demos. The Unspoken, VR Sports Challenge, Oculus Medium, The Climb and Bullet Train were all ready and waiting. At each of the two Rift kiosks was a representative wearing an Oculus shirt.

If you look closely you can see me either immersed in VR or preparing to do a…backflip…maybe?

The Oculus Lounge is a “limited-time” experience and the Alto Bar website lists March 28 as the end date (the one year anniversary of the Rift’s release). Facebook is actively spending resources creating spaces for people to experience VR, many for the first time.  The company has also been spotted in recent weeks offering Oculus-powered demos in airports.

Our demo was free but we were told that, in the coming weeks, Alto Bar might begin requiring a purchase before they would be granted access to the special Rift area. Mixing alcohol and VR is a notable test — we didn’t surface any other “VR bars” in a cursory search, and we were asked to sign a waiver during the process. 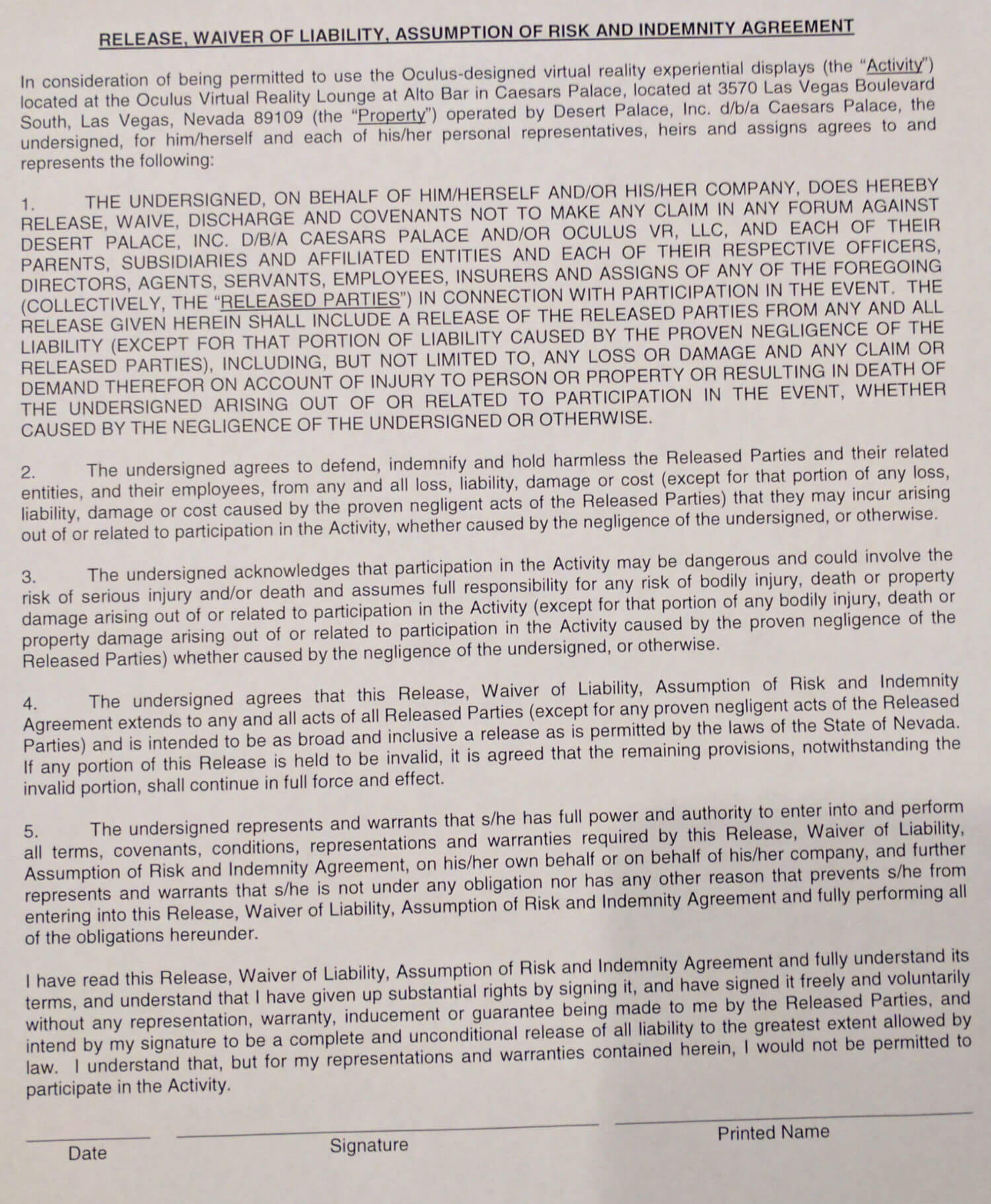 Above: Waiver for the Oculus Lounge.

Facebook’s Oculus team itself notes in a health and safety warning document:

A comfortable virtual reality experience requires an unimpaired sense of motion and balance. Do not use the headset when you are: Tired; need sleep; under the influence of alcohol or drugs; hung-over; have digestive problems; under emotional stress or anxiety; or when suffering from cold, flu, headaches, migraines, or earaches, as this can increase your susceptibility to adverse symptoms.

We’ve seen tests from companies pairing VR with hotels, deploying it as in-flight entertainment and modifying roller coasters for a new experience, but mixing in alcohol in a social atmosphere is a bit different. It is easy to imagine problems mixing an excess of alcohol with flailing arms in VR. In that respect maybe it makes sense that only demo content is installed on the devices. This isn’t exactly a arcade bar experience with the limited content available to sample.

If we were able to get a competitive magic duel in The Unspoken up and running between the headsets, plus a few drinks, the chance of someone falling into the kiosk holding the computer, monitor and Rift sensors would almost certainly go up. Instead, we got an introductory Oculus demo similar to the ones we’ve seen at a conference or Best Buy, it just happened to take place in an up-scale bar in Las Vegas.