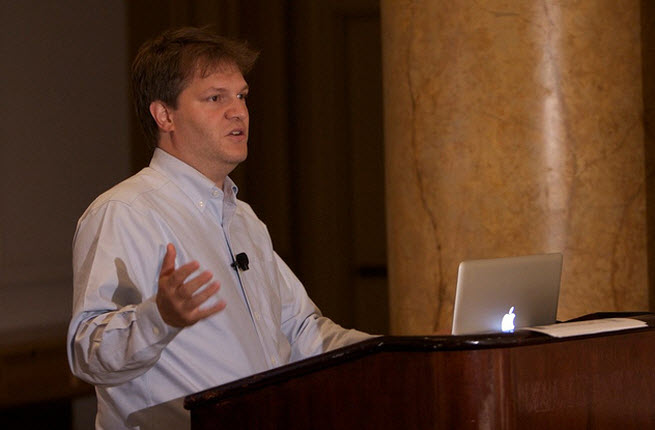 His career is built on the notion that video games can achieve good in the world beyond entertainment. Sawyer has worked on games such as the university simulation Virtual U as well as projects for Cisco, DARPA, ONR, Leimandt Foundation, Cadbury, USAID, Lockheed Martin, and several other Fortune 500 organizations. But many games that inspire people to do good or get off the couch and exercise have now gone far beyond government contracts into the mainstream of gaming. It started with the success of the Nintendo Wii in 2006 and has morphed into sensor-based health devices that we carry around with us.

We interviewed Sawyer in advance of this year’s Games for Health conference, which will be held June 12-14 in Boston. Here’s an edited transcript of our conversation.

GamesBeat: So tell us what is the latest in the Games for Health movement?

Ben Sawyer: We’re working on a new strategy for the general Games for Health field that we’ll be working on all summer and then unveiling in the fall. It represents looking at everything we’ve done over the last seven years, especially a lot of the conference material. We’re constantly using the conference as a means of trying to understand where we think things are headed or where we think they should head. So we’ve got a lot going on in terms of various health-game activity.

The conference this year is looking pretty strong. The lead keynote is going to be Microsoft’s director of health [Bill Crounse, a doctor and senior director of worldwide health for Microsoft]. He’s not necessarily working every day on Xbox, Kinect, and stuff like that. But Microsoft is now broadening and looking at Xbox and Kinect as larger ecosystems. People on the health side are hacking and doing things with Kinect.

Microsoft is a player in traditional health information technology, with products like HealthVault and general Windows platform. So it’s going to be interesting to see the perspective of someone who is looking at things from both lenses — the entertainment side as well as the traditional health information technology side. I’ve always said that if anybody was going to really put together that kind of ecosystem, it was probably going to be Microsoft. Unlike the other players in video games, Microsoft has an established enterprise group. It’ll be interesting to see his perspective on where he sees things going.

If you look at Sony’s recent announcement about their restructuring, they’ve really highlighted health as an area that they intend to get involved in. So you may see Sony start to think more about building up its health IT side or what it considers a health products group. That may foreshadow deeper activity. I can’t say much about it because it’s hard to tell, right? Sony’s going through so much. They highlighted health as an area that they see as something that they’re going to move forward more aggressively with.

And then Nintendo, they’ve done quite a bit because of the nature of the Wii system, but they don’t really have that health IT infrastructure, nor would I ever expect Nintendo to do those things. I’m excited about what Microsoft might say. Last year, we had Google’s health strategist with us. We’re starting to see a broader group of industry leaders and health IT start to pay more attention to games. 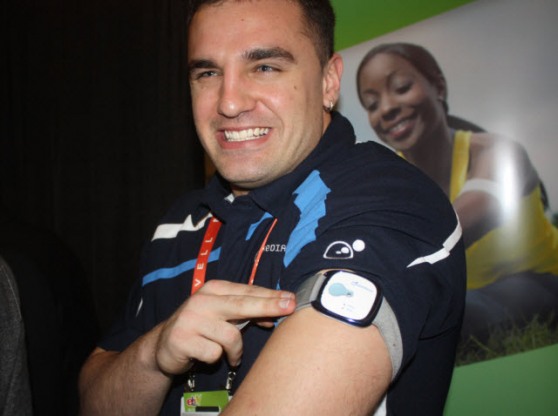 GamesBeat: I’ve seen a lot of these Silicon Valley startups get into the health picture, with all of their different step counters and armbands.

Sawyer: Last year, we added a sensor day because of that, and this year we’re calling it sensors and gamification because the two seem to be somewhat tied hand in hand. And then I’ve been working on some of this privately myself. I am very, very interested in what’s going on there. What we see happening that I think is interesting is this whole rise of biometric sensors in games. The first biometric sensor that most people probably interacted with the most would be like an accelerometer in a Wii controller, or you could take a visual sensor in terms of what Kinect and Sony’s Move are doing.

But the real, soon-to-be-maybe explosion of things would be wearable mobile sensors. Those include two big groups. One would be the pedometer, gyroscope, GPS that’s on every viable smartphone these days. That would be what I would call a built-in sensor on the most ubiquitous mobile platforms: mobile phones. But then you’re also starting to see these things like Jawbone UP, Nike Fuel, Adidas miCoach, Fitbit, and BodyMedia. There’s a good half-dozen major and then probably another half-dozen smaller players, like Strive and others, coming about.

There’s sort of two distinctions. They’re either offering a high-end sensor capability, like in the case of BodyMedia. The next big thing will be heart rate. But then, on the other side, what they are trying to move toward is this ubiquitous, always-on, totally dedicated accelerometer to track movement and specifically steps. That’s the most common form.

Now the question then is: How do you then hook these things up into applications that offer some level of motivation, framing, or other forms of interaction that rewards someone beyond your own personal interest in counting your steps? Is there something more enticing? That’s where the games side comes in, and you’re seeing everything from simple things we were showing two or three years ago, like Horsepower Challenge from Humana, to more complicated interesting ideas around what Will Wright and others at the Stupid Fun Club call “integrated gaming.”

With this idea, we take all of our data sources and turn them into feeds that can be integrated or turned into some sort of gameplay. It’s got tremendous upside. We’re going to see a lot of false starts: things that seem like they get at it but are dead ends. But I think over time, especially as more game developers get involved, I think you’re going to see what I consider the rise of the human joystick, where you yourself will know that certain physical behaviors are talking passively through these bracelets or watches or things in your pocket to the Internet, and by virtue of doing that, they’re talking to a game or multiple games that you’ve decided to share that input with. A perfect example of it might be: You know that if you manage to walk at least a thousand contiguous steps between, say, 9 a.m. in the morning and 5 p.m. in the evening, then you get a reward.

Then the next question is, well, what does that human controller do? Does it generate a reward or does it generate a move of some sort? Once you get into that sort of element, then it really becomes compatible with a lot of different types of games. Eventually, I think that these two worlds of games that we’re playing now and physical activity will merge in ways that we hadn’t thought about before. But as you can expect, those rewards are a real big deal, not just in games but in health these days. Rewards are going to play a role.