Doom is back. And it’s just plain old Doom.

Bethesda Softworks showed off a preview of its latest Doom game in front of a crowd of fans at the Quakecon 2014 event today in Dallas. The realistic 3D sci-fi shooting game will likely push the edge of animation technology, as Doom fans demand the very best in 3D graphics. The basic Doom story isn’t much. A space marine lands on Mars and finds it infested with demons who have come through a portal from Hell. So he has to wipe them out. But with each generation of Doom, the tech and graphics get better. The new game will carry the name Doom, not Doom 4 as has often rumored.

In today’s revelation, Doom executive producer Marty Stratton took the stage at Quakecon. He said it is an origin game, fast-paced, and set outside of the UAC research facility on Mars as it is being invaded by the forces of evil. This game will move much faster (60 frames per second) than Doom 3. It will have melee combat in full 1080p high-definition. You’ll be able to carry a bunch of huge weapons all at the same time. In the demo, the player ripped a demon in half, then rip his arms off. On social media, fans said that Stratton got a standing ovation.

The game will launch on the PC, Xbox One, and PlayStation 4.

Fans set their social networks on fire as they talked about the unveiling. It’s a big deal since more than 10 million copies of Doom have been sold since id Software (which Bethesda owner ZeniMax acquired) released the first game in 1993. The original represented the first instance where game developers separated a game into its design and an engine. The Doom engine, which tech guru John Carmack created, was the underlying platform on which to build the game. The industry now has many such engines, such as Unity, Unreal, CryEngine, and a new Doom engine (known as idTech 6). That new engine will likely push lifelike graphics to a new level.

Of course, Doom’s influence is broader, as it kicked off the graphic-intentesive first-person shooter genre, which generates billions of dollars in revenues a year. Many of the original copies were given away for free. And it spawned six sequels and a movie.

The last Doom 3 game debuted in August 2004. That game had haunting shadows and realistic lighting, but lots of fans hated the slower 30-frames-per-second speed. Carmack first teased Doom 4 in 2007. But Bethesda felt that the earlier game didn’t meet the quality bar, and it rebooted development. 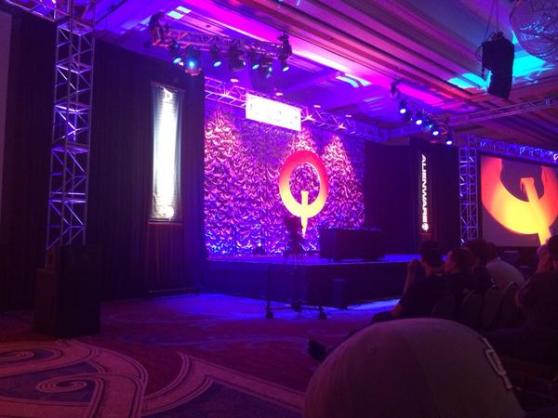 Above: Before the Doom reveal