Todd Howard, executive producer and game director at Bethesda Game Studios, has made games like The Elder Scrolls and Fallout for decades, and tonight he was honored as the 22nd inductee into the Hall of Fame at the game industry’s equivalent of the Academy Awards.

Howard was honored by his peers in the Academy of Interactive Arts & Sciences during the DICE Awards tonight, the game industry’s big event in Las Vegas.

Howard was recognized for having created some of the industry’s most successful games by pioneering open-world gameplay, and played a key role in the creative direction and growth of highly regarded franchises, including The Elder Scrolls V: Skyrim and Fallout 3. Both took awards for Game of the Year in years past.

Both games are known for their experiential approach to world-building and storytelling, and have earning multiple DICE Awards throughout the years. 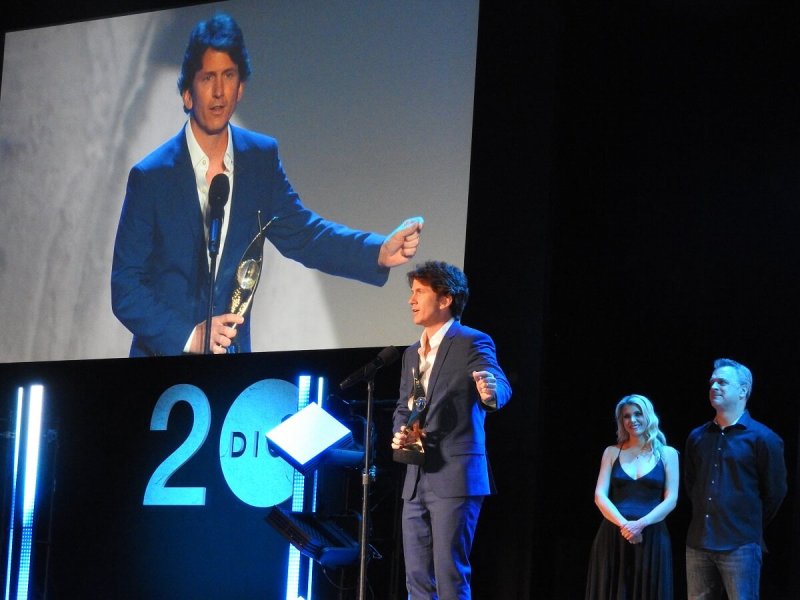 Pete Hines, vice president of public relations and marketing at Bethesda, introduced his colleague, saying, “Todd is above all else a great person. He does the right things in the right way for the right reasons. In times like these that can be a little tumultuous, it’s great to have people … like Todd who are as good as he is.”

Hines said Howard’s family, including his sons, were in the audience for the first time. Hines joked that Howard would rather stay behind and work with the game teams, rather than go out on the road doing PR for games. In fact, Howard travels so rarely that Hines has to babysit him on trips and make sure he knows where to go. But Howard knows his way around games, and his fans play his titles for hundreds of hours.

“My brother and I gave up our allowance for life to get an Apple IIc,” Howard said when he went on stage. He said his wife gave him a hockey game one year that was made by Bethesda. He drove to that office to ask for a job, and he has been driving to the same office for 23 years. He said the awards is “for all of them” in the studio.

“It’s an incredible honor to work with all of you every day,” Howard said. “Everyone at Bethesda has a deep love of video games and a dedication to do something special.”

Howard said he has had a front row seat to the “explosion of gaming” in the last 20 years. “I wish all of them could see it through my eyes.”

“I’ve had a front row seat to the emergence of history’s greatest entertainment industry,” Howard said. “It is humbling to be honored for what I have given to the industry when the truth is it has given me so much more.”