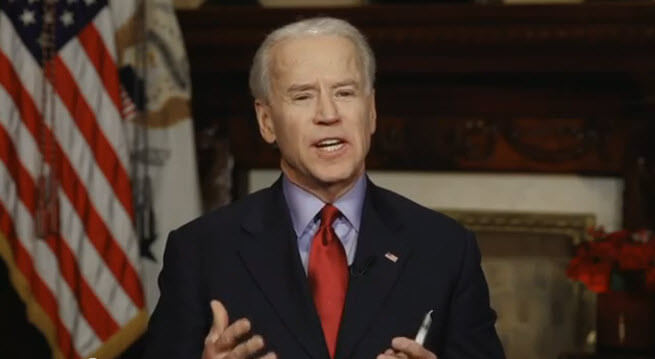 Vice President Joe Biden held a web meeting today on reducing gun violence in the wake of the Newtown, Conn., school massacre. In a Google Hangout, Biden said he met with 228 groups, including video game company executives, physicians, researchers, and experts on gun violence. Midway through the hangout, the conversation turned to the topic of violent video games.

The conversation showed that violent video games are still high on the list of concerns that people have in the wake of recent school shootings. Among the participants who shot questions at Biden were Silicon Valley entrepreneur Guy Kawasaki, YouTube video host Philip DeFranco, Theresa Tillman (who is considering buying a gun), and family blogger and child therapist Kimberly Blaine. The “fireside hangout” event was hosted by Hari Sreenivasan of the PBS NewsHour.

The vice president didn’t condemn violent video games, but his choice of words showed where Biden leans. He noted that the car industry opposed studies on crash research for many years because they didn’t want to have that research used in arguments for more car safety, which would raise the costs of making cars.

“The one thing that bothers me is there’s part of the interest group population out there that are afraid of facts,” Biden said. “Let the facts lead where they will and let the research be done,” Biden said. “That’s one of things that the president and I believe very strongly: Let the facts work.”

He added, “There is no hard data about whether or not these excessively violent video games in fact cause people to engage in behavior that is antisocial, including using guns. There is one study done, the American Academy of Pediatrics. They said if you watch three to six hours of video games — and a lot of kids do that — leads to aggressive behavior. They didn’t make the next connection that it leads to violent behavior. But there are no studies done. I recommended to the President we do the research.”

He said the Centers for Disease Control and the National Institutes of Health should investigate the pathology behind gun violence.

“We shouldn’t be afraid of the facts,” he said.

The game industry has maintained that there have been a lot of studies done over the past two decades and none of them have shown that games cause violent behavior. DeFranco pointed out that $10 million in research has been done on violent media. The International Game Developers Association, the Entertainment Consumers Association, and the Entertainment Software Association have all urged Biden not to jump the gun and blame video games for violent behavior.

Biden said that the assault weapons ban, which expired after a decade, wasn’t a failure because it had reduced the number of casualties among law enforcement, which is increasingly outgunned by criminals. He said it is OK to put reasonable limits on gun ownership without infringing on sporting or self-defense rights. Biden said he supports beefing up mental health resources, particularly for educators, to detect aberrant individuals before they become violent. Biden said he met with the National Rifle Association, which objects to restrictions because they lead to a “slippery slope” toward banning guns.

Here’s the video below.