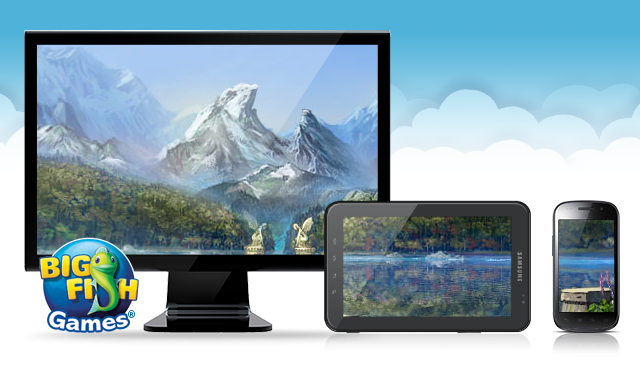 The cloud is quickly becoming an integral part to the future of the game industry, a vision that Sony clearly believes in when it recently acquired Gaikai, a cloud-based gaming service, for $380 million. Gaikai’s rival competitor, OnLive, hasn’t been doing so bad for itself, either.

Amid this ongoing war between services that stream PC and console-quality games over an Internet connection, the casual gaming space has been left untouched. Big Fish Games, the mega publisher of casual games for PC, Mac, and mobile devices, is looking to change that.

Last week, Big Fish gave us a sneak peek of its (unnamed) cloud gaming service — a first in the casual games market — that is set to launch this summer.

“There are others looking at core [games] streaming,” said Will O’ Brien, the VP and general manager of cloud gaming at Big Fish Games, “and the technology behind that needs to be super-low latency and high bandwidth. They’re trying to solve a different problem than we are. We’re really excited about what we have here. We know it’s something you can play today.”

O’Brien brought an assortment of Android tablets, along with an iPad and a laptop, to prove his point. With the help of his 4G hotspot, he showed us two different types of games running on the service: a popular tile-matching puzzle game and a hidden-object title.

“So what’s happening is that the game’s initiating a session with the server and streaming down to this [tablet],” O’Brien said. “So the device is locally decoding the video. When I tap, it’s sending a click signal to the [remote servers]…it’s taking this game that was originally built for the PC and now making it work on a tablet without changing the source code.”

Like Netflix, Big Fish Games’ service can dynamically adjust the quality of the video, depending on how strong or weak your Internet connection becomes. At first, it was somewhat difficult to play the hidden object game due to how pixelated the video looked, but the picture quality cleared up a few moments later as the connection strengthened. O’Brien then showed us the same game running side-by-side on two different devices: Once he exited the game on a tablet, he immediately picked up where he left off on a laptop.

“[Our service] is fulfilling that vision and that promise of cross-platform ubiquity without having to build the games to support every platform,” he said. “So I think it’s really disruptive and groundbreaking in the industry and Big Fish is in a position [to do that] because of our brand, our millions of customers, our developers, and the content we have.”

According to O’Brien, it wasn’t until recently that the technology was feasible enough to create a seamless multiplatform gameplay experience. “[We started working on this 18 months ago] because consumer broadband rates have been increasing,” he said. “We can meet the mainstream customer’s profile today, [where] the average Internet speed in the U.S. is about 3.2Mbps, and we’re targeting a 1 to 2Mbps. So we can meet that…. This is bleeding edge, but also viable.”

Though Big Fish Games has released over 2,500 titles at its online portal within the last 10 years (releasing one new game every day for six of those years), its cloud gaming service will start out with just a small selection of that catalog. When it launches later this summer with a proper name and branding, around 100 games should be available to play on demand, with new games added every week.

Pricing has yet to be announced, but O’Brien said they’re considering the usual all-you-can-eat subscription, along with a possible free-to-play model with limited content and ad-support. And while their cloud gaming service is currently running on PC, iOS, and Android, Big Fish Games will reveal specific platforms that support it later on this year.