Big Fish Games is partnering with Bitcoin wallet provider Coinbase to allow gamers to buy their games and in-game virtual items using the increasingly popular Bitcoin digital currency. The move is part of a larger effort to get around transaction fees and support a global digital currency. 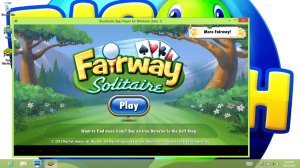 Zynga made a similar announcement, but it was only as a test run for the PC version of FarmVille. Big Fish Games plans to roll Bitcoin payments across all 3,000 games in its library. That makes Big Fish one of the biggest retailers to embrace Bitcoin. Others online retailers accepting Bitcoin include Overstock and TigerDirect.

“It’s a fun project, and it makes sense,” said Paul Thelen, chief executive of Big Fish, in an interview with GamesBeat.

Thelen said that about 8 percent of Big Fish’s gross revenue goes to transaction fees. With Bitcoin, there is no fee for the first $1 million in transactions, and the fees after that are less than 1 percent, Thelen said.

Big Fish started looking into Bitcoin payments because it had a Bitcoin enthusiast among its engineers. You will be able to buy online games directly from Big Fish using Bitcoin, and you can also use the currency to buy virtual goods via in-app purchases in titles such as Big Fish Casino, Room of Memory, and Bush Wacker 2. Half of Big Fish’s $266 million in revenue in 2013 was handled via its e-commerce system.

Big Fish considered setting aside 8 percent of each transaction as an investment in the Bitcoin currency. But it decided that wasn’t its real business, and that selling games was the priority. So the company will immediately settle payments with Coinbase and convert the Bitcoin payments into dollars. Thelen said he hopes that gamers adopt the digital currency more quickly than other shoppers.

Coinbase is one of the stable Bitcoin platforms with a million consumer wallets and 25,000 merchants accepting it as a Bitcoin transaction processor.