BioShock Infinite addresses the racist history of the United States in a pretty astonishing way. I came away pleasantly surprised at how developer Irrational Games wove such powerful social issues into a very captivating narrative. The racial component starts off subtle but then becomes unavoidable at later points. Experiencing it first-hand is a testament to the power of interactive media and Irrational’s storytelling abilities.

I got to play through the first four hours of this highly anticipated first-person shooter for the PC, Xbox 360, and PlayStation 3 at an event in Los Angeles last night. As a bonus, Irrational Games creative director Ken Levine was on hand to help expand on some of the nuanced issues the game presents. (Warning, early game spoilers ahead.)

The ‘white’ city on the hill

The year is 1912 in the floating city of Columbia, which has successfully seceded from the United States. Its founder is a supposed prophet named Comstock. Players assume the role of Booker Dewitt, a contractor who ends up in this airborne wonder on mission to save a young woman, Elizabeth.

The sun is shining on Columbia, as it floats above the rain clouds pouring on the surface below. A barbershop quartet on a small airship tours the city singing a cover of “God Only Knows” from The Beach Boys (this musical time warp is supposedly explained later in the game). The group weaves between buildings as the structures connect and disconnect from one another; stores advertise their arrival on the hour. 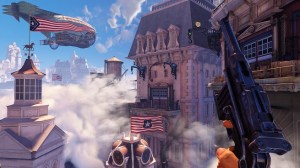 The city is majestic and beautiful, with all kinds of nooks and crannies to explore. The families, couples, and everyone else all seem quite happy. Columbia appears to be quite the utopia in the sky … well, for white people, that is. The fact that everyone in the city is Caucasian is not a coincidence.

I make my way to a carnival that cleverly introduces the mechanics for shooting and special abilities (called vigors) as games of chance. One challenge involves shooting cardboard cutouts of the “dirty, violent” Vox Populi resistance group as they slide across a model of the city. Some of those cutouts don’t look white, but it’s hard to tell.

At one point Dewitt enters a raffle and has the winning ticket (which is actually a baseball). The unsavory man running the contest asks the crowd if his assistant “is not the prettiest young white woman you’ve ever seen?” She then lifts the curtain on stage.

It turns out the “prize” is a chance to throw the first pitch at a tied up black woman and white man. They were presumably caught being an intimate couple, and the man pleads for people to spare the woman, claiming responsibility for the ordeal. Oh, and also on the stage are cutouts of black people — caricatures made to look like monkeys stealing a diamond ring.

The player is given the choice of whether to throw the ball at the couple or the asshole running the raffle. I chose the racist, the police came and identified me (or Dewitt, rather) as the false prophet, I grabbed one of the men in blue’s special skyline hook weapons, and then killed the lot of them.

Later, while on the run from the authorities, an overhead speaker announces that the false shepherd is either a “Mulatto dwarf or a Frenchman with a missing left eye.” The voice also warns of the shame of letting your wives and daughters near this anarchist.

Dewitt eventually arrives at a safe house that has posters hanging up advertising a sermon with the message, “Until the Negro is equal, none of us are equal.” A painting of President Abraham Lincoln, who abolished slavery in the United States, sits in the other room.

A nearby building has something different: A giant statue of Lincoln’s assassin, John Wilkes Booth, stands in the lobby. A painting in the dining room depicts Booth shooting a devil version of Lincoln. Where would you find such a statue? Unsurprisingly, it’s Columbia’s local chapter of the Ku Klux Klan … who dress in navy blue and have an occult flair. The giant emblem proclaiming “Protecting our Race” seems to be in the right place. 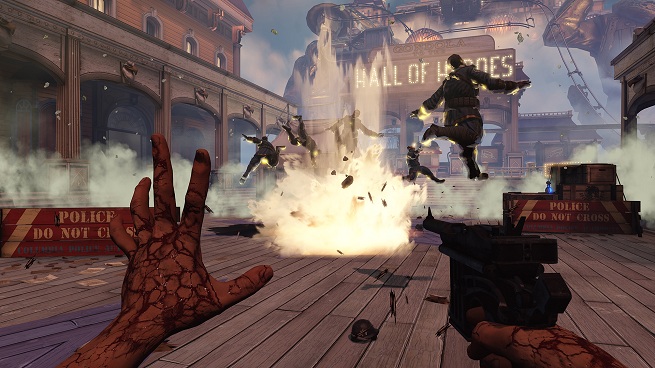 During my battle with these racial purists, I took advantage of the brutal finishing moves available with the skyline hook (which is normally used for riding solo on the public transit rail). I decapitated one man, tore open the chest of another, and clamped straight down on the jugular of a third.

This moment in BioShock Infinite can’t possibly help Levine’s standing with racists. “I had a very disturbing day where somehow I ended up on a white supremacist website,” he told me. “And they said this is a game by — and I’m quoting them — ‘the Jew Ken Levine’ and it’s a ‘white-person killing simulator.’ That’s how they described it.”

Levine sees it more as a reflection of what race relations in the U.S. were like in 1912. At the beach boardwalk, for instance, the Irish man, hidden from sight as he operates the wave machine (the ocean is simulated since the city is in the sky, remember?), complains about not receiving a decent wage for his service. All the janitors are black, and the conditions in the back where they work are horrid. A sign in the break room reminds both ethnic groups to “Mind your manners amongst your betters.” Some of the propaganda posters are tagged up, representing the frustration over oppression these people feel.

At one point, a white mother scolds her young son for kissing girls with Irish last names. “It’s bad enough your father employs those ‘potato eaters,’” she says.

This contrast between white high society and the poor working class people of color, Jews, and Irish is powerful to witness from the first-person perspective. Interestingly, by making Dewitt a white character, Irrational gave him a certain agency to see both sides of this story.

“Why is one bathroom for colors and another for whites?” asks Elizabeth, who has been locked up in a tower, separated from society, for her whole life. “It just is,” responds Booker. “Seems like an unnecessary complication,” she concludes. I agree.

This boardwalk area is also where the game introduces the Dimwit & Duke cartoon characters. Levine admits they’re militarized versions of the duo Goofus and Gallant from the Highlights magazines he read when he was little. Dimwit & Duke are essentially propaganda tools to indoctrinate kids into joining the military as staunch nationalists. One poster depicts Duke shooting his popgun at a Jewish caricature with a big nose and curly side burns. 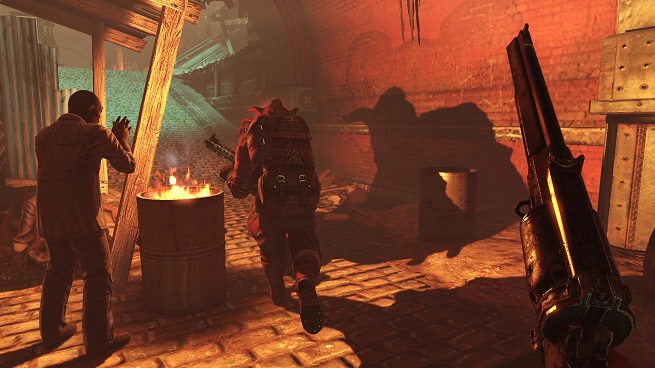 At the Dimwit & Duke amusement park, another poster wants you to “Help fight back the foreign hoarders.” Next to Duke and his rifle are racist depictions of Chinese, Mexican, and black kids. “Expressing the connection between the military and children’s entertainment would be very useful in this society,” Levine said. “It’s also at the same time strangely upsetting. As we had this idea that this would be some sort of theme park structure, we thought, ‘What would a theme park be like in Columbia?’ And we struggled with that for a little while, and then … oh, it occurred to me.”

All of these racialized components in BioShock Infinite are fascinating. They present a nuanced story, albeit in an alternative history, of what it was like to experience the institutionalized racism of the early 20th century.

Men of their times

The people of Columbia worship the nation’s Founding Fathers almost as much as they do the prophet Comstock, and this adds another layer to the narrative. Levine noted how brilliant men like George Washington, Thomas Jefferson, and Benjamin Franklin were …but they also owned slaves and felt that whites were superior to blacks.

He noted if people go back and read the writings of the Founding Fathers, they would be quite appalled at some of the white supremacist language. “It wasn’t because they were bad people, necessarily,” Levine said. “They were men of their times.” As a result, all of these issues around nationalism and (what we now call) racism are warranted. “To really immerse the player in 1912 and have that not even be part of it would be really strange,” he said.

“But then as the story evolved, it became this story about Comstock, Daisy Fitzroy, the Vox Populi , and the founders,” Levine went on. “[Racism] became a larger theme in the game, and a more central theme, but not the overriding theme.”

So, does BioShock Infinite have a vendetta? “There are people who are very worried, people that I like a lot, who are very worried that this is going to be some kind of hack job with an ax to grind,” Levine said. “In terms of the racial issues, it’s pretty clear that I do have a horse in that race, in terms of I’m not a big fan of the racists. But that’s less about exploring the good and bad sides of racism and more just a reflection of the time and how it impacted that era.” 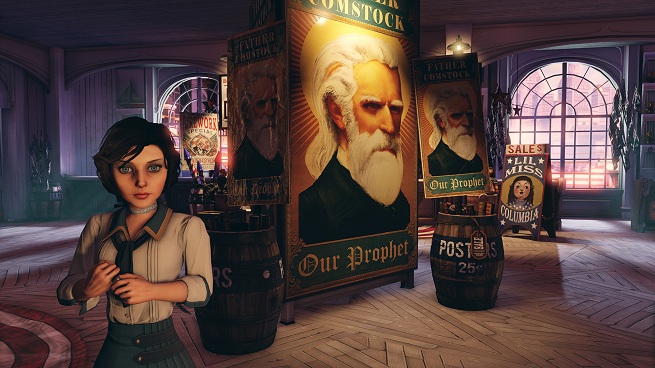 I’m very appreciative that Irrational Games gave the press such a long time to play through BioShock Infinite to really understand where the story and some of the themes are coming from. It allowed us to properly explore Columbia and get a feel for the city’s (American-history inspired) reality. Just as we began to unravel the details behind BioShock Infinite’s intentionally revisionist rendition of the Boxer Rebellion and the Battle of Wounded Knee, the demo came to a close.