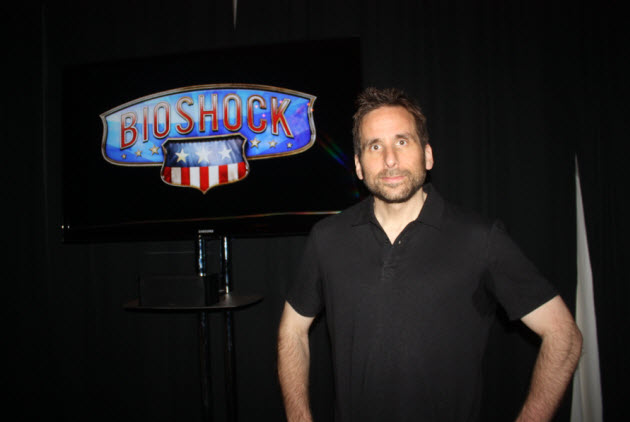 Irrational Games, which has established its reputation as one of the most creative game studios in the industry, is slowly revealing some of the cool innovations in its next major game, BioShock Infinite. Today, the company is revealing more details about the game, which features the ability to swing on a rollercoaster in the sky and fire at enemies below. This game is innovative both in its storytelling and technology, and it is one of the titles that will push the game industry toward high art. 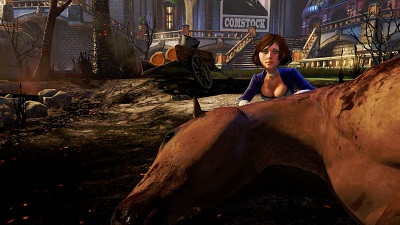 BioShock took the game industry by storm in 2007 when it was released by the 2K Boston (now Irrational Games) division of Take-Two Interactive. The shooter game was set in an underwater utopia-gone-wrong city called Rapture, and it was praised as one of the most original games of its time. The game sold more than 4 million units, generating about $240 million in revenue at retail. Take-Two followed that with BioShock 2, a more derivative sequel that debuted in 2010. I’ve played both games all the way through and thoroughly enjoyed them.

While BioShock 2 was created by a new team called 2K Marin, Ken Levine (pictured), designer of BioShock, moved on to developing something that was more ambitious and creative, leaving behind Rapture and its 1930s style alternate universe for Columbia, another utopian city, which floats in the sky and is the setting for BioShock Infinite. This game (first announced last August) has no release date yet, but it is a big budget title being built by a team of 106 people, said Timothy Gerritsen, director of product development at Irrational Games. The audience for BioShock Infinite could prove to be bigger than the audience for the original hit, giving Take-Two Interactive a steady revenue booster beyond its staple Grand Theft Auto games. Making a steady stream of hit games isn’t easy, as noted by John Riccitiello, CEO of Electronic Arts. 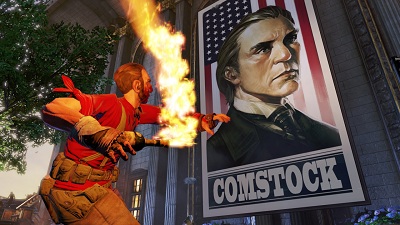 The new game uses first-person shooter combat tactics that were introduced in the first two games. You can fire a retro-fantasy gun with one hand and dispatch magic-like abilities with another hand. In BioShock Infinite, for instance, you can cause hiding enemies to levitate into the sky and then shoot them with your gun. That core game play makes the game fun.

But BioShock Infinite’s combat will be a lot different compared to the earlier games, thanks to the setting of Columbia as an aerial, and not an underwater, experience. Columbia, set in an alternate universe around 1912, is emblematic of an America that was emerging at the time as a jingoistic and imperial nation, led by a group of “founders” who are nativist and ultra-patriotic. Levine said they will be opposed by the “vox populi,” a Marxist-style international movement aimed at destroying the elitist society that the founders created. Each faction pushes the other to excesses.

Everywhere you look in BioShock Infinite, you can see stylistic artistry from the turn of the century as well as some kind of social commentary that evokes a number of historical and literary references. While Levine’s original BioShock was heavily influenced by Ayn Rand’s Atlas Shrugged novel and her objectivist philosophy, Levine says red-white-and-blue colors of Columbia are an expression of Jeffersonian American idealism — a city on a hill. But like so many things that start idealistic, the city’s reality becomes corrupted. 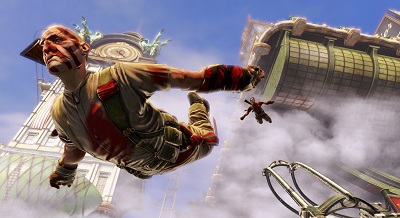 While the character in BioShock was nameless, in the new game the player takes the role of a real character, Booker DeWitt, a former Pinkerton detective agency employee who was too rough for the Pinkertons. He is hired to rescue a girl named Elizabeth, who has been locked Rapunzel-like in a tower in Columbia since she was five years old. When she gets out of the tower, there is a kind of Roman Holiday moment where she gets to explore the city she has never seen.

The problem is that the civil war between the Founders and the Vox Populi is tearing the city apart, even as DeWitt tries to rescue Elizabeth.

“In BioShock, you show up as a player after things fell apart,” Levine said. “With Infinite, we wanted to give you the feeling of being in a city that is tearing itself apart, and you are one of the reasons that is happening.” 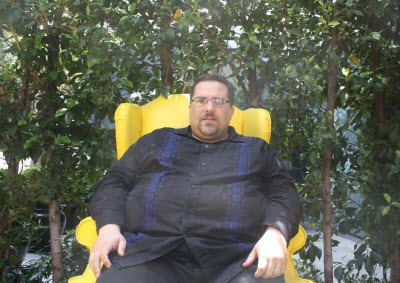 And Elizabeth’s protector, a mechanical guardian beast called “Songbird,” will stop at nothing to take Elizabeth back to the tower. The Songbird has the emotional effect of a jealous ex-husband, showing up relentlessly to take Elizabeth home.

It turns out that Elizabeth has special powers such as the ability to open “tears,” or portals to other dimensions — but she has no idea how to control these powers. The portals make the game a little spooky. When Elizabeth loses control of a tear, it opens a scene with a modern movie theater playing The Revenge of the Jedi (sic).

She augments DeWitt’s abilities with her own so that they can escape from the city that is literally falling from the sky. While BioShock is a lonely experience, this game has dialogue and companionship. She can be like a narrator for the story. The good thing, Levine says, is that Elizabeth can take care of herself and at no time does DeWitt have to hold himself back from combat in order to protect Elizabeth.

During the game, you make interesting choices. DeWitt has to choose, for instance, whether or not to stop an execution. One outcome leads to an all-out combat scene with one of the major factions. In that battle, DeWitt has to take to the skies, hanging onto the rollercoaster-style rails of the Sky-Line system, which is used to connect the different parts of the floating city. DeWitt hangs on to the rail with one hand as he swoops down on the Sky-Line and shoots his machine gun with the other hand. That makes the action fast-moving. DeWitt also has to take on enemies in blimps floating in the sky. As DeWitt moves around the combat space, you get the feeling that anything can happen and that the world isn’t scripted to restrain the gamer from exploring choices and consequences.

I suspect that the “tears” that open up in the game serve more than a mere tactical purpose. Gerritsen said the game will explore the theories of Albert Einstein and Werner Heisenberg — both of whom unhinged the world from certainty as they discovered the laws of modern physics. Gerritsen says there are more layers to the game — including the fact there are non-human adversaries — still to be revealed.

As far as technology goes, the original BioShock used the Unreal Engine 2.5 to render the cool indoor and underwater scenes. But the new engine capitalizes on the Unreal Engine 3, with plenty of custom modifications that allow Irrational’s designers to create fast-action combat both indoors and in the clouds. In the prior games, you might see four enemies moving around at once. But in BioShock Infinite, the number of enemies attacking you is much greater than before, Gerritsen said. That serves to raise the stakes in the story. DeWitt and Elizabeth have to overcome huge odds. Their relationship grows as they endure the worst possible experiences and survive the crucible together.