Greg Zeschuk, the retired cofounder of BioWare, spent a lot of time keeping kids and adults on the couch, playing video games like Dragon Age and Mass Effect. But now he’s making amends for that with Biba, a Vancouver, Canada-based startup that he is helping to run.

Biba and playground equipment maker PlayPower are teaming up to create augmented reality mobile games that make kids engage in real-world activities, so they can get more exercise and outdoor play. Biba has created an app that gets kids to run around, and it works with a special code embedded in PlayPower’s upcoming playground equipment. With the app, kids can engage in an activity with a parent’s smartphone, while the parent holds the smartphone and acts as referee.

The startup is the first game-related company for Zeschuk since he retired in 2012 from BioWare, which is now a part of Electronic Arts. At last week’s Game Developers Conference in San Francisco, I caught up with Zeschuk, who is chairman of Biba; Biba president Matt Toner; Nis Borjin, chief product designer at Biba; and Lynne Vandeveer, chief marketing officer at PlayPower. 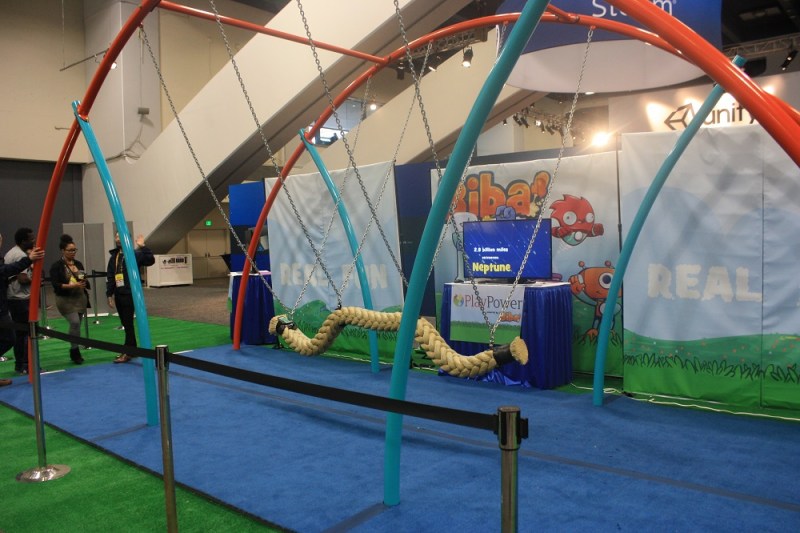 Above: Power Play adorned its Biba display with a walkable rope bridge.

GamesBeat: From the video, I wasn’t sure how you were making these play structures fit into what you were doing.

Greg Zeschuk: The gist of it, the most fundamental thing of all — after our career of putting people on their butts for hundreds of hours playing games, I’m trying to pay back the world by making games that make kids go outside. We’re trying to create a system with mobile phones, which kids are playing with, to get them out there playing.

Nils Bojin: What we have here exemplifies the philosophy and long-term aims of what we’d like to do. We’re marrying PlayPower’s technology with the stuff that we’ve done in the game here. It has an accelerometer on it. What we’re doing right now is we have a smartphone app to get kids, ages three to nine, more active out on playgrounds. We’re using ready at hand technologies — just the phone — that don’t keep the device in the kid’s hands. Largely because we want the child to be safe and we want the device to be safe too.

The objective is to reorient kids from their current screen-based habits. Kids are spending seven or eight hours with a screen each day, and their activity is down drastically. Once they hit school years, about five and up, we’re looking at only seven percent of those kids getting the minimum recommended time of 60 minutes a day, which is pretty low.

When we install PlayPower, they can take their phone out, tag in to PlayPower, and it’ll immediately know what’s present in terms of playground equipment. All the different pieces of equipment will tag in as well, the ones that are interacting with the games on the platform. We’ll pair that with location-based services – weather, the time of year, what day it is, holidays, things like that. It’ll generate a list of games kids and parents can play based on those variables.

GamesBeat: What’s the premise of the narrative?

Bojin: Biba’s premise is that these little robots have been crashing from space to earth over the last several decades. Playgrounds are the wreckage of their spaceships. When kids and parents visit playgrounds, kids are introduced to these marooned robots who are stranded there and encouraged to play with them and help them get back home.

We have a game called Biba Racer that exemplifies that. The premise here is that the child is the car and they have to complete a lap around the race track. The parent’s holding the phone, always. The accelerometer can tell when the ignition should start and then he’s going to go and come back around. The embodied play aspect has him moving as the player character for the game, but the phone also embodies a tool or a thing, and the child comes back to interface with the phone.

Every time he comes back and tags in, well, he’s a car and he needs to be fixed. The car has to get refilled with fuel, reinflate the tires, change the wheels, tune up with the speed ratchet, things like that. They’re highly interactive, but also expected from a scenario where, “I am this thing and this is what I do.”

In a series of games we present these premises for kids to latch on to and then embody and enact. The phone supports them with these very toy-like activities. We call it something like Simon Says meets Warioworld.