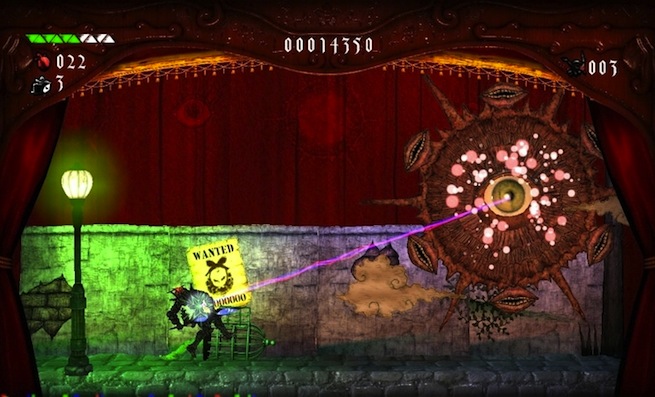 Goichi Suda owes me a new controller. The avant-garde game designer (who also goes by “Suda51”) is known for the distinctive style and offbeat humor he brings into almost every project he touches, such as killer7 and No More Heroes. But after playing his latest game, I now associate him with long nights of yelling at the TV as I died in Black Knight Sword for the hundredth time.

Out now on Xbox Live Arcade (800 Microsoft Points) and PlayStation Network ($9.99), Black Knight Sword is the second title to come from the partnership between Suda’s Grasshopper Manufacture and Digital Reality — the first was the shoot-em-up Sine Mora earlier this year. Black Knight Sword puts a twist on the traditional damsel-in-distress fairy tale, where instead of saving the princess, you must fight her and her legion of walking heads, gargantuan guardians, and other creepy looking foes.

It’s a combat-focused platformer at its core, with the developers describing it as a “throwback to the 16-bit era with simple, yet addictive gameplay.” In other words, the game is pretty damn hard.

All the world’s a stage
Black Knight Sword captures your attention even before you begin, giving you a front-row seat to its grand play. Hand-drawn curtains part way to reveal a small stage while an offscreen orchestra tunes its instruments, and you can hear the quiet voices of the nonexistent audience as they settle into their seats. But you can tell something is amiss as soon as the narrator speaks, informing you of the weird tale you’re about to witness.

After you take up your black armor and your magic sword, you venture into the game’s modern 2D world of seedy alleyways, sewers, forests, and other cities that normally don’t belong in a fairy tale. Along with the red curtains in the foreground, the background is stationary and only changes scenery as you plunge deeper into its five stages. It’s gorgeous to look at, and the sights and sounds (such as the audience booing if you die or quit) really make it feel like you’re playing a part in this unusual puppet show.

Odd sense of humor
Despite its tone, not everything is bleak and depressing in Black Knight Sword. Enemy design often astounds and confuses you with their mishmash of human body parts and machines. And you can find extra hearts (the in-game currency) or skulls that heal you inside of giant microwaves. Even the friendly folk, such as the one-legged metal cages that think they belong in a jazz band with their impromptu scats, are bizarrely adorable.

Rallying from behind
Unless you play on the slightly more forgiving Easy mode (I played on Normal), you’ll die a lot in Black Knight Sword — you receive a Trophy/Achievement called “Are you really the hero?” if you hit the Game Over screen at least 50 times. I spent most of my time with little to no health, occasionally refilling it at various in-game shops. You can choose to restart a level from the beginning if you’re low on health and out of lives (giving you three more to use), but I was too stubborn, and had trudged too far, to do that.

The most satisfying part, however, is the few precious moments of making a comeback at the last minute. Maybe you just narrowly avoided that fireball in time or spammed the attack button fast enough to kill the monster before it could get up, but whatever you did, you’ll feel like a god … at least until the next end-of-level boss smashes your face in. 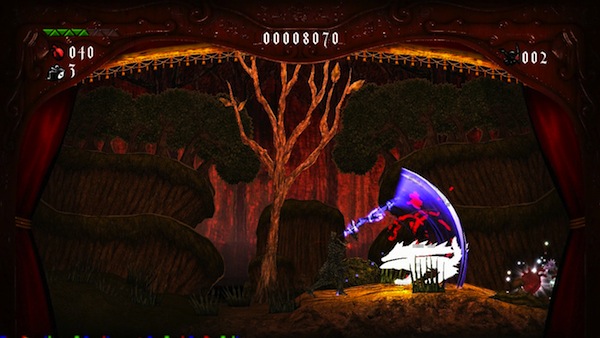 Simple combat
While the sword you wield looks cool, and you have the power of a spirit called the Black Hellebore, the combat is dreadfully boring. Sure, your sword gains new abilities after completing each stage, and you can upgrade your magic attacks by using hearts. But they’re too time-consuming to charge up or, in the case of magic, you’re given a very limited amount to use before you have to buy more. So you’ll be mashing your basic stab attack in most combat situations.

Recurring boss fights
You know those boss fights I keep mentioning? Well, you’ll have to fight them not just once, but twice. That’s not even counting the countless attempts and long hours (in my experience) it’ll take to defeat them in their first encounter. One particularly nasty fight that I hated transitions into a full-blown bullet-hell shooter: It took me an entire afternoon, with breaks in between, to successfully dodge the hundreds of bullets on screen and kill the creature spitting them out. I’ve never cursed so much at a game in my life.

So imagine my delight when I saw this same boss come up again before the end of the game. They do have less health the second time around, but it doesn’t make it any less infuriating. It sucked up any joy I had for Black Knight Sword and turned it into pure hatred. Isn’t this kind of thing illegal?

I suppose I should thank these fights for doing one thing right, because they also revealed that the lives system is useless. Rather than give up and start a level over (which also resets any upgrades you might have had), all you have to do is make sure you save your game at every checkpoint. If you die, just quit to the main menu and load up your file — if you still had lives, you’ll just start from the last checkpoint anyway.

Framerate problems
I’m not sure if this is true for the Xbox Live Arcade version, but on PSN, Black Knight Sword’s framerate frequently dipped into slideshow territory for a second or two. The most frustrating part about this is it usually happened during critical jumps or attacks — the game is hard enough as it is without these technical hiccups. 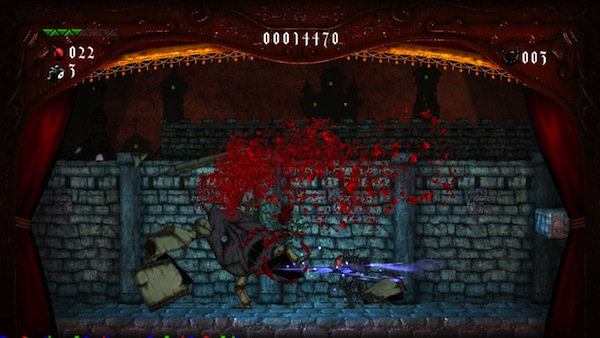 If you seek to conquer Black Knight Sword’s challenges, I suggest thinking real hard before you buy it. It’s a good-looking game with a unique style that screams Goichi Suda’s name, but the gameplay is rarely rewarding. So much is working against you that you feel like the only reason you’re making any progress at all is because of pure luck rather than skill.

Black Knight Sword released on Dec. 11 for PlayStation Network at $9.99 and Dec. 12 for Xbox Live Arcade at 800 Microsoft Points. The publisher provided GamesBeat with a PSN code for the purpose of this review.