Call of Duty: Black Ops III commanded the lead position in video games on the start of the holiday season on Nov. 27, according to a marketing study by researcher Infoscout. And of the console brands, Sony’s PlayStation also edged out Microsoft and Nintendo on Black Friday among millennials. InfoScout tracks purchases made by a network of 300,000 users over three mobile apps. The study was based on 250,000 receipts from those users on Thanksgiving night and Black Friday.

Infoscout also said it was no surprise that individual game sales came out on top over console purchases, as the consoles have been out for a couple of years. Games accounted for 44.2 percent of such sales on Black Friday, followed by 37.1 percent for console bundles, 10.7 percent for consoles, 4.6 percent for accessories, and 3.4 percent for memberships. The top console bundle pick this year was the Xbox One 500GB bundle with Gears of War (and a $60 gift card), which Target discounted to $300 (from $350). 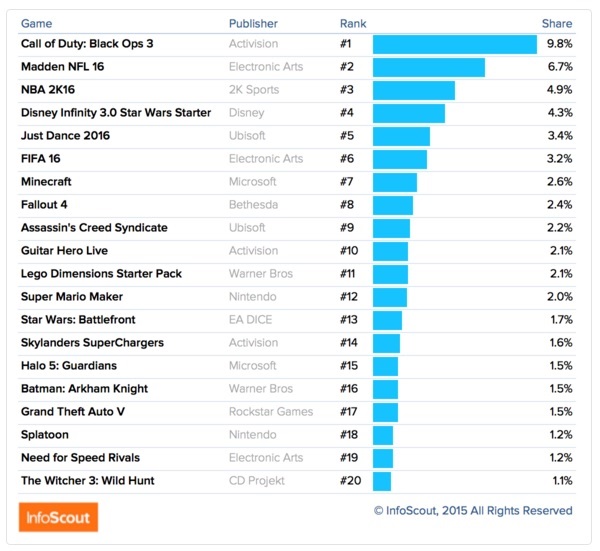 Above: Call of Duty: Black Ops III was the top Black Friday game in sales.

Of the console makers, the marketing study said that PlayStation brands won in the 18 to 35 age group, while Microsoft won in the older 36 to 55 age group in the U.S.