Blade is delivering its Shadow cloud gaming service that turns ordinary machines into gaming powerhouses with its modern approach to a problem that industry pioneers tried to solve a decade ago. The difference between now and a decade ago, Blade contends, is that cloud gaming actually works now.

And if it works, then the long-held promise of democratizing high-end gaming by playing high-performance games across any hardware is within striking distance.

France-based Blade is launching the service regionally today, and it expects to cover all of North America within three months. The service goes live today in the West in California, Idaho, Oregon, and Nevada. It will be available in 16 additional East Coast states on August 9th, and then the whole continental U.S. will have the service by October.

The service allows you play high-end Windows 10 PC games on ordinary devices, such as a mainstream computer, an older PC, a big-screen smart TV, a laptop, a Mac, a tablet, or even a smartphone. I tried it out, playing games such as Fortnite, Ghost Recon: Wildlands, and Project Cars 2 on a number of those devices. It was stunning to switch immediately from playing Ghost Recon Wildlands on a smartphone to a playing on a giant TV. The graphics looked flawless, and that’s why Blade believes it can charge $35 a month for the Shadow service.

Blade launched the service in France in November 2017 and then did a soft launch in California earlier this year to make sure that its platform and the accompany data center infrastructure can handle the load. Asher Kagan, CEO and founder, believes that Blade’s technology will be able to handle the load as more people sign up for the service. 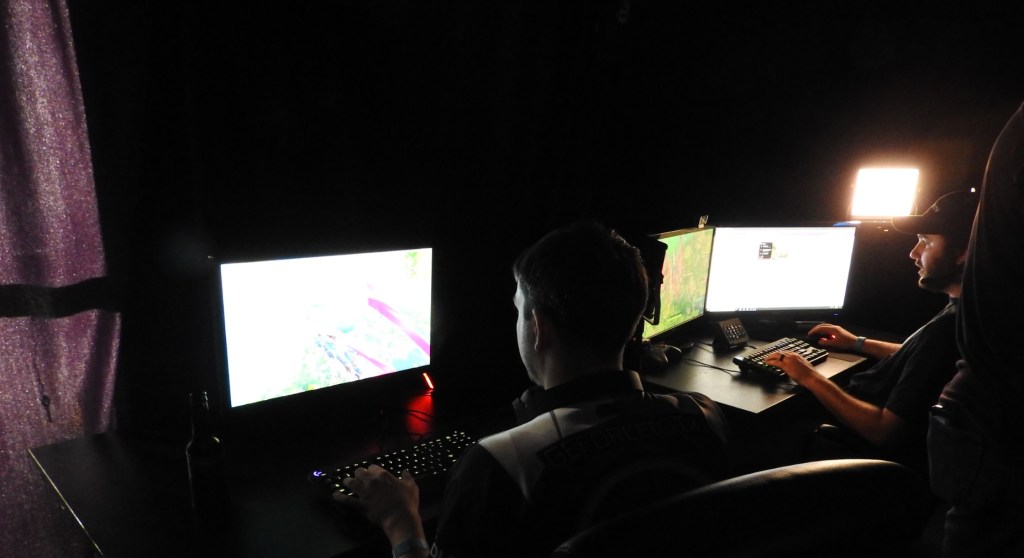 Above: Gamers try out the Blade Shadow service on August 2 at a party.

“We want to take the friction out of gaming,” Kagan said. “You don’t want barriers between you and your games.”

Shadow works on any Internet-connected device with a screen, turning it into a powerful, full-featured and always-upgraded computer, optimized for dedicated gamers. Kagan said at an opening party on Thursday night that Shadow will unshackle players from the curse — often worn as a badge of honor — of having to buy a $2,000 gaming PC every few years to be able to play the latest games. You can buy a bunch of great inexpensive games on the Steam game store, but you can’t play them without an expensive PC, Kagan said.

These days, gamers — particularly working people or busy parents — need to be able to play games anywhere at the time when they happen to have time to play. They value freedom and flexibility to play their favorite games without interruption. Shadow offers unlimited play and access to your whole library. You can also easily cross platforms, like playing PC games on a Mac.

Rivals such as Parsec and LiquidSky are also tapping the power of better infrastructure to deliver cloud-gaming services. But Kagan said, “We’re the only ones who will deliver cloud gaming at the right speed on any device.”

Blade is also revealing its brand new “Shadow Beyond” app, available across every smart device. Shadow Beyond is the best way to interact with all the content on any screen. The free add-on displays commonly used applications by category — gaming, videos, photos — so users don’t have to navigate the traditional computer desktop experience on smaller screens. Currently in beta, Shadow Beyond will soon be available for download on Google Play and in the Apple App Store.

Additionally, Shadow now offers extra storage, with the option of 1 terabyte of high-speed storage for a monthly fee of $10 which ties back in to the company’s vision: gaming without compromise. That means you won’t have to keep deleting older games as you run out of space for newer games. You’ll also be able to access your computer files anywhere you can log in. 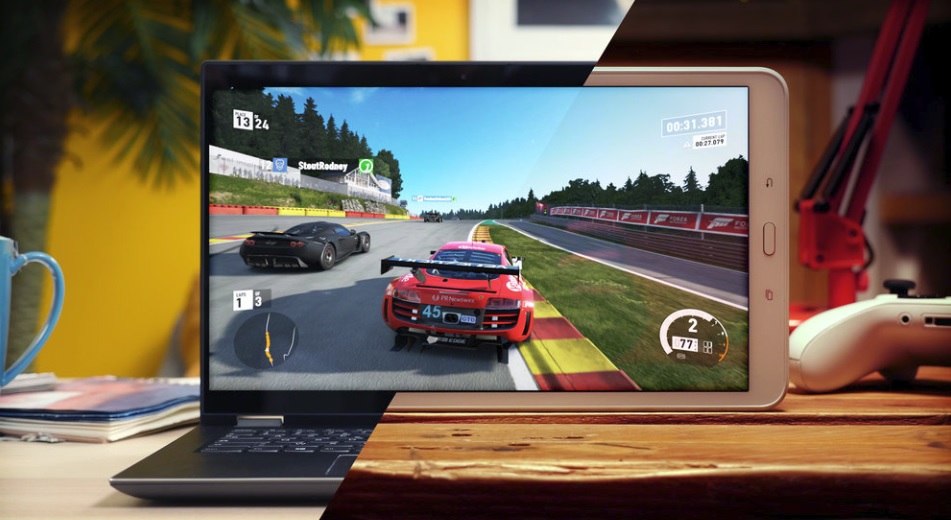 Above: Play the same high-end PC game on a laptop or a tablet.

OnLive promised a similar revolution a decade ago, but its solution was expensive and required a lot of engineering work. The company ran out of money, was taken over by investors, and was eventually shut down. Sony, which operates the PlayStation Now cloud gaming service, bought OnLive’s assets. With Shadow, Blade is promising similar things such as high performance, cross-platform play, low latency, perfect graphic rendering, and data security — without the barrier of high upfront costs of expensive gaming computers.

The service is expensive at $35 a month. That’s like buying a $2,000 PC and paying for it over five years. But at the end of the five years in this case, with Shadow, you would still have access to top-performance computing power.

“With Shadow, your computer always stays up to date,” Kagan said.

At the outset, Shadow will guarantee Nvidia graphics running at 1080p at 144 hertz, or 4K (not upscaled) at 60 hertz, or 60 frames per second. It also offers eight dedicated threads on an Intel processor comparable to a high-end gaming PC powered by a Core i7 processor, 12 gigabytes of main memory, and 256 gigabytes of storage space. 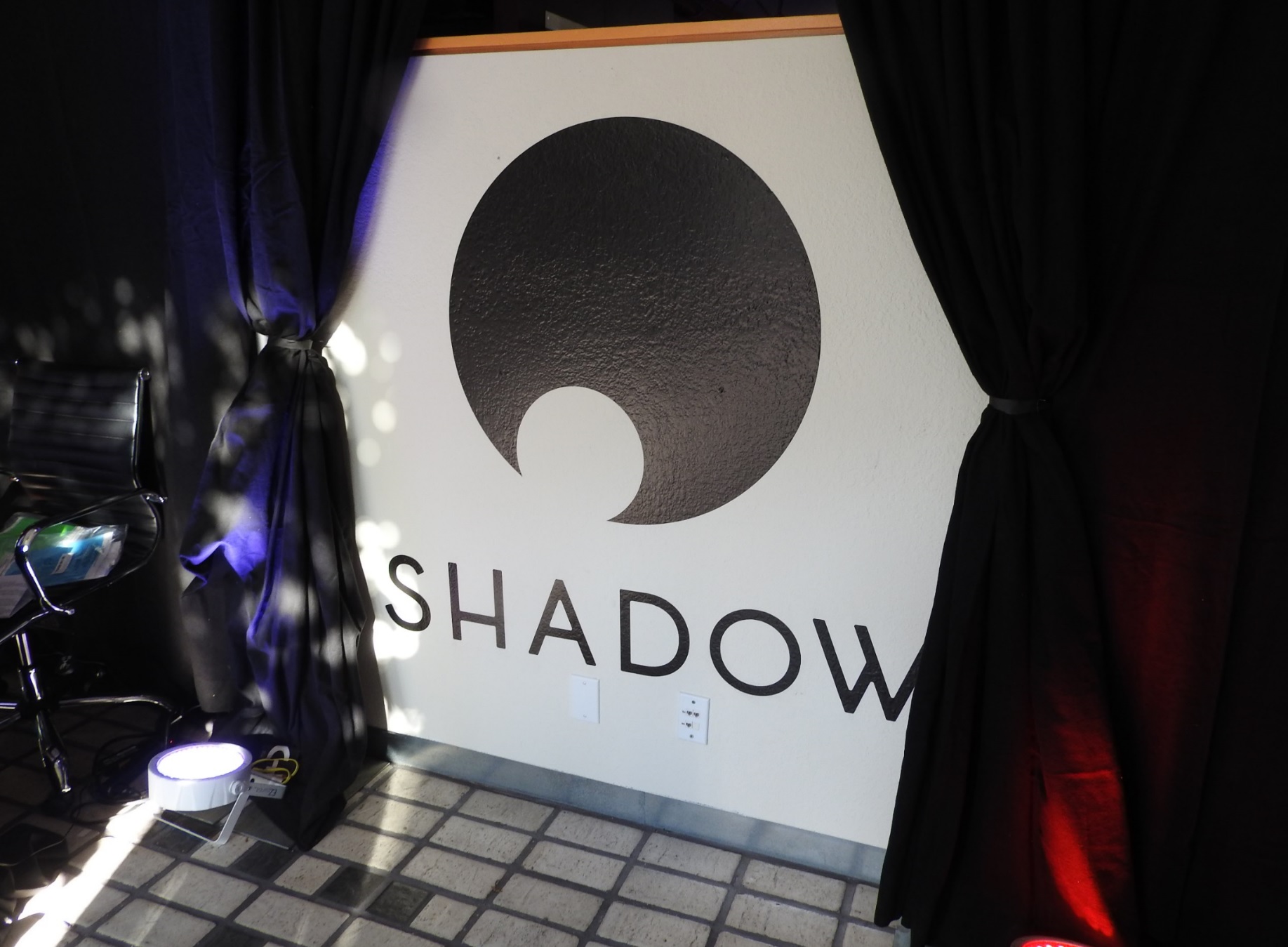 Computer monitors are also faster at displaying images. Blade encodes the image and displays it on a just-in-time basis so that the users don’t notice a delay. In the case of cloud gaming, latency, or the delay between when you do something, like pressing a key on a keyboard, and when the action appears in the game or on the screen. Blade is working with peripheral companies to reduce the latency introduced by input devices such as controllers and keyboards.

But Kagan said that the company dedicates one powerful graphics processing unit (GPU) server for every customer. That’s more expensive than other solutions, which tried to subdivide servers so they could serve many users. But Kagan said it will enable Blade to handle peak performance demands and ensure great quality for every gamer.

As with other cloud solutions, the server runs the game in the data center. When the user does something with a keyboard or controller, the interaction is sent to the server, which computes the input, and then sends the result as a video down to the player’s machine. It goes directly to the user’s display, whether that’s a smartphone display or a big-screen smart TV or a desktop monitor.

Kagan and his cofounders developed this technology and founded Blade in France in 2015, and it has raised more than 60 million euros, or roughly $69 million, to date. The company has more than 160 employees in Paris and Palo Alto, California.

Michael Fan, who joined the company a short while ago as chief strategy officer, said in an interview he was “traumatized” by OnLive and its first cloud gaming service.

“I tested Shadow at home and couldn’t believe it worked,” Fan said. “I canceled my plans and signed up to work. What we’re doing is serving consumers. We take their feedback and listen to them.”

Blade has a number of partners. It is working with Logitech to help ensure that peripherals work at high speeds with the Shadow service.

Ujesh Desai, vice president of gaming at Logitech, said at the Thursday event that he played the Shadow service and was impressed.

“To be able to play Tomb Raider at the highest resolution on a very old computer, and walk over to play it on the TV and pick it up at the same place on a controller, I thought you have to be kidding me,” he said. “Then I walked over and played it on a phone. We believe in cloud gaming, in how it can democratize gaming, and I like what they’ve done here. Our goal is to make sure our gear plays flawlessly with the Shadow platform.”

Michael Fan, chief strategy officer at Blade, said in an interview that most USB-connected gaming peripherals will work with the Shadow and its Shadow Box connector box. I played Project Cars 2 using a Logitech gaming wheel at Blade’s office. The computer was getting broadband service at 800 megabits a second downstream and 106 megabits a second upstream.

Kagan said he realizes the challenge of convincing consumers, who have been burned before, to give cloud gaming a try again. In a few short months, gamers across the nation will be able to see if Shadow really lives up to its promise when it serves large numbers of people all over the place. 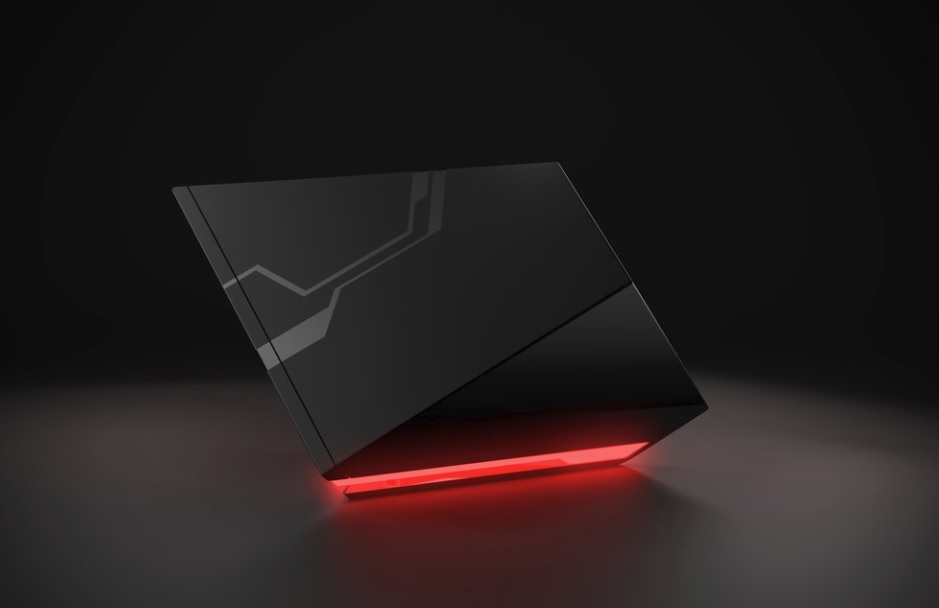 Above: Blade’s box is simply meant to connect a device to peripherals. It’s not a computer.

Blade is also working with esports venue Thunder Gaming, whose esports venue in Long Beach, California, will serve as a beta-testing site for using cloud gaming in competitive tournaments.

As part of the partnership, Shadow accounts will be activated at Thunder Gaming for guests of the facility to experience the ease of use and the power of Shadow technology to deliver the highest level of computing for gaming.

“We are pleased to partner with Shadow by Blade since they share our passion for delivering the highest technology and the fastest computing and ease of use for amateur gamers and pro players alike,” said Christian Bishop, CEO of Thunder Gaming, in a statement.

Fan said, “We want to work with some of the best cyberathletes in the world and convince them to use Shadow. That should convince people that it really works.”