Update: The initial sales of the two Deanmau5 NFTs sold for $240,000, with $160,000 selling the first five minutes when the Professor Meowingtons Blanko sold out, and the remainder sold in under 20 minutes when the deadmau5 helmet sold out.

This is just the beginning of these NFTs’ journeys: Each time the NFTs are sold by players in the marketplace, the original artist or creator will receive a cut of the sale. And Mythical is already seeing some players turn a profit in peer-to-peer sales on the marketplace of both the deadmau5 Blanko and helmet, while  still in a closed alpha. Mythical will be opening up the marketplace beta later this summer and expects to see even more activity at that point.

NFTs have exploded in applications such as art, sports collectibles, and music. NBA Top Shot (a digital take on collectible basketball cards) is one example. Built by Dapper Labs, NBA Top Shot has surpassed $700 million in sales, just six months after going public. And an NFT digital collage by the artist Beeple sold at Christie’s for $69.3 million. Gaming has a couple of new unicorns, or startups valued at $1 billion, in Animoca Brands and Forte. NFTs are now selling at a rate of $23 million a week, though the initial hype around NFTs is dying down.

Some people will scoff at NFTs as a hype train. But it enabled Mythical Games to raise $75 million in venture capital funding. 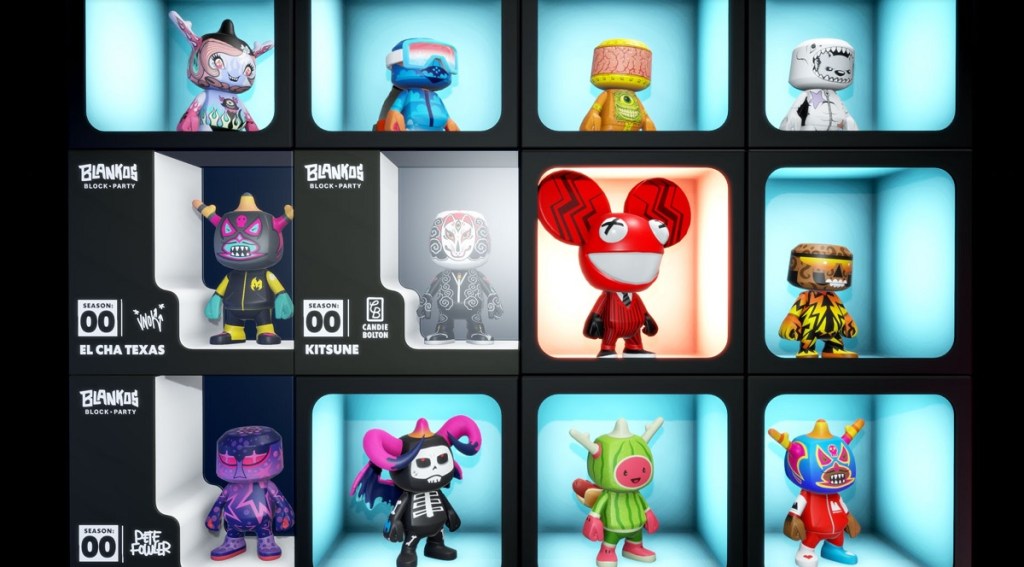 Above: Deadmau5 helmet in the marketplace for Blankos Block Party.

The NFT drop will include the Deadmau5 helmet as a digital accessory for any Blanko, or character in the game. Fans can tune in to Twitch this afternoon as Deadmau5 streams Blankos Block Party on twitch.tv/deadmau5 for a launch celebration of this collaboration. Fans can also join him in player-created minigames to show off their own Deadmau5 collectibles.

Digital items in Blankos Block Party, like the Professor Meowingtons Blanko and Deadmau5 helmet, are playable NFTs that have the same utility as any skin or accessory you might buy or earn in another game, but unlike most games, in Blankos players actually own what they buy and can sell their items for cash when they no longer want or need them, unlocking the real-world value of their time and money spent in game, through blockchain technology.

Blankos Block Party and the Mythical Marketplace are built on a private EOSIO blockchain using a “proof of authority” model that is more environmentally friendly and sustainable than the “proof of work” model (neither the game nor Blankos NFTs use or require any crypto mining). Mythical partners with artists, creators and brands to bring these curated NFTs into the game, ensuring their partners are not only credited for their designs, but that they’re able to earn ongoing commissions for their work, even in secondary sales.

The game world of Blankos Block Party is styled like a giant block party, where players can compete in and explore a variety of gameplay types, including racing, shooting, tag, collection, and more, across minigames built by Mythical and by players.