Bling has raised seed funding to enable game developers to give Bitcoin rewards to players who engage with games.

The Irvine, California-based Bling’s vision is to make money fun by providing an entertaining and risk-free way for first-time crypto users to enter the market by playing simple games that reward them with points that can be converted into Bitcoin.

The round included a strategic investment by Coinbase Ventures, which, when the time comes, could be a reliable partner for crypto custody and exchange. Previously, the company raised money from pre-seed investors such as Wavemaker Genesis, Gumi Cryptos Capital, and Blocktower Capital.

Bling isn’t disclosing the amount of money they raised from Coinbase Ventures. But it was a good reward for a company that had to do a major pivot and found itself giving out Bitcoin to players who are curious about earning money playing games. It’s another example of what I call the Leisure Economy, where we all get paid to play games.

“I think one reason why we’ve been so successful is because we’ve made it so easy, like you’re no longer risking your money,” Wan said. “It’s risk free. It’s like a fun experience that you’re you’re earning some Bitcoin, which you don’t really know how to get into it.” 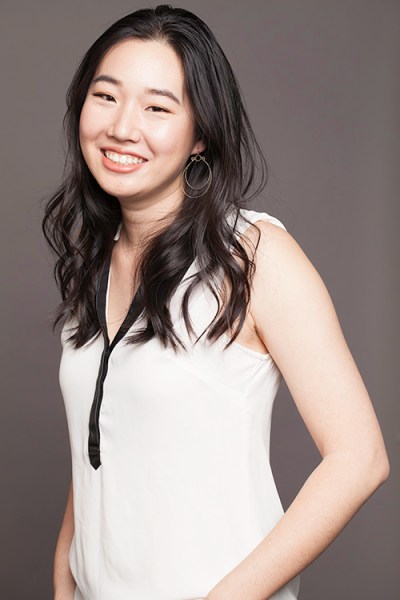 Above: Amy Wan is the CEO of Bling.

The company is the brainchild of Wan, a fintech veteran and former securities attorney; and Dan Rice, a veteran software engineer and blockchain and gaming expert. In 2017, Wan was getting a lot of calls from crypto entrepreneurs who wanted to do initial coin offerings (ICOs), and they were later deemed illegal by the Securities & Exchange Commission. She stayed away from that. And that was good.

Wan happened to get pregnant with her first child, but she still had an idea for an opportunity in smart contracts, which were automated programmable elements on the Ethereum blockchain.

“I was like, ‘What do I have left to lose? Right.’ I’m a solo female pregnant minority founder so I might as well just give it a go,” she said in an interview with GamesBeat. “I reached out to the person who is now my CTO, Dan, and we discussed it. And we found out that we had very similar views on it. So originally, we started off as a dispute-resolution infrastructure company for smart contracts.”

In mid-2018, they raised a pre-seed round of funding that included Miko Matsumura, general partner at Gumi Cryptos Capital. Wan discovered that the initial product didn’t fit in the market, as the creators of ICOs were often oblivious to risks and other enterprises didn’t understand smart contracts.

The biggest of pivots 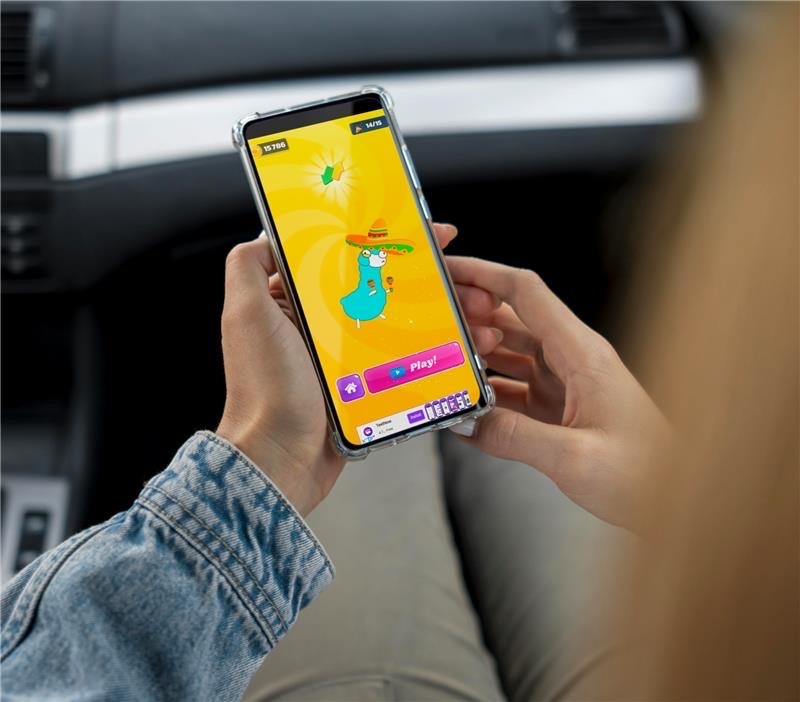 “We had to sit down and think about closing the business,” Wan said. “Do we actually want to pivot and do something else? So we ended up launching a bunch of different experiments.”

Wan tried to figure out a security token. And Rice pursued an idea around games. They told Matsumura that they were pivoting from legal infrastructure into games and he wasn’t thrilled at first.

“That was just as the crypto bucket was falling. And we spent a good summer and fall trying to make it work. And then just realize it’s way too much of an uphill battle,” Wan said. “It was early winter 2018 when we realized we needed to actually do something else. Dan has experience in entertainment and gaming companies, as well as fintech. So he went off on the idea that would ultimately work.”

In 2019, they developed a game called Bitcoin Blast, which was a simple match-3 game where players earned points that they could turn into Bitcoin. Bling developed a platform that consists of a proprietary software development kit (SDK) that offers game developers a Bitcoin rewards system, fraud detection, and user value detection. It never spent a cent on marketing. And it started to take off. Then Matsumura became much more engaged.

“Since the pivot was such a radical departure, we were naturally concerned,” Matsumura said. “But Amy was ruthlessly methodical about testing ideas and quickly churning through things that didn’t work.”

Other competitors set high bars, required PayPal cash outs, and paid in regular U.S. dollars. High transaction fees meant that it took a lot of time before people could cash out. But Bling let players cash out on day one. By using Coinbase and Bitcoin as the base system, they were able to do very small microtransactions with no transaction fees.

“And today, we have over 5 million users,” Wan said. “We’re doing over $5 million in annualized revenue. We’ve got six games on Android and one on iOS. And this is kind of a bad word in Silicon Valley, but we’re profitable. We’re having trouble spending that money faster than we’re making it. And we just got an investment from Coinbase. And I’m pregnant again. So I guess every time I get pregnant, I get to raise money.” 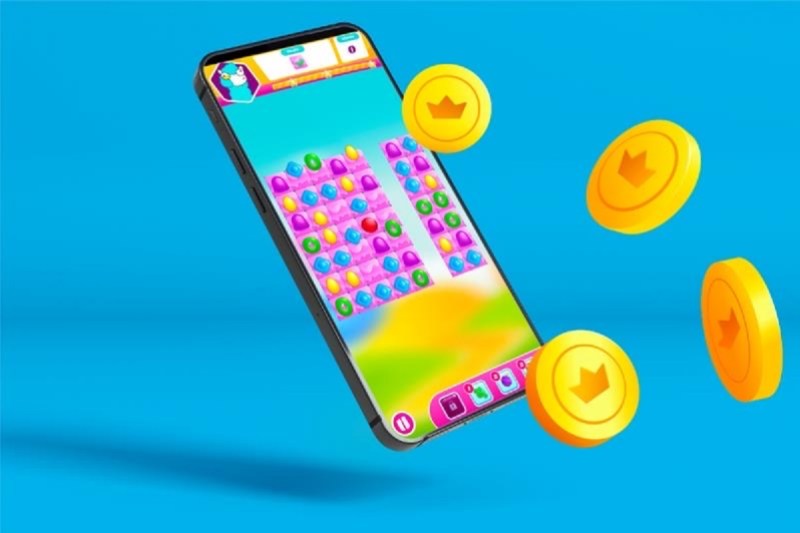 Above: Bling has simple games like the match-3 title Bitcoin Blast.

The titles are simple games including Sweet Bitcoin, Bitcoin Pop, Bitcoin Blocks, Bitcoin Solitaire, and Bitcoin Food Fight. Those games are on Android. And Bitcoin Blast is on both iOS and Android. I played Bitcoin Blast. As I started, it played an ad. Then I played a round of the match-3 game, where I had to match rows of Bitcoin coins. As I won each match, I sat through video ads.

At the end of a handful of games, I had 15,980 Bling points. I was ready to collect my Bitcoin. I pressed the “cash out” button, and it told me I had a very small amount. It amounted to a few “satoshis.” A satoshi is one hundred-millionths of a Bitcoin. I cashed out. Here, you have the option of sending to a Coinbase account by typing in the email, or creating a brand new Coinbase account. It told me I would see the Bitcoin show up in my account within 24 to 48 hours.

“We have developed a very unique audience of people who have demonstrated that they’re curious [about crypto], but they’re never going to spend 50 hours to really get into and follow the ecosystem,” said Wan in an interview with GamesBeat. “And so I believe we have to build products for them, right. Coinbase, for us, is a very good partner because in many ways they have done the same thing, although for people who are much more speculative. We have a much more lay audience. Maybe they’re not even thinking about this as an investment.”

The Bling platform has seen tremendous organic growth in less than two years, boasting a million monthly active users. The platform allows those new to cryptocurrency to own their first Bitcoin with zero risk, making it attractive to crypto-curious audiences. In fact, some 70% of its users report never having previously opened a Coinbase account.

“We have found that our player base is literally the crypto curious,” Wan said. “Many of our users have never owned any crypto before, or this is their first exposure to Bitcoin or crypto.”

Above: Bling has 11 employees.

Matsumura said that Bling has been one of the greatest stories of entrepreneurship he has ever seen, and this financing round brings additional seasoned and strategic investors to the growth and momentum at Bling.

“When we first took the pitch, we were impressed by the rational and clear-thinking Amy Wan as a first-time venture-backed CEO,” Matsumura said. “She proved herself by making a dramatic pivot from smart contract infrastructure to casual mobile gaming, a completely different domain.”

This could go two ways. To scale users and really take on more of a platform infrastructure play, Bling developed an internal Bling SDK. Other developers can use it and plug it into their games, and it provides that developer with basically a Bitcoin reward system, fraud detection, and user value detection. Those publishers can then get a lot of users and monetization structure overnight.

Bling also has an opportunity to take those crypto-curious players and get them to auto-invest a dollar into Bitcoin every month or whatever. And that could help them earn cryptocurrency over time. Other companies like Acorn have done that, and that kind of business can make money in various ways.

With the new round of money, the company will expand its staff of 11 to more people. And it will start testing paid user acquisition. Most of the staff is based near Irvine in Orange County, but it will likely adopt a hybrid remote work and office work routine.

It’s tough hiring engineers now because most of them want to work remotely and they’re asking for big salaries, Wan said.

“We’re hearing a lot of interesting stories and trying to figure out how we’re gonna deal with this,” she said. “I want to let people do a lot more remote stuff. But at the same time, I believe that companies that are not able to get their staff to go into the office might end up losing in terms of competitiveness.”

As for things like nonfungible tokens, or NFTs, Wan knows a lot about fintech. But she’s not ready to dive into them yet while the regulatory picture is unclear.

“I think the ecosystem concentrates a lot on how technology is so awesome. And they forget a lot of real-world practical things like user behavior or laws and regulations,” Wan said. “I think NFT’s have a future. I think tokens have a future. But the way that they are being utilized right now to me looks much more like a security.”