Today marks the beginning of a new experiment for Blizzard Entertainment in their massively multiplayer role-playing game World of Warcraft: five-player raiding.

Warcraft dungeons have required five players since the game began, but these days, those dungeons’ design largely attempts to get participants in and out in well under an hour. They’re simple, designed at easier difficulties to be completed by groups made up of total strangers, and offer some of the easiest group content in the game.

But in Patch 7.1, which launches today, Blizzard brings back one of the best-designed larger-group raid dungeons as a five-player experience.

Return to Karazhan contains some of the old raid bosses (retooled and much prettier to look at), but it also includes new content. Altogether, it offers groups of five players to tackle eight bosses, in an experience that’s designed to be just as tricky as raiding and to take just as long. Progress in Karazhan will be measured in hours, not minutes.

“We think it’s possible that many groups will do this over the course of couple of nights,” World of Warcraft game director Ion Hazzikostas said. “You’ll go in the way you did back when Karazhan opened, with friends, kill three or so bosses, wipe on the fourth and feel like you’re getting close, but you’ve been there for a couple of hours, so you call it a night come back later in the week and pick up where you left off.

“In a sense, it’s an experiment with a new type of content with regard to that player size. We built it as a five-player raid.”

A new form for an old favorite 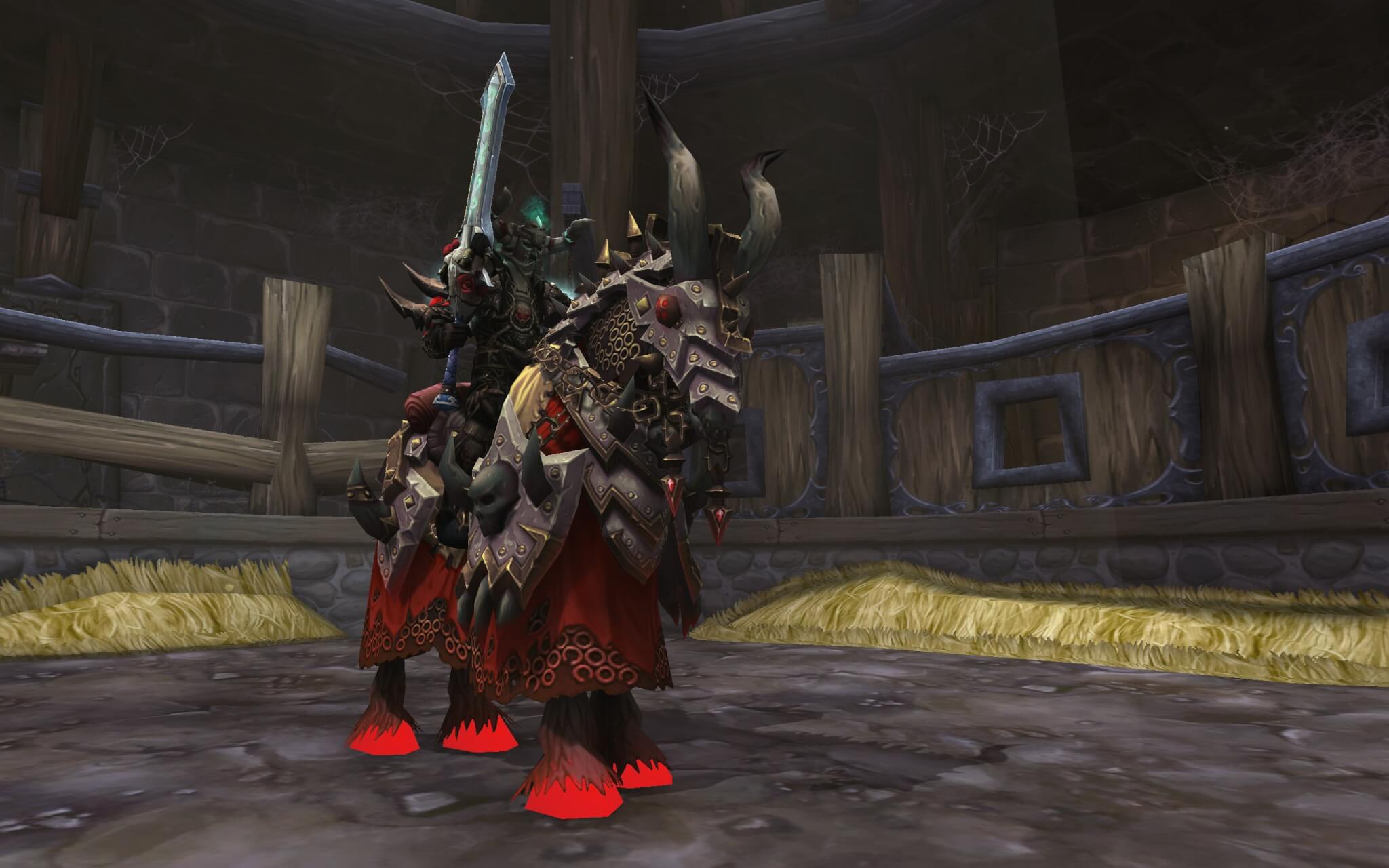 Above: Attumen the Huntsman in the new 5-man version of Karazhan.

In Return to Karazhan, you go back to Medivh’s tower to battle the Legion’s demons. You’ll start at the door that used to be the shortcut into the raid; the front door still leads to the old 10-man version. The first few bosses are familiar, as the Legion features up top. But to get there, you need a key, and so you descend through several bosses to get it from Medivh’s steward, Moroes.

The Opera, which used to offer kitschy favorites based on the Big Bag Wolf, the Wizard of Oz, and Romeo and Juliet, now has a new set of challenges: Wikket tells the Oz story from the flying’ monkey’s perspective, and A Westfall Story features Defias bandits and murlocs.

Once you’ve made a killing on the stage, you’ll return to the lower levels. Jealous of that nifty shiny mount death knight players get as temporary steeds from their Class Order Hall talent? Attumen the Huntsman now drops a version of one when you defeat him. You’ll fight the Maiden of Virtue, and, of course, Moroes himself.

“Once you pass him, you’re completely in all new territory,” Hazzikostas said. “We had a lot of fun building this area out. It’s upside-down, Escher-inspired. The rules of physics and reality don’t normally apply. You’re in the old library, but you’re walking on the ceiling, with upside-down constructs on the floor above you.”

Instead of fighting the shade of Aran in the library, you’ll fight the shade of Medivh – but expect flame wreath, a mechanic that blew up players who traveled outside fiery rings on the floor (something people did with such regularity that viral videos were made from it) to return.

This video shows players how to react to flame wreath in a Gregorian chant:

The player-controlled chess board returns, but it’s deconstructed, Star Trek-style chess with 3D movement, where the raid works to get from one side of the room to another. Continuing the sci-fi theme, Legion forces at the top of the tower call in capitol ships, which players will beam aboard and take control of.

“The bottom half of Karazhan is a new gloss of paint on some familiar nostalgia,” Hazzikostas said. “The top layer is a new crazy experience. It’s a weeklong lockout, multi-hour experience. That’s an experience that lends itself best to running with five friends or people you’ve met.”

The new patch also brings another traditional large-group raid, Trial of Valor, which launches in two weeks. This too presents a different format: a much shorter dungeon than normal for groups of larger sizes, with just three bosses. That quicker experience for larger groups hasn’t been seen in the game since the early days of its first expansion, The Burning Crusade. 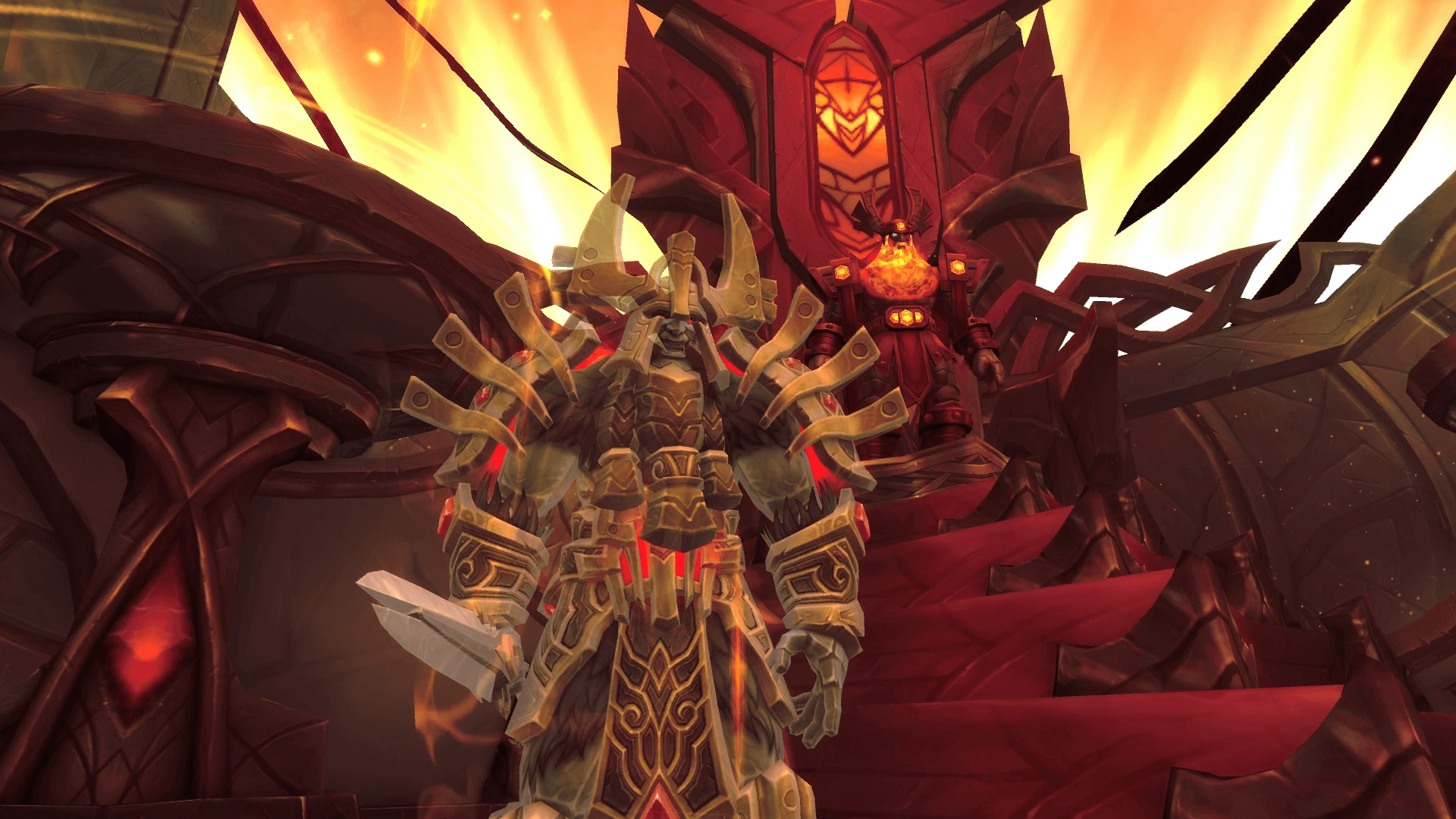 Above: Odyn appears in the new Trial of Valor raid.

“It’s an opportunity to finish a really cool storyline,” Hazzikostas said. “It’s the conclusion of the story of the zone Stormheim.”

Stormehim is a Norse-inspired zone, and players have battled the god Odyn and evil queen Helya in Legion five-man dungeons. Odyn is now the first boss of the raid.

“When you fought him in the dungeon, he was just testing you. He just wants good sport,” Hazzikostas said. “He stopped the fight at 80 percent. He was holding back, because he didn’t want to actually kill you. This time he’s not holding back; you’re proving yourselves worthy to be his ultimate champions, to venture down into Helheim on his behalf and put an end to the war between light and shadow in Stormheim.”

Some mechanics from the dungeon will return, including Odyn’s spears and runes on the ground players can use to empower themselves. But others will be added. Prove yourself worthy and you’ll descend into Helheim, where you face off against Guarm (a giant three-headed hound you snuck past while questing in the zone) and Helya herself.

“You make your way to Helya’s throne. She’s standing against a raging ocean backdrop, with tentacles looming, and you’re going to settle the score,” Hazzikostas said. “Helya is fairly different because the setting is different. [In the dungeon,] she was weakened because she was grappling onto the front of the ship that you were on. Here you’re fighting her in her realm.”

“She is the mistress of the [undead, Viking-like] Kvaldir. Periodically, as you’re dealing with her blackwater barrages and her tentacles, she’ll withdraw into the water and thick fog rolls in, bringing with it various types of Kvaldir that players will have to deal with.” 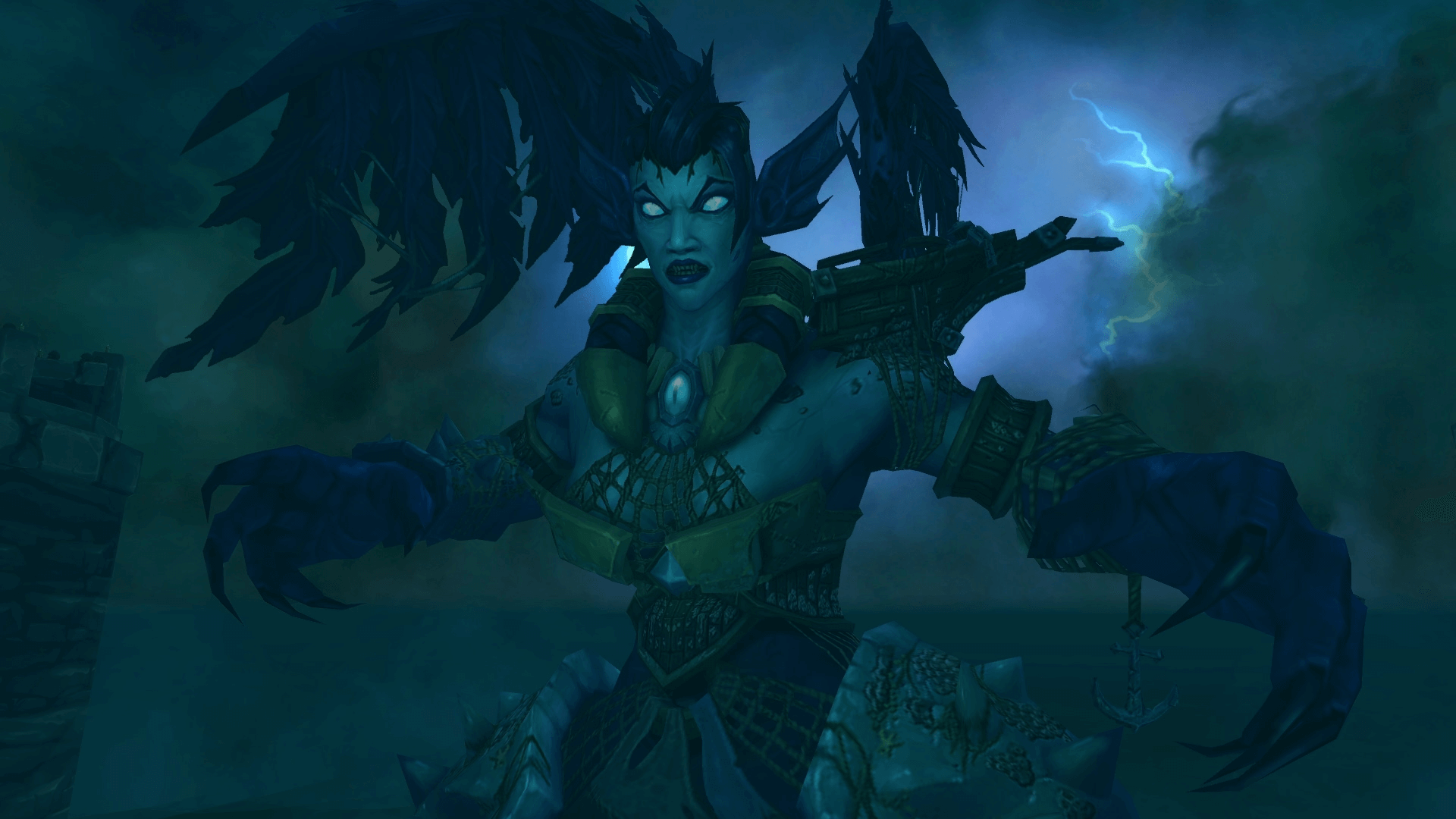 Above: Helya in Trial of Valor.

The fight, alternating between combating Helya herself and her numerous forces, should remind players of the Ragnaros the Firelord encounter from the Cataclysm expansion’s Firelands raid dungeon.

Fans of traditionally sized raid content still have larger dungeons to work on: Emerald Nightmare, which launched soon after the Legion expansion pack in September, still offers a challenge to most players at one difficulty level or another. The next big raid, The Nighthold, will launch early in 2017, and it will again give players a larger number of bosses to kill and a challenge for larger groups.

The company learned the perils of releasing raid content too early in the last expansion, Warlords of Draenor, when a second raid was released after many players hadn’t worked their way through the first.

“In retrospect, Blackrock Foundry probably released too early,” he said. “A lot of players were still working their way through Highmaul, and suddenly a new instance came out that felt like it obsoleted it and moved you along before you necessarily wanted to. We think four months is a good amount of time for a raid tier the size of Nightmare.”

Still, the timing can be tricky. The Emerald Nightmare fell more quickly to top guilds at higher difficulty levels than any raid in history, in part because Blizzard made a commitment during Legion to offer high-difficulty five-man content with similar gear to raiding. Dungeons could be run with new mechanics, tougher opponents and tight time limits for better armor.

Players in top guilds plowed through those high-difficulty five-player dungeons before Emerald Nightmare launched, gearing up to the same level of armor that the raid dropped, essentially overpowering it the moment Blizzard released the experience. Ordinary guilds were much further behind, but even they have made steady progress through Normal and Heroic difficulties.

Their progress presents a challenge: Many of those guilds don’t have the solid core of 20 (and only 20) players required to complete the final Mythic difficulty setting for raiding. As a result, Karazhan and Trial of Valor arrive just in time to avoid raiding boredom for those popular mid-range guilds of players.

The two new dungeons were already planned, and are designed to keep players who raid engaged in the game between now and Nighthold’s release.

No raids for you? Still more stuff to do

Blizzard promised that significant new content would be releasing more often in patches to the game, and patch 7.1 includes a wide variety of single-player content additions beyond the new raids. The trick will be holding onto raiders’ interest between now and Nighthold, if they topple Trial of Valor and Return to Karazhan as quickly as they did Emerald Nightmare. 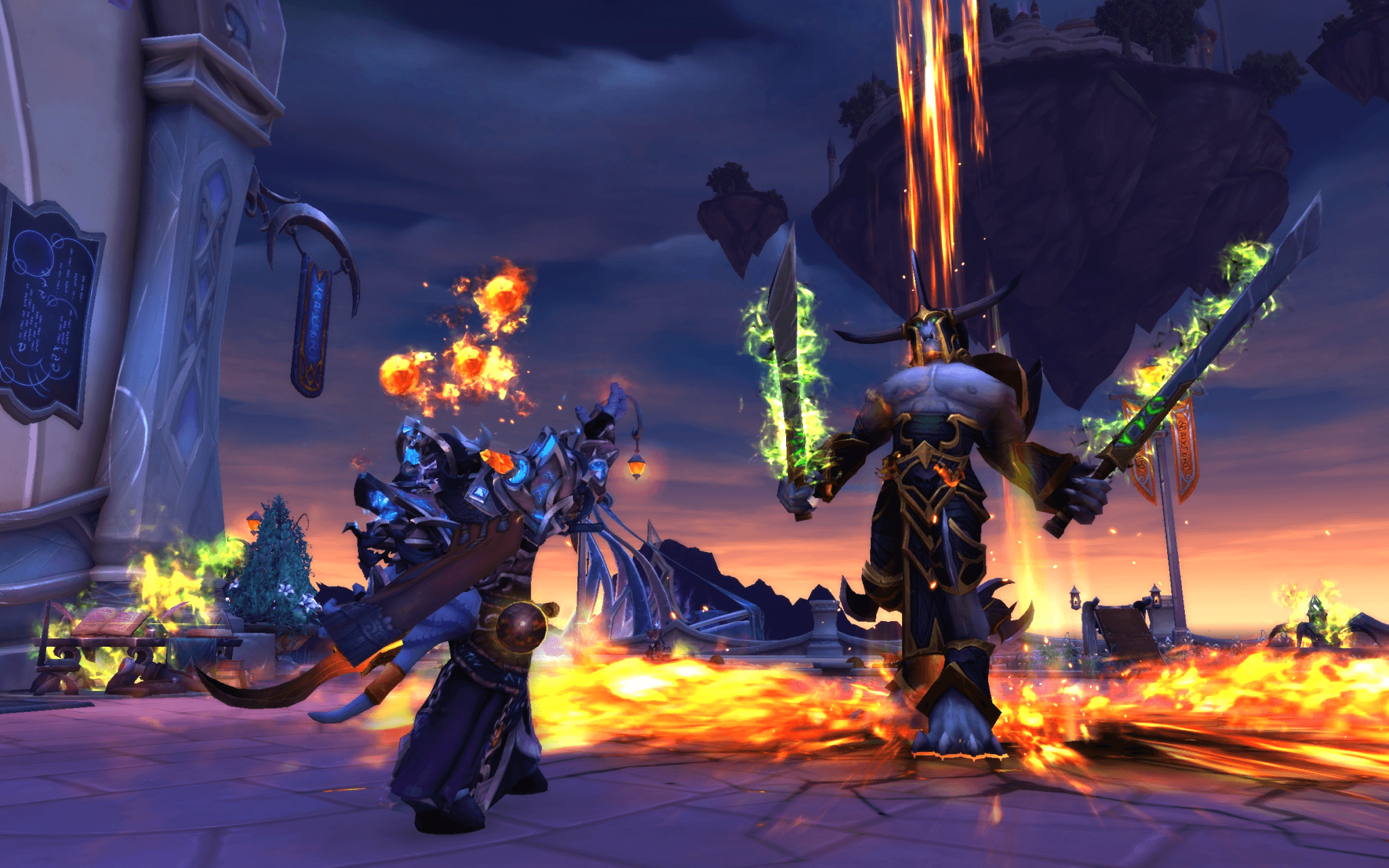 Above: New single-player content in patch 7.1 includes a new questline in the city of Suramar.

“We want to make sure we’re pacing our content to make sure players can experience a steady stream of our content without cutting ourselves off at the feet prematurely,” Hazzikostas said. Even the item level for the gear dropping from Trial of Valor was tweaked right up until the patch’s launch, to make sure it’ll fit nicely into where players are at with their gear levels, providing satisfying upgrades.

This week’s Karazhan launch will help to determine whether that strategy will continue to be a success.