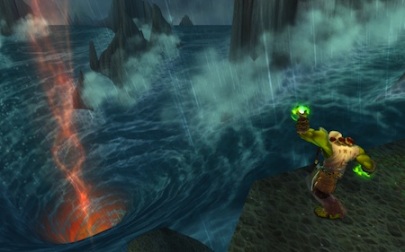 Subscribers for Blizzard Entertainment’s World of Warcraft online game have fallen to 10.3 million in the third quarter, the company said today. That’s a dramatic drop from the 11.1 million it had in the second quarter.

The rate of loss is alarming since World of Warcraft is a cash cow for parent company Activision Blizzard.

Each WoW player pays about $15 a month, though rates vary around the world. More competition is coming into the massive multiplayer online game market, so Blizzard is focused on taking action to turn around the loss in users, said Mike Morhaime, president of Blizzard, in an earnings call this afternoon. The Blizzard part of the call was part of a larger trend in which Activision Blizzard blew past earnings numbers for the third quarter.

Blizzard Entertainment announced World of Warcraft in September 2001. It came out in November 2004 after several delays. The game was immediately a hit with fans of massive multiplayer online role-playing games — or MMORPGs — and ended up killing several other subscription-based online games, such as Tabula Rasa and Star Wars: Galaxies. The game grew like wildfire, eventually reaching a peak of more than 12 million active subscribers.

Blizzard is introducing a new expansion, Mists of Pandaria, which is expected to debut in the near future. It also recenly announced the World of Warcraft annual pass, which gives a free copy of the upcoming Diablo III game and other benefits to anyone who signs up for 12 months of World of Warcraft. Blizzard made the announcements at Blizzcon, its annual fan event. Blizzcon drew 26,000 fans to Anaheim, Calif., as well as another million who watched online.

Morhaime said a huge number of players are in China, and WoW continues to be the most popular online game in the world. He said the previous expansion, World of Warcraft Cataclysm, had content hardcore users consumed too rapidly. Blizzard is studying ways to keep gamers more engaged with future updates and expansions.