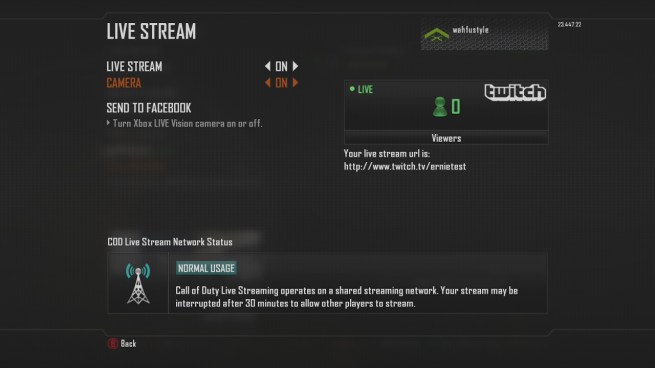 Twitch announced today that it partnered with publisher Activision and developer Treyarch to enable live streaming 0f Call of Duty: Black Ops II directly to Twitch. Black Ops II launched with the ability to broadcast gameplay to YouTube. By expanding this feature to Twitch, Treyarch will reach a more dedicated audience of gamers.

“Making Call of Duty: Black Ops II not only fun to play but also fun to watch was a key goal from the beginning of development,” Treyarch studio head Mark Lamia said in a statement. “We pushed ourselves to build these features right into the game in order to make live streaming as accessible and as social as possible for everyone. One of the things that makes this so special is that there’s no need for additional hardware or equipment. We want our fans to be able to share their experiences with the world.”

Many players already aired their Black Ops II gameplay on Twitch using video-capture devices and special software, but the built-in tools should help democratize the game-streaming scene. Gamers on the Xbox 360 can use their headsets to comment while they play, and they can even use the Kinect camera peripheral to stream video of themselves alongside the game. PlayStation users can do the same with a Move camera.

“Twitch is extremely excited to announce our integration with Call of Duty: Black Ops II,” said Twitch chief executive officer Emmett Shear. “It’s going to blow the doors wide open for a new generation of console gamers to share their video game experiences. There’s no bigger gaming franchise on the console than Call of Duty, and we can’t wait to see what the community can create with this new tool. In-game streaming is entering a whole new world.”

Gamers can use their existing Twitch accounts. In addition to the Twitch website, players can view the streams using the Call of Duty: Elite app on phones, tablets, and browsers.

Twitch is a huge platform already. The website racks up 23 million unique viewers per month. Over 300,000 unique game broadcasters fill the site with nearly limitless content. The average viewer watches 1.5 hours of video a day. In December alone, users watched a total of 2 billion minutes.