Rebel Galaxy is the latest work from Double Damage Games, a studio that was built by the founders of Runic Games, most famous for the Torchlight series. The two-man team worked on popular PC game Diablo before that, making them superstars in the development world. But this game is far outside the Diablo-like hack-and-slash genre. It’s set in lawless space, with junky old ships and rusty bases spread across multiple (procedurally generated) galaxies, where anything (bad) goes. It’s a sandbox game with a grimy twist, though it does have a storyline that takes players across all of the galaxies and into a space-battling endgame.

Rebel Galaxy is coming to PS4 and PC later this year.

I did nothing to progress that storyline in my first session, as the random missions are entertaining enough on their own. As a guy who just inherited a huge, crappy spaceship from my apparently famous space-traveling aunt, I set off on my first jaunt, a simple whiskey delivery task. Flying from the first base to the delivery ship was easy with Rebel Galaxy’s simplified ship controls. Tapping one button controls thrusters, holding another kicks on limited-time rocket boosts (you can upgrade them), and steering is slow but easy. Hitting warp speed and blasting through space looks and feels great.

My contact hailed me asked me to hand off the pay for the precious cargo, and a dialogue tree let me choose between a few options, pointing to the open-ness of this space sandbox. I could have paid up to receive and deliver my cargo like a responsible space citizen, or I could refuse and leave. And if I wanted to be a rebel, as the title suggests, I could have flown off, turned around, blew up the ship, stole the cargo, and pocketed the funds.

I’ll let you guess what I did.

Taking on new missions is easy in Rebel Galaxy. Waypoints float off in space, and random prompts and other challenges pop up to keep things interesting,  and simply flying into any of them can start something new and fun. Coming back to base to take on new missions is always an option, too. That aforementioned porn-blasting mission came through the base’s mission board. The discreet request was to blast some floating crates out in an asteroid field, but it turns out that these crates were a secret stash of pornography, according to CEO and creator Travis Baldree. He told GamesBeat that he was up late one night creating missions for Rebel Galaxy and couldn’t think of what to put in the crates and that porn seemed as good as any cargo. It’s clear that Double Damage Games had fun making of this game. 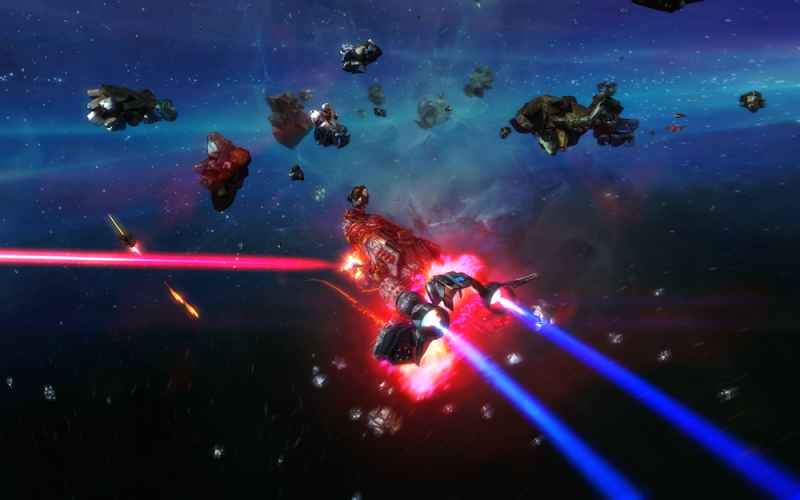 Above: You never know what’s hiding out there in those asteroid fields.

The base is where you go to upgrade your gear and add new weapons. It’s also where you sell loot — one thing Rebel Galaxy has in common with Diablo. Before my time was over, I dumped my finds to add shields, turrets, and upgrade my ship’s broadside guns.

I wanted to play with all of these new toys, so I took on a few missions that would let me fight. While maneuvering the ship is easy, doing so while fighting off bombers and destroyers is another story. I embarrassed myself by knocking into asteroids and space debris at low speed while trying to fend off attackers. There’s a learning curve, but I could see where one could improve with some practice. The Double Damage team told me the goal was to make these ships feel huge and powerful and to make the battles feel like naval combat.

It took awhile to get the hang of weapon-switching and reticule use, but I got it after a bit. Once I learned how to charge up and aim my broadside guns, I was doing just fine. And it was worth the work — taking massive ships down with long-distance side blasts is quite rewarding.

Rebel Galaxy’s name sort of points the player toward a role, but you can be whatever you’d like in this space sandbox. You could get into commodities (it has a full trade system), solely out for money and gain. Or you can be a bounty hunter. A space delivery man. Or any mix  — it’s up to you. A faction system watches all of your mission decisions and interactions and changes the universe accordingly, giving each player a unique experience.

Double Damage built the world — it’s up to the player to shape it.