Jumping on the fitness gaming trend, Blue Goji is launching its Goji Play system of wireless hardware and games that are aimed at getting you into better shape. Blue Goji lets you turn your cardio fitness bikes or treadmills into “gamified” experiences, where you can play games while you’re exercising and forget about the hard work. 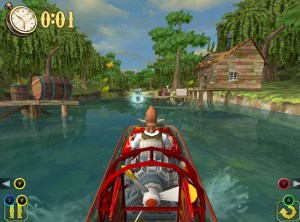 They are part of a trend of using games to motivate people to do things they really don’t like doing, like exercising. But they hope to differentiate themselves with a unique approach to getting the experience just right and attract people who would never otherwise play a hardcore game on a video game console.

Blue Goji and its partners have created a dozen games that are available on the Apple iTunes App Store. They also built a Bluetooth-connected sensor that measures your movement as you clip it to your legs or hips. And they have some large game controller buttons that you attach to the handlebars of an exercise bike or treadmill. The system measures your activity and tabulates your stats and the progress toward your goals, like exercising for a half hour a day five days a week. The “meta game” of competing with your friends will also make you work out harder.

“Cardio is very boring,” said Kai Huang, chief executive of Santa Clara, Calif.-based Blue Goji. “People want something to do, like read or listen to music. We feel that games are the most engaging activity. The others are passive, but we think we can create an immersive experience.” 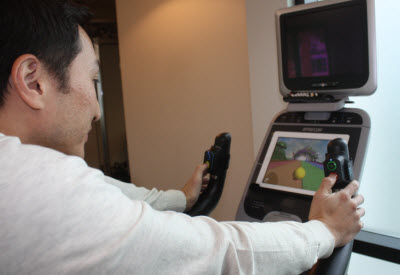 Above: Kai Huang plays exercise game on a stationary bike.

The free games are simple titles like a boxing game or an endless runner title. They’re designed to be engaging enough to keep you focused and interested in the game. They essentially motivate you to keep going — if you don’t pedal hard enough, the game will halt. And they also make you forget about the workout. The games let you progress through a bunch of levels. The more you exercise, the more rewards you unlock.

The company was cofounded by Kai and Charles Huang, brothers who cofounded RedOctane, the maker of the multibillion-dollar Guitar Hero game series. They were also joined by cofounder Coleman Fung, founder of Open Link. As they did with Guitar Hero, they’re creating their own custom game platform and selling the whole package together as a self-contained system for $99.

“Our goal is to give you an immersive experience and make you forget you are exercising, to make 30 minutes feel like five,” Huang said.

The company could have used a simple iPad game with a touchscreen. Or it could have used gesture controls. But after studying the problem, Huang said that the touchscreen wasn’t a good, snappy experience. And the gesture controls were actually too tiring to do for a long time. So the team created its own wireless buttons and the Bluetooth sensor. The play system works with the iPad or iPhone. You need a recent version since the system relies on the low-power Bluetooth Smart wireless protocol. 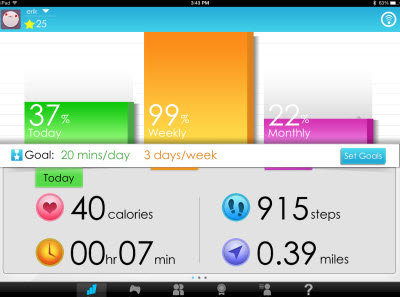 Above: Goji Play stats screen shows you how close you are to your goals.

There are lots of companies that are trying to gamify fitness. Striiv has its own sensors that measure how much you walk and then reward you with a currency that you can spend in a fantasy game. Nintendo started the modern fitness gaming craze with Wii Fit, which used a Wii Balance Board to get you to exercise in front of your TV. But Huang believes people are especially bored while working out on cardio equipment, and that’s why so many of the machines go unused.

“Could we take games and apply them to exercise?” Huang said. “In our experience with Guitar Hero, we saw that great games could get people immersed and excited about playing. Games can also get people active. Games are interactive, not passive. We loved that aspect of what games could do.” 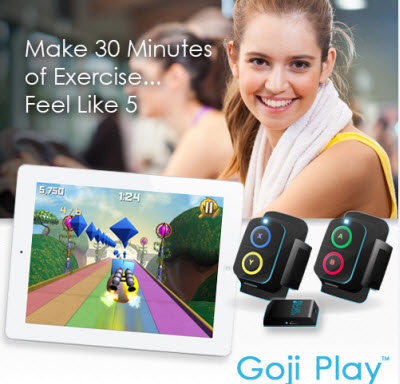 Above: Goji Play is aimed at a broad swath of the population, not just gamers.

Blue Goji designed its games to incorporate movement. If you don’t pedal fast enough, it has an impact in the game. Vector Unit, a third-party game studio, made two games for Goji Play — Riptide GP and Shine Runner — but Blue Goji has made most of its own games so far. It is talking with other companies to get third-party games on the platform.

I used the system to exercise at home. The app shows you how to pair the Bluetooth Activity Sensor with your device. I had to tape my iPhone to the top of the bike, but the Goji Play buttons fit nicely on the handle bars. You can strap them to fit any size bar for a treadmill, stationary bike, and elliptical machine. I played Smash the Blocks and the boxing game. They were fun, but it took a while to get used to them, and the buttons weren’t always precisely responsive. But I managed to get through my workouts, and I’d like to see how long I can stick with them. My kids have also started playing around with the system.

Blue Goji teamed up with MyFitnessPal to enable members to sync their profiles and exercise stats across the two platforms.

The company is self-funded and has 12 employees. The founders started the work two years ago, well after they sold Red Octane to Activision in 2006 and the Guitar Hero craze ran its course. Rivals include Expresso Fitness.

Blue Goji plans to distinguish itself by making truly addictive, engrossing gaming experiences. It’s not about casual play or gamifying something boring.

“From our testing so far, Goji Play has a very broad appeal,” Huang said. 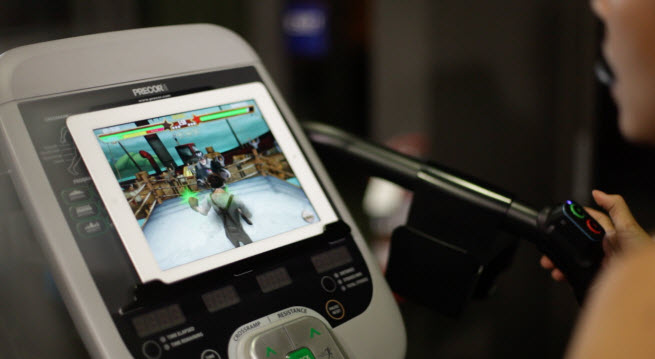