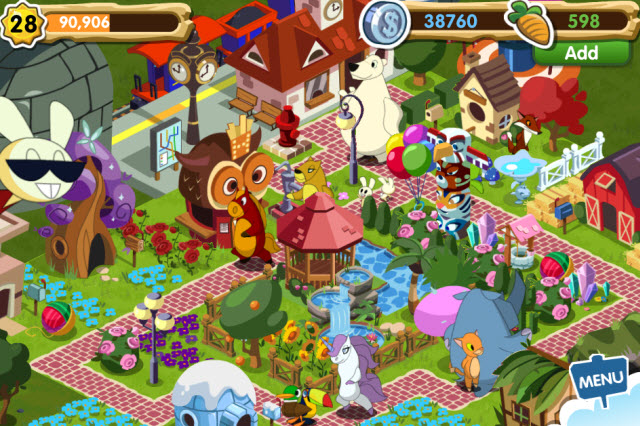 Booyah, the maker of real-world social and mobile games, announced its newest game today, Pet Town. It is another step in the company’s reinvention of itself.

San Francisco-based Booyah was founded in 2008 with early money for mobile games from Kleiner Perkins Caufield & Byers. It saw its My Town franchise soar into the stratosphere in popularity, only to see it stall. Under a new chief executive, the company is now releasing a new slate of games that it says have put the company back on the growth path.

The Pet Town game is now available in the Apple App Store and it is part of the company’s goal of being the category leader in real-world entertainment.

In the game, players create the ultimate destination for an array of pets and make their dreams come true. It comes city-building gameplay with influences from simulation and role-playing game classics like Animal Crossing. The game asks, “What if pets were real, with dreams just like ours, and there were no zoos?” It lets you build a personalized community filled with lots of pets. You can help your pets make friends, open a business, and go on vacations in the real world.

“It’s exciting to see our creative teams deliver such a unique and innovative take on this popular style of play,” said Jason Willig, chief executive of Booyah. He replaced founding CEO Keith Lee back in October. In the last five months, the company has released three new products.

In future updates, the pets will cross the boundaries of their world and show up in real-world locations. The company did a soft launch in Canada to get critical feedback on the game.

Booyah also released a major update to My Town 2, which was released in October as a location-based app akin to Monopoly, only set in the real world. MyTown 2 has been played by more than 3.5 million people, and the new update allows for features such as social gifting and citizen interactions as well as Facebook Connect support. The game is the No. 1 city-building game on the App Store. MyTown 2 players have created more than 2.4 million unique real world businesses in 130,000 cities across 43 countries. In a typical month, there are 75 million user sessions and 1.2 billion real-world business interactions.

Besides Kleiner Perkins, Booyah’s investors include Accel Partners and DAG Ventures. Booyah has raised about $29.5 million to date and has about 50 employees.

The company’s recent hits have been played by 10 million people. Early Bird, released in late August, has been installed 6.3 million times. Willig said that the fourth quarter was probably the best financial quarter in the company’s history, with several million dollars in bookings. The company has opened a second development studio in Seattle and it now has four development teams working on an aggressive slate for the first quarter.