When Super Mario 3D World comes to the Switch on February 12, it comes with a bonus campaign: Bowser’s Fury. So … what exactly is Bowser’s Fury?

I’ve been able to play through the adventure thanks to a code I got from Nintendo, so I can tell you! Bowser’s Fury may not be the length of a full-sized Mario adventure. It’s not as long as, say, Super Mario Odyssey. But it’s also much more than a few bonus levels. It is a full concept, fleshed out enough to feel like a fulfilling experience.

Beating Bowser’s Fury is a complete adventure, especially when you take the time to collect all the Cat Shines (this game’s equivalent of Super Mario 64’s stars or Super Mario Odyssey’s moons). Although the game runs on the Super Mario 3D World engine and uses its mechanics, enemies, and power-ups (hello, Cat Mario), Bowser’s Fury is a different kind of animal from the 3D World campaign. 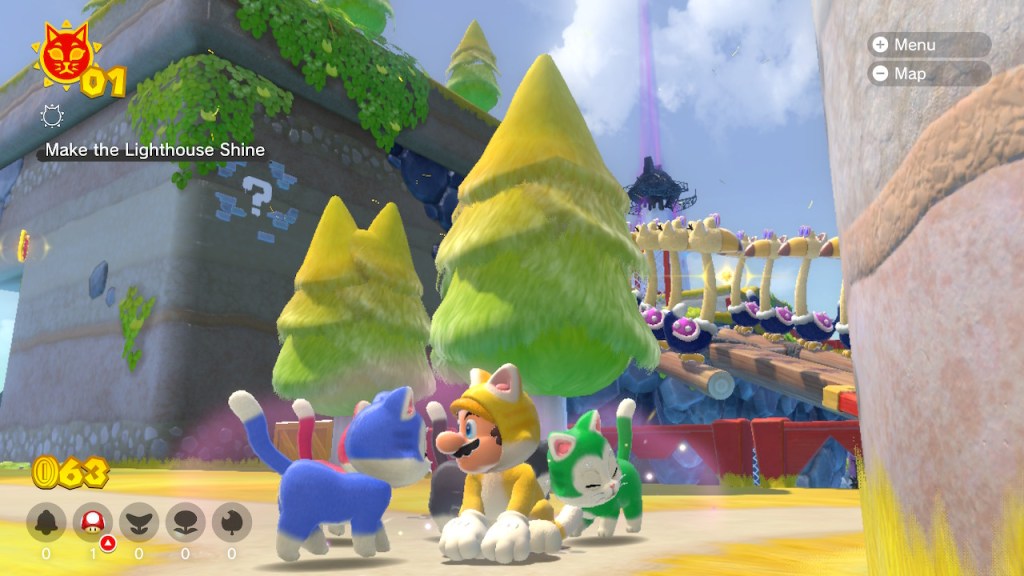 Super Mario 3D World features small, linear levels that you explore through an overworld. Bowser’s Fury, meanwhile, takes place in one giant world. It’s like one of the kingdoms from Super Mario Odyssey, just bigger. But you shouldn’t think of it as one big level. Within that large, seamless world exists smaller subsections. Think of these as the individual stages. They just all exist in the same open space, many of them as islands in a big lake. You can traverse the seas with help from Plessie, a Loch Ness Monster-esque creature who can carry Mario like a speed boat.

Each of these areas hosts a handful of unlockable Cat Shines. You can earn each of them by completing an objective. For some, this could just mean completing a linear obstacle course. Some are more hidden, some require you to collect multiple items to unlock (similar to the red coin challenges from Super Mario 64), and some only become accessible if Fury Bowser blasts a wall open with his fire breath. You’ll find even more Cat Shines hidden in the watery areas between these stages.

Oh, yeah, Fury Bowser is a big part of the experience. Every so often, this giant version of Mario’s nemesis will emerge from the water. You can’t hurt Fury Bowser unless you’ve collected enough Cat Shines to turn into a giant Giga Cat Mario. Otherwise, you’ll have to dodge his attacks until you collect a Cat Shine or he tires himself out. Again, some Cat Shines are only accessible while Fury Bowser is out, so you can use his appearances to your advantage. 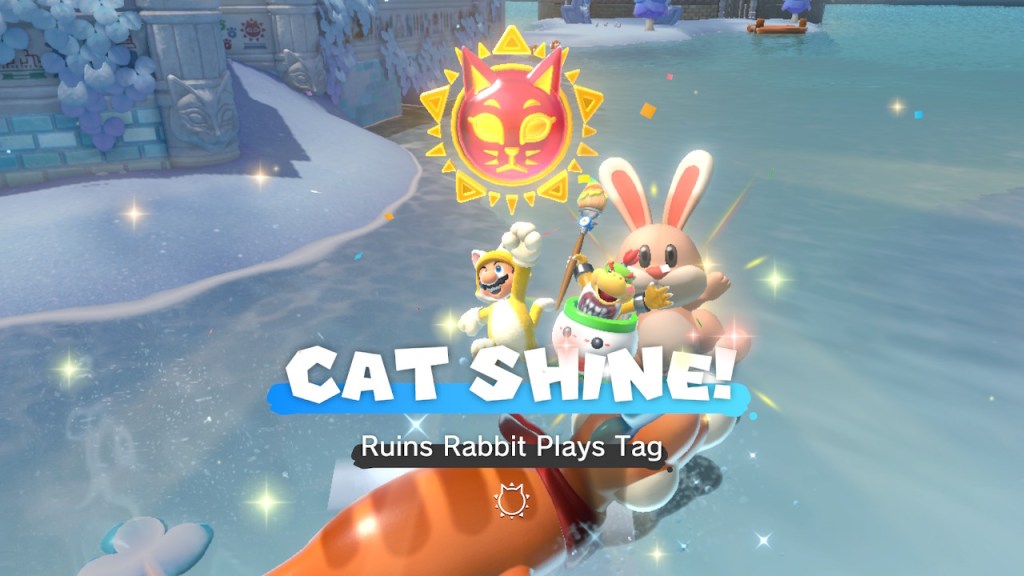 Above: Get those Cat Shines!

You also have Bowser Jr. helping you throughout your adventure. If you’re playing by yourself, he’ll assist you on his own by attacking enemies every now and then. A menu setting even lets you decide just how often Bowser Jr. will help you. You can also use the Switch’s touchscreen or — if you’re playing on your TV — a controller’s gyro controls to point and click Bowser toward powerups he can unlock with his magical brush. If you played Super Mario Galaxy on a Switch via Super Mario 3D All-Stars, controlling Bowser Jr. works the same as that game’s pointer.

If you have a friend around, you can have a second player control Bowser Jr. directly. They won’t have as much control over the adventure as the player who’s running around as Mario, but this is a nice way to get others involved (as a younger brother, it reminds me of playing as Tails in Sonic the Hedgehog 2).

Bowser’s Fury is surprisingly ambitious. This is the largest open space that Mario has ever had to run around in. It takes the excellent mechanics of Super Mario 3D World and adds them to the more exploration-based formula of games like Super Mario Odyssey.

It’s a fantastic addition to what is already an amazing 3D platformer in Super Mario 3D World.