Time to play some sideways Tetris.

The folks at HAL Laboratory have managed to pull themselves away — likely through a labyrinthine, David Mamet-level plot of subterfuge and trickery — from developing Kirby and Smash Brothers to create an entirely new game. The result of their epic escape from routine is BoxBoy, a monochromatic platformer for the Nintendo 3DS that tasks you with creating and manipulating a variable series of boxes through over a hundred puzzle stages.

Nintendo has made little marketing fuss over little BoxBoy’s (or Qbby, as he is properly known) debut, and at an equally minute $5 price, the most demanding puzzle might just be making a case for its own relevance. I snaked my boxes through all 17 worlds to see if we have a new puzzle game star, or if BoxBoy was quietly slipped out to market for a reason. 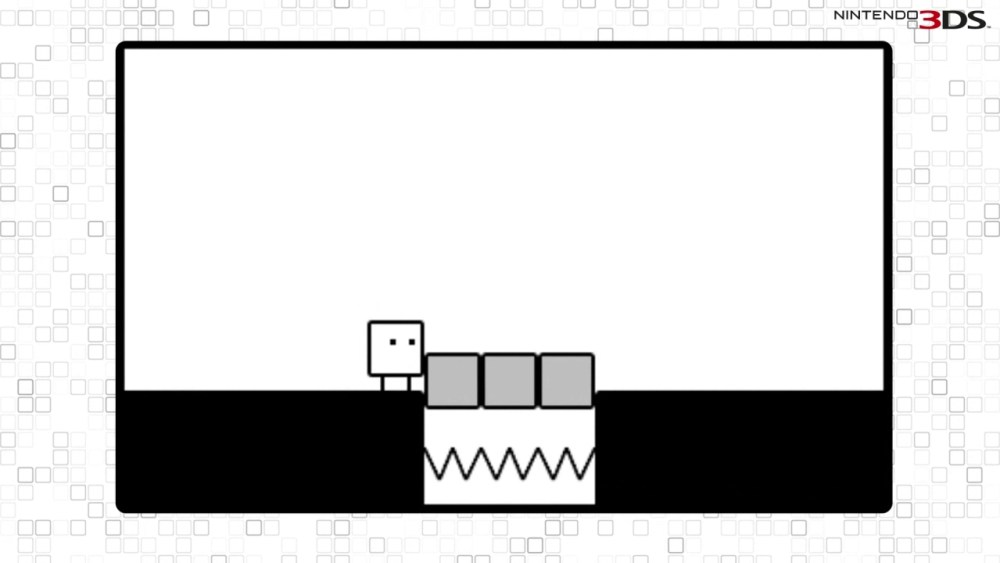 Above: BoxBoy isn’t too challenging, but still manages to evoke that thrill of finding a solution.

I feel this year is a good time to remind everyone that not every game needs to be intensely challenging. Between the tauntingly aggressive Bloodborne and what feels like the entirety of indie platformers since 2007, many games seem to be measuring their value in broken keyboards and livestream meltdowns. BoxBoy couldn’t double as a Mensa exam, but it’s not insultingly easy either.

The level of challenge in BoxBoy is pretty ideal for a younger player getting used to the nature of room-to-room puzzle games. Each world contains an average of seven stages further broken up into two-to-five separate puzzles to solve before you can move onward. Only a few of BoxBoy’s square-based conundrums will stump anyone that has found a solution in Portal, and even then the confusion won’t last five minutes. Even the optional crowns you can collect in each level don’t add a significant layer of difficulty. It’s more of an off-white matter workout than a gray matter one.

You begin learning the basics of jumping and spawning a series of blocks off of yourself for use as bridges or weights for buttons. HAL introduces new ideas and concepts gradually, with ample time to process and absorb. Over the span of the three to five hours it takes to beat the main campaign, you”ll snake out three boxes from your head to use as a hook right after you carried a spiky ball of death on a makeshift chair you sprouted from your backside. And if you saved up enough of the points you bag when you complete a level, Qbby will wear a knight helmet while he does it.

They made a square adorable

Qbby is, spoiler warning, a box. His two traveling companions are also boxes. What aren’t boxes are composed of jutting triangles or curved right angles. So it is a testament to HAL Laboratory for wringing some endearing personality out of this often harshly geometric world.

BoxBoy is not an emotionally wrought journey of Thomas Was Alone proportions, lacking any narration and boasting only two short cutscenes. But the reactive animations of Qbby and his compatriots nevertheless gives them an unexpected dose of life. Qbby will bounce into one of a few celebratory dances after beating a level, and one of his eyes will burst forth in surprised agony size when he lands butt first on a spike. And the little guy is either constipated or deeply focused when spawning new boxes off of himself, or at least his squinted face and furious shaking makes it look like a difficult job.

HAL Laboratory is obviously proud of these little visual flourishes. Qbby barely waits for five seconds after the player has stopped moving before going into a variety of idle animations, differing dramatically depending on which optional costume he has equipped. Qbby brightened the few times I get momentarily stuck on a puzzle when he took a snooze with his super hero cape wrapped around him, or floated in place with a valiant look in his eyes.

A style direction that went the wrong way 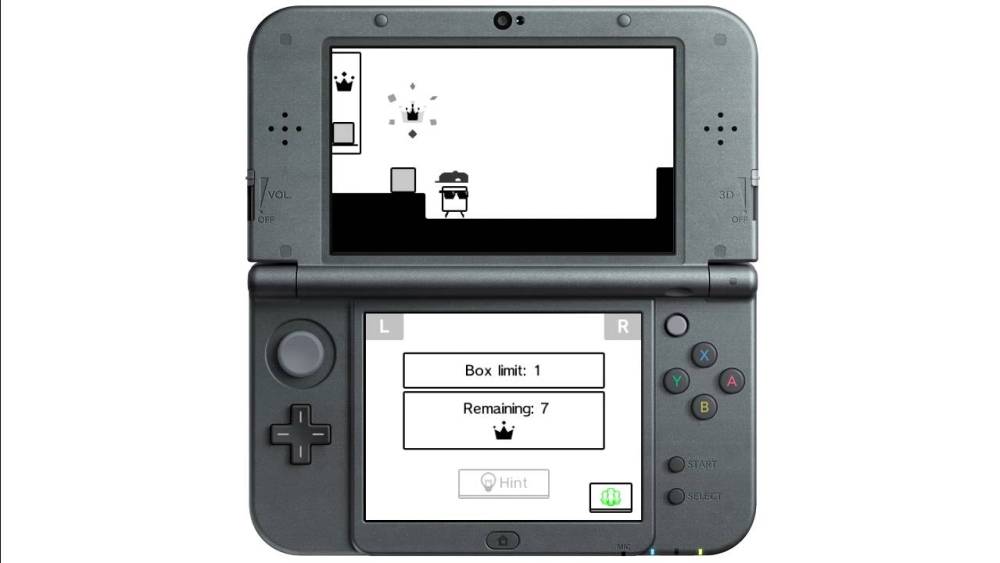 Above: BoxBoy is a funny little guy regardless of how you dress him up.

The only thing the simple, minimalist art style of BoxBoy is missing from looking like a remaster of a Game Boy game is the iconic green tint of that original Nintendo handheld screen. That isn’t innately a bad thing. But the constantly march of puzzle rooms composed entirely of stiff angles and prominent, bold contrast does start to strain the eyes after a while. It also has a bizarre disconnect in the momentum of your jumps, the animations selling a much greater distance than what you can actually pull off.

The music can be equally grating. The simple loops of retro-sounding electronic chirps feel like they are on a constant repeats. At its best, it’s in the background. At it’s worst, it’s the game audio equivalent of your boat breaking down in the middle of a kid’s amusement park ride.

If the goal here was to come off as “simple and sweet,” HAL overshot the mark, and the arrow landed directly on “cheap.” Many puzzles came with severe deja vu, as the few shapes and object designs used throughout began to blur together after a while. For those picking up this game for just a few levels’ worth of puzzles at a time, you likely won’t notice this. But for those embarking on any sessions lasting longer than 15 minutes, consider investing in some aspirin.

Unless you are asking players to match three similarly colored objects, you don’t want your puzzle game to go on forever. BoxBoy gets to those hundred puzzle rooms by taking entirely too long in between introducing new gameplay elements. You spend too much of each new world learning to block lasers or drop boxes into place onto disappearing platforms, often exclusively, with barely any blending of previously learned tricks. It is only the final level — World 17 — that asks you to recall more than one or two things in your arsenal of block-based abilities.

Escalating the difficulty curve a little quicker or simply cutting the number of stages per world by half could have  mitigated this padding. But as it is, even players new to puzzlers will have gotten the hang of sticking to walls twenty minutes before the game lets them move on.

At $5, it’s hard to find more puzzle content than what is available in BoxBoy. That’s not always a good thing, as it feels scared of asking players to learn something new without making them study it for three too many puzzle rooms. But the harsh art design and excess gameplay fat don’t do enough to negate the thrill of figuring out a solution or the charm of watching your little square friend celebrate. BoxBoy is a welcome, easy-going new entrant into puzzlers that deserves more attention than it will likely get on its current marketing trend.

Picture your own box pun to end with here.

BoxBoy is out now for the Nintendo 3DS. The publisher provided GamesBeat with a digital code for the purpose of this review.