I was a fan of Bravely Default, so I was happy to go back for seconds (ha ha).

Bravely Second: End Layer is the sequel to the Square Enix 3DS role-playing game that took a lot of its inspiration from the Final Fantasy series’ earlier entries (back when it was actually turn-based and crystals meant something). This follow-up comes out on April 15, and it gives players some new features and new Jobs (the game’s version of classes).

It’s the kind of RPG we don’t see too often these days, full of the charm that made these so popular in the ’90s. Bravely Second marches forward with more nostalgic glee, even if it does inflict some moments of déjà vu. 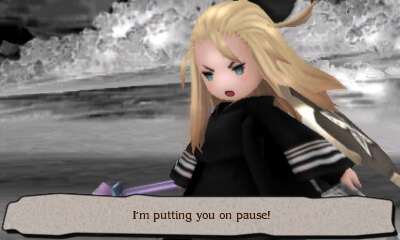 Above: You can use the Bravely Second feature to pause the game and use extra turns, but you can only use feature a few times a day.

All of the Jobs from Bravely Default return, but you also learn a lot of new professions in Bravely Second. They’re all interesting and stand out a bit more than the originals (many of those came directly from Final Fantasy). The Charioteer can equip weapons on the head slot, enabling them to earn extra attacks in battle. The Wizard can apply different effects to spells, like making sure they go first in a round or having them attack every enemy of the same type.

Other new Jobs are fun twists on familiar archetypes. The Catmancer is basically a Blue Mage from Final Fantasy (a class that could learn enemy abilities), but, you know, with a lot cat stuff. Who wouldn’t love that?

Bravely Second uses the same battle system as Bravely Default, which stood out for how players store and spend turns as a form of currency. When it’s your party’s chance to attack, you could also choose to Brave or Default. Brave lets you act more than once a turn with a cost (if you Brave three times and attack four times in one turn, that character will become inactive for the next three rounds), while Default increases your defense and stores a turn. The trick comes in knowing when to patiently Default and stack up on extra actions and when to spend all of them by using Brave. It’s a great system that adds a lot of depth to traditional turn-based battles, especially once you start mixing in all of the abilities you learn from Jobs.

Jobs are basically classes. Each of your four characters can equip one at any time, and they level up Jobs separately from their own character. So, a level 30 character might also be a level 3 Thief, for example. 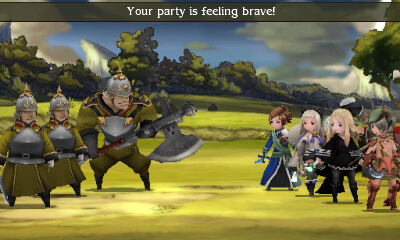 Above: A brave party gets an extra turn.

You can change Jobs whenever you want, and that’s where the depth comes in. You can keep a limited number of skills and abilities that you’ve learned across all classes no matter what you’re current Job is. So, to really be an effective fighter, you look for abilities across different Jobs that compliment each other. One might have an ability that boosts your magic attack, which you can still use for all other classes that use spells.

In most RPGs, you’re going to need to fight a lot of extra battles to make your party stronger. Fans call this grinding. Some love it, and others hate it. I’m on the pro-grinding side. I find it relaxing and rewarding, and Bravely Second makes all of that experience point-hunting more convenient than other game.

Like in Bravely Default, you can set your enemy encounter rate to whatever you want. So if you want to grind, you could make it so monsters appear twice as often as usual. You can even turn random battles off completely if you’re just trying to walk somewhere and don’t want any interruptions. You can also increase the speed of battle animations, which makes those random fights take a lot less time to complete.

Bravely Default also lets you repeat your previous action in future turns, but Bravely Second makes things even more convenient by allowing players to save up to three different sets of actions. So, when you come across a group of enemies, you can easily choose a preset that has all of your characters spam physical attacks or, depending on who you’re fighting, magical attacks that exploit specific weaknesses. 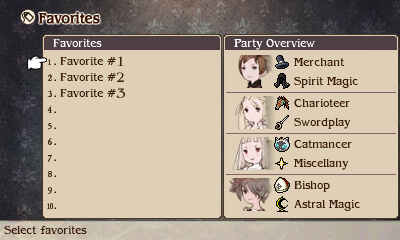 Above: You can also save Job configurations.

If you manage to win a fight in a single turn, Bravely Second asks you if you want to take on another group of enemies. If you string together victories like this, you’ll earn a multiplier for all of your rewards (experience points, Job points, and money). Again, it makes grinding super convenient (even in areas where enemies would typically be a bit too weak and not give great rewards).

Your party in Bravely Second includes two returning heroes, Tiz and Edea, and two new stars, Yew and Magnolia. All four of them are a likable bunch that play well of each other, and they get plenty of opportunities to interact among themselves via in-game cutscenes, optional party chats, and special scenes you can view inside Yew’s magical tent (you know how chatty people get in magical tents).

Above: A nice bunch of heroes.

Yew serves as the main character. He doesn’t stray to far from JRPG tropes (he’s a youthful, idealistic fighter). But he has plenty of character traits, including a scholarly streak and an abundance of childish fears, that make him appealing. Magnolia (who is from the moon, because … you know, JRPGs) is more confident, but she’s equally as kind.

Edea is very much as she was in Bravely Default: brash, loud, and a lover of sweets. Tiz’s inclusion is a bit more interesting. He was the main character in Bravely Default, and it’s a rare and interesting thing to see the hero move to a more secondary role. He’s more mature in his new position as an experienced hero.

A lot of JRPG sequels don’t take place in the same world or feature the same characters. Just look at series like Final Fantasy and Dragon Quest. Bravely Second, meanwhile, is a straight-up sequel. It’s in the same universe and features tons of familiar faces.

This has benefits. For one thing, it starts off quickly (many JRPGs have notoriously slow beginnings). However, since you’re on the same world as the original, you inevitably revisit a lot of the same places you saw in Bravely Default. Sure, there’s a logic to it, but it does sometimes feel a bit cheap. Bravely Second has enough new locations that this isn’t a huge issue, but seeing familiar cities and dungeons does sometimes make you feel like you’re playing Bravely Default 1.5. 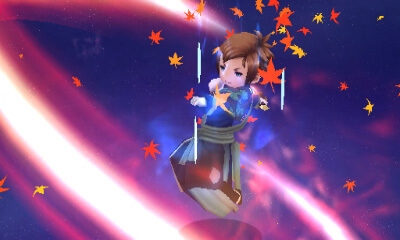 Above: Special moves can do a lot of damage (and change the battle music).

You need to beat the first game to appreciate it

A nice thing about the Final Fantasy approach to sequels is that you can jump in wherever. You don’t need to play Final Fantasy VI to appreciate Final Fantasy IX, for example. Bravely Second, however, is a direct sequel, so you’re really not going to get as much out of it unless you play Bravely Default.

Bravely Second is something of a rare JRPG sequel. It features the same battle system, world, and many familiar characters from the original. The new Jobs and even more convenient features for grinding make it a fun adventure for anyone who loved the original.

If you haven’t played Bravely Default, however, this isn’t an adventure you should jump straight into.

Bravely Second: End Layer comes out for the Nintendo 3DS on April 15. The publisher provided us with a copy for the purposes of this review.