Industry veterans Brian Reynolds and Tim Train have teamed up again at a game studio. The company, formerly known as SecretNewCo, has a new, yet recognizable, name to hardcore strategy fans: Big Huge Games. The venture’s first game is DomiNations, and it will take on mobile market leader Clash of Clans.

With financing and guidance from Asian game giant Nexon, Baltimore-based Big Huge Games is making a free-to-play combat-strategy game for mobile that covers the “sweep of human history,” said Reynolds in an interview with GamesBeat.

“It’s a mobile strategy game that lets you start in the Stone Age and head on into the bright future,” said Reynolds, who made his name creating Civilization games with his mentor, Sid Meier. “[Big Huge Games is] a new company name, too, but one that is a familiar one for us.”

While 2K Games and Take-Two Interactive own the Civilization franchise, Reynolds and Train hope to bring their own signature style to the strategy genre. DomiNations combines elements of real-time and turn-based strategy, much like how Clash of Clans does. You can build your nation in real time, moving through different historical epochs and eventually winding up in the Space Age. You can, for instance, assign hunters to go kill some deer, and then you can watch them do that.

Over time, DomiNations traverses ages of human history, like the Bronze Age, Iron Age, Classical Age, Medieval Age, Gunpowder Age, and so on. You have choices, including building certain wonders of the world. You decide which nation you play, and each has its own characteristics. The Greeks have architectural advantages, and the Chinese will have greater numbers.

“We hope to recover one of the most magical parts of these history games like when you move up and all of a sudden your archers have muskets,” Reynolds said. 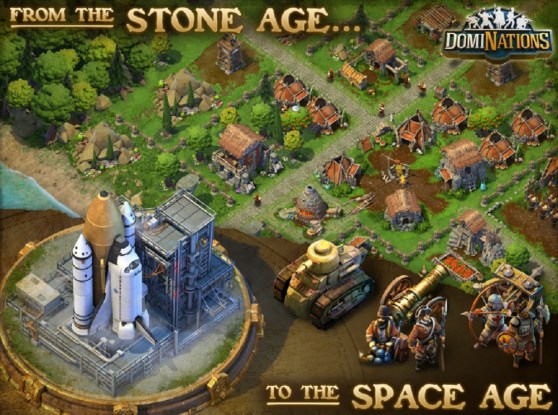 Above: DomiNations from Big Huge Games.

“It’s kind of a no-pressure, real-time game at that point,” Reynolds said.

But the multiplayer aspect is asynchronous. Someone else can attack your base, which defends itself. You can watch the replay of the event, but you cannot direct the battle yourself. With DomiNations, the twist is that your troops and society can change when you advance to a new point in history. You’ll find, for instance, that your Stone Age warriors will get wiped out if they fight someone from the Age of Muskets. You can “explore, advance, and grow [your] civilizations while conquering the world through single-player campaign and cooperative gameplay modes,” the company said in a press release.

DomiNations debuts in 2015 on iPhone, iPad, and Android mobile devices. The game might remind you of the enormously successful mobile release Clash of Clans. Developer Supercell generated $892 million in 2013 sales thanks mostly to Clash of Clans revenue. On the other hand, Clash of Clans is reminiscent of Rise of Nations, which Reynolds and Train created on the PC years ago. 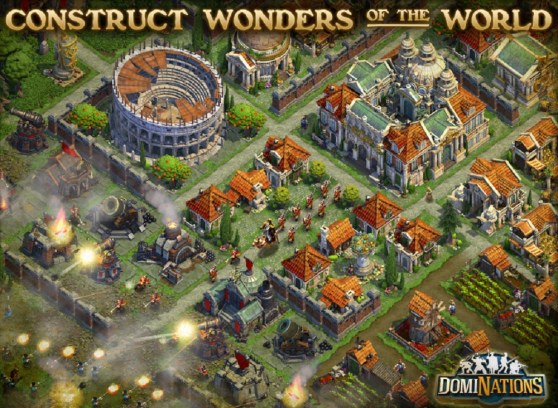 Above: Another screenshot from DomiNations.

Reynolds said DomiNations is different from Civilization, which players sit down with and play for hours at a time. Reynolds said he fully expects that people will likely play for just minutes on a mobile device. It will also be hard to repeat the PC game experience where lots of little soldiers can move around at the same time and you can interact with all of them. With earlier real-time strategy efforts on the PC, like Rise of Nations, you could make your moves in a battle at the same time that your rival did. It was completely synchronous multiplayer combat. But that’s not easily replicated on a mobile device, so Reynolds said he isn’t even going to try doing that.

Reynolds, who has been making games for 23 years, was the cofounder of Firaxis Games with Sid Meier and Jeff Briggs. There, he worked on Civilization II as lead designer and lead engineer. He also designed Sid Meier’s Alpha Centauri.

Reynolds started SecretNewCo last year after he left the chief game designer job at Zynga. He was able to team up with a lot of former coworkers since Zynga East closed down at about the same time, and Epic Games also closed its Impossible Studios. 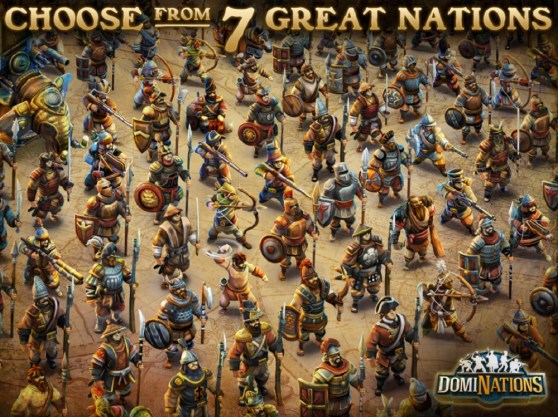 Above: More artwork from DomiNations.

It so happened that the “Big Huge Games” name became available for auction. Reynolds, Train, and others started Big Huge Games in 2000. They created the memorable real-time strategy release Rise of Nations on the PC, and they also created Rise of Legends. THQ acquired the company in 2008, but then it ran into hard times. Curt Schilling’s 38 Studios bought Big Huge Games in 2009 and assigned the team to create Kingdoms of Amalur: Reckoning. That game wasn’t a financial success despite drawing some good critical reception, and the studio closed down in 2012.

Meanwhile, Reynolds joined Zynga and created games such as FrontierVille and CityVille 2. But Zynga’s fortunes dipped after it went public in 2011 and failed to make the important transition to mobile games.

38 Studios also went bankrupt in 2012, and the state of Rhode Island, which was the company’s biggest investor, took ownership of the name Big Huge Games. After Train and Reynolds started their new endeavor, they found the name was available to bid upon. They did so and were the only bidder. They could not, however, acquire the name Rise of Nations. 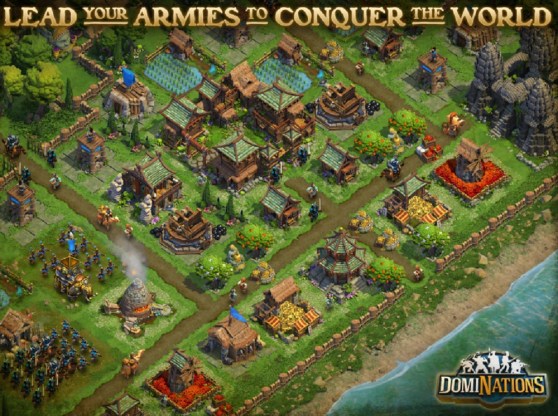 Above: Brian Reynolds is working on DomiNations.

“After Zynga, I was definitely ready to go to a small company again,” Reynolds said. “Zynga really showed me how many different kinds of people you can get to play your games if you go about it correctly.”