Disclosure: The International Mobile Gaming Awards paid my way to Marseille, France, to judge the event. My coverage remains objective.

Brianna Wu has been labeled a “social justice warrior,” or SJW, as part of the #GamerGate controversy. That’s actually one of the nicer things that’s been said about her by Internet haters.

Wu, a seasoned game developer and cofounder of Giant Spacekat, has courageously spoken out against the crowd about the tough time women have in the game industry. And that has made her a target of death threats and more. The #GamerGate controversy — a battle fueled by Internet hate that claims to challenge game journalism ethics and also led to a lot of harassment of female game developers — seems to be dying down. But Wu is still getting harassed on a daily basis, and she wants the industry to learn the right lessons from the whole affair. Will harassment and death threats against women and other “social justice warriors” in the game industry continue? Or will new efforts like Intel’s $300 million investment in diversity change both high-tech and gaming to be more hospitable places for women and minorities?

Wu is one of the game developers who has stood in opposition to #GamerGate, a hashtag on Twitter that actor Adam Baldwin (best known for the sci-fi TV series Firefly) created in reaction to a controversy that started as a spat between lovers. Depending on whom you ask, it evolved into death and rape threats made against female critics who challenge the male-dominated game industry or a grassroots movement to address bad ethics in game journalism. With all of notoriety related to #GamerGate, you might never know that Wu’s startup studio published its first game, the sci-fi Revolution 60, last year. And the Steam community recently gave her game the green light on Valve’s digital-distribution platform for PCs and Macs.

I met Wu at the International Mobile Gaming Awards judging in Marseille, France. I had a chance to see her in action on the judging committee, where she raised the issue of diversity in gaming. We did an interview and talked about how she got into games, how her team created Revolution 60, and her scars from battling #GamerGate trolls on Twitter. Wu disclosed that she has received dozens of death threats over a five-month period. Those threats forced her out of her home. But she’s still making games and is working on her next title.

As she does so, she also has to spend about a full day each week dealing with law enforcement as part of the lingering effects of #GamerGate. That’s the cost of speaking out. Here’s an edited transcript of our conversation. 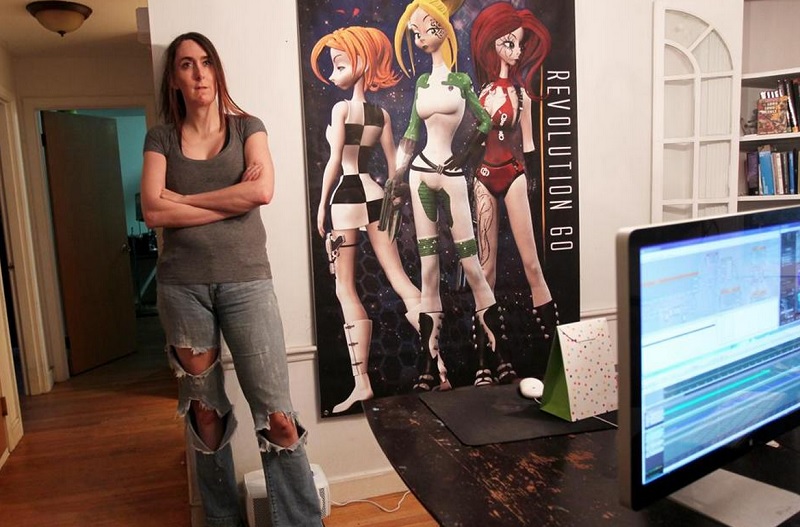 GamesBeat: Tell me about your history in games.

Brianna Wu: The first game I remember being ridiculously passionate about was Super Mario Bros. 2. It was the first game where you could play as Princess Peach. It wasn’t just a game where the boys had their adventure. Peach was in the game and she was so powerful there.

You have to understand, I grew up in Mississippi. I didn’t fit in with anyone there. So I gravitated toward computers and video games. It was a world I could be interested in that wasn’t just about religion or football.

GamesBeat: This was before you thought of becoming a developer, then?

Wu: Here’s the thing about my parents. My dad is in Mississippi. He exited the Navy and made a ton of money as an entrepreneur. Entrepreneurship is in my nature. My mom bought a computer in the ’80s to do accounting, and she was so smart at computers that we spent all our time with them. My childhood was sitting on the floor of her office and figuring out how to program with my mom. Instantly, I took a very deep affinity with computers and development and programming and all of that.

GamesBeat: How did you break into games?

Wu: This isn’t my first startup. It’s actually my third. I started my first when I was 19 years old. It was a quarter-million-dollar animation company, which was a lot of money for a 19 year old to have. My parents trained me to be an entrepreneur. That’s kind of my background — “You can go do anything you want.”

Unreal Engine 4 for iOS came out. I saw it, and I predicted that games weren’t going to internally be this 2D core animation thing. They were going to go to the next level. I saw that engine and got so excited. I put together about $150,000 in investment and we went from there.

GamesBeat: Tell me about your current company.

Wu: Giant Spacekat started off — again, we had no idea what we were doing — up in Boston. But I knew that to get my foot in the door of the games industry, I needed to do two things. I needed to find a unique angle for us, because there are lots of indie game developers. For a long time I’ve felt like there were not video games for women. Very generally speaking, the games industry creates games by men and for men. I felt like there was this space out there for a different view. I saw a new market emerging.

Very baked into Giant Spacekat’s DNA, we have men working on the team, but we’re always looking for talented women. Our lead engineer is a woman. Our lead playtester is a woman. That’s been the angle. We’re making games that anyone can play but that are friendly to this audience. We got started in 2011. 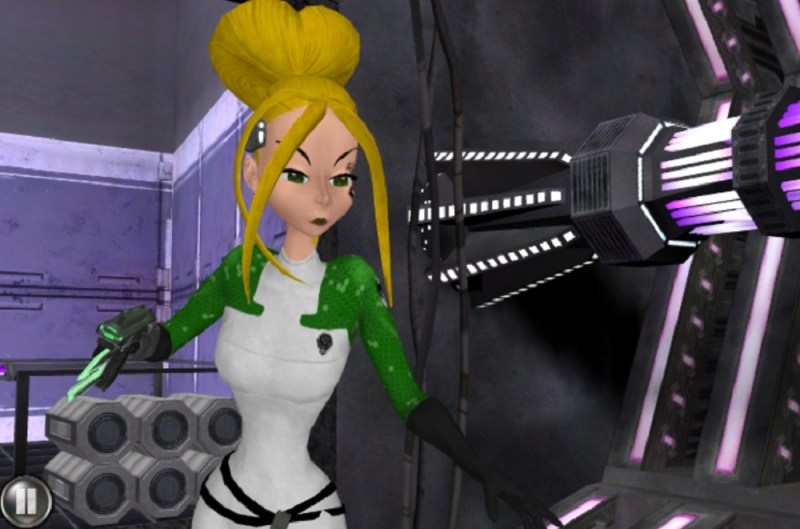 Wu: We finished Revolution 60 last year, yes. It was very successful. We wanted to ship a game that would be big enough to say, “Look at Giant Spacekat. We may not have previous industry experience, but we’ve shipped a successful, well-reviewed game. Now let’s take it from there and grow the play.”

GamesBeat: Along the way you got very outspoken about women in the games industry. Where did that evolve from?

Wu: I didn’t feel this strongly before I started in the game industry. It was being treated like shit on a regular basis that made me so outspoken. It’s really funny. My husband’s best friend, the best man at my wedding, I remember talking to him in 2009. He was talking about how he loved to read Jezebel [a site aimed at women readers]. I said, “I don’t like them. I think you need to concentrate on doing good work and you’ll be fine.” That’s what I used to believe before I started this job. I don’t feel that way anymore.

GamesBeat: The #Gamergate issue drew you in. How did you become part of that whole show?

Wu: #Gamergate started with attacking Zoe Quinn, who’s a friend of mine in Boston. A few months before they had attacked and run my friend, Samantha Allen, out of the industry. It didn’t have the GamerGate name yet at that point, but they’d been bullying my friends for a long time.

So after speaking out against them, GamerGate eventually went after me big time. I told them, “I’m not going anywhere. I’m not getting bullied out of this industry.” That made them even angrier, to the point where it’s been nonstop harassment for five months now.

GamesBeat: What kind of volume are you talking about? On a daily basis, what happens?

Wu: Hundreds of angry messages. Death threats still constantly roll in. I spend at least a day a week working with law enforcement at this point. If you look at the Newsweek story two months ago, talking about the volume of harassment women were getting, I was at the top of the list. It’s constant. 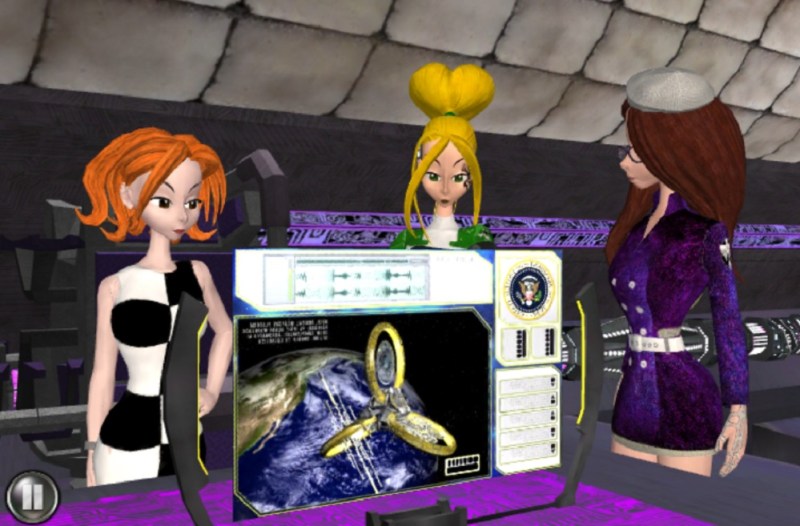 GamesBeat: Somewhere along the way, the narrative the GamerGate people started telling went, “Hey, we’re being misportrayed by the media. It’s a larger conspiracy. They say we’re all about death threats when we’re really about better game journalism.” I take it this is not an argument you support.

Wu: I’m an engineer. I look at outcomes. Who is GamerGate choosing to target? Me. I’m not a journalist. Randi Harper isn’t a journalist. Anita Sarkeesian is an independently funded journalist. You can watch her or not. She’s not a game reviewer. It seems to me that everyone they target speaks out concerning equality for women. That reveals a lot about their motives.

GamesBeat: I wonder how it got so big. It almost seemed like a lot of people felt as if it would just blow over, that it wouldn’t last. Somehow it kept on going.

Wu: This is what people don’t understand in the industry. The people saying that, the people who believed it would blow over, were generally men in the game industry. I’ve been getting rape threats since I started my job. Ask any woman who works here what amount of harassment she gets on a daily basis. This isn’t going anywhere. Assuming it will go away is just wishful thinking.

GamesBeat: A lot of companies chose to stay silent as well. They also probably felt that if they stayed silent, they wouldn’t become targets.

Wu: Absolutely. Behind the scenes, that’s what has happened at company after company. I can promise you that’s true.

GamesBeat: Intel gave it a second life, kind of stepping in their own crap.

GamesBeat: It seemed to raise it to a higher level of awareness. I felt like at some point after that, with it getting ridiculed on TV by Stephen Colbert and so on, it turned a corner. The GamerGate people seemed to lose what sympathy they had up to then.

Wu: Colbert was a turning point, definitely, when he had Anita Sarkeesian on.