I have a confession to make: I’ve never played any of Tim Schafer’s old point-and-click adventure games. So when people mention PC classics like Grim Fandango or Full Throttle, I just quietly nod and pretend to know what they’re talking about.

But now that I’ve played Broken Age (or at least the first half of it), I think I’m beginning to understand what they mean.

Nearly two years after Schafer and his studio, Double Fine Productions, smashed crowdfunding records by raising $3.3 million for a new adventure game, Broken Age: Act 1 is ready for its public debut. Out on Jan. 28 for PC (reviewed), Mac, and Linux, it follows two teenagers who try to rebel against their fates: Shay wants to break free of the autonomous spaceship that’s been raising him his whole life, while Vella’s family is forcing her to sacrifice herself to a mysterious behemoth known as Mog Chothra.

It’s a funny tale that’s filled with strange characters and presented in a hand-painted art style that pops off the screen with its vibrant colors and intricate details. The only real flaw is that the adventure is over way too soon. (Read our review of Act 2 here.) 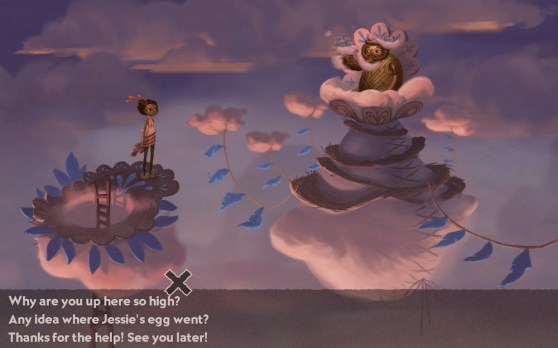 Above: Among Broken Age’s star-studded cast is comedic actor and songwriter Jack Black, who plays the delightfully pompous Harm’ny Lightbeard.

Playing Broken Age feels like stepping into an interactive painting — sometimes, you can even see the brush strokes within the 2D backgrounds. You can take control of either Shay or Vella at any time, and the worlds they inhabit couldn’t be more different from each other. Shay’s ship is full of small details that reveal more about the boy’s plight. The hexagonal pattern that adorns the walls makes the ship look like a giant padded cell. The various toys strewn around its halls show just how long he’s been there. And in a vain attempt to appear warm and cuddly, his artificial caretaker dresses its gangly metal arms with ugly sweaters.

In contrast, Vella explores idyllic landscapes that feature a fairy tale flair with some kooky twists. For instance, her hometown of Sugarbunting is known for the superb quality of its baked goods. So, in keeping with that theme, Vella and the three other girls offering themselves to Mog Chothra come dressed as elegant cakes and drinks to entice the monster. Other visual gags abound in Broken Age, and part of the fun is seeing what else the developers came up with.

What do a vomiting tree, creatures made of yarn, and a creepy lumberjack have in common? They’re all pretty damn memorable. Broken Age’s supporting cast has a ton of weird and quirky personalities. They make Vella (voiced by actress Masasa Moyo) and Shay (actor Elijah Wood) look like the only sane people in their respective worlds. Heck, some of the best one-liners comes from Shay’s talking knife. I repeat: a talking knife. Not many developers could pull that off.

Beyond the realm of futuristic silverware, the dialogue is consistently funny and charming. And beneath that colored candy coating is an emotional center that reminds you of the very real stakes involved in Shay’s and Vella’s journey. 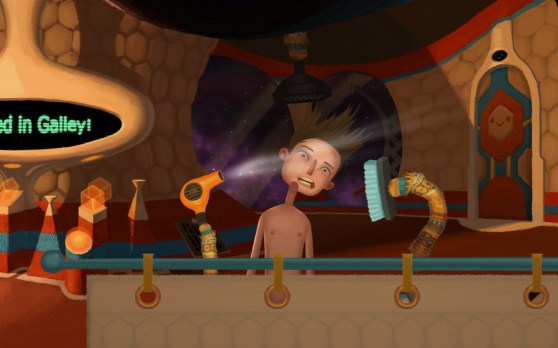 Above: Shay is always under the watchful eyes (and hands) of the spaceship’s computer.

Adventure games are known for their puzzles, which usually consist of collecting items and using them to move the story forward. While Broken Age continues this tradition, the problem-solving process feels natural. Solutions are more obvious than you might think, and even the more outlandish results follow a logical train of thought. It’s also easy to experiment: Just drag-and-drop items from your inventory if you think they’re the key to solving something. Combining items is also straightforward; Shay and Vella will let you know if those pieces belong together or not.

I only got stuck once, and the answer was so simple that I was kind of mad at myself for not figuring it out sooner. But if you explore enough and listen to the dialogue cues, you shouldn’t have much trouble getting through Act 1. It definitely leans on the easier side, though, so don’t go in expecting a challenge.

When you’re not exploring or solving puzzles, Broken Age throws you into a few action sequences that, at best, feel like cheap distractions. One task has you rescuing alien critters in space by using large mechanical arms to scoop them up. It’s like a 2D version of the claw machines you’d find in arcades. They’re not hard at all: Sometimes the aliens slide from left to right, but you’re never punished for missing or taking too much time. It actually becomes kind of irritating since you have to do it more than once.

Even more useless is the boss fight you encounter at the end of Act 1. The animations are just as stiff as they are in the rescue minigame, and if you don’t know what you’re doing — it took me a while to figure it out — you’ll go through an endless loop of annoying dialogue and cutscenes.

Last summer, Double Fine announced a relatively last-minute compromise to split Broken Age into two parts so it would come out in 2014 and not, like Schafer and his team originally estimated, in 2015. This might have something to do with how rushed the midgame ending feels.

Just when you start digging deeper into the story, Act 1 grinds to a screeching halt. Broken Age fades to black, and the credits roll. Dramatic cliffhangers are nothing new in games, but this felt like the developers shoved that moment in there for the sake of having some sort of teaser for Act 2.

I understand why they did it, but Broken Age ultimately suffers because of that decision. It would’ve been better as a single, cohesive experience instead of two parts torn apart at the seams.

You’ll find a lot to like in Broken Age. It has a beautiful world populated by a colorful cast of characters and an alluring mystery that doesn’t unfold in the way you expect it to. This is Double Fine Productions at its finest, and it’s on track to finish strong with Act 2.

I just wish it kept both pieces together.

Broken Age: Act 1 releases Jan. 28 for PC, Mac, and Linux. Later this year, it’ll also come to iOS devices, Android, and the Ouya microconsole. The developer provided GamesBeat with a download code for the purpose of this review.