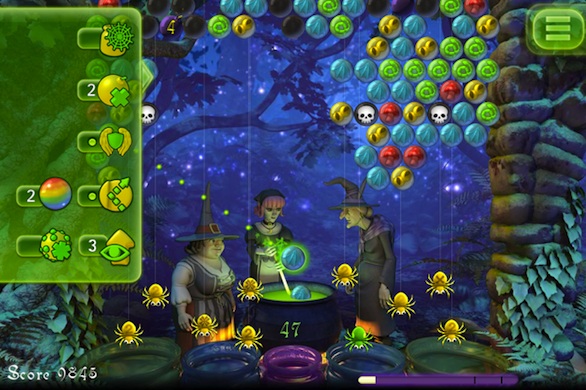 Casual games developer King.com announced that its free-to-play title, Bubble Witch Saga, is now available on the iTunes App Store. The bubble-popping puzzler is the first mobile game to offer full synchronization, including game progress and any purchased virtual goods, with its counterpart on Facebook, which currently has 4.6 million active players.

“As consumers and the industry focus more on games for mobile devices, launching a truly cross-platform Facebook game has been a top priority for King.com,” said Riccardo Zacconi, the chief executive of King.com, in the press release. “We’re excited to be the pioneers in making this available for our players. Gamers can play signed in or not and progress either way, enabling them to experience the excitement of Bubble Witch Saga whenever and wherever they wish, without losing their place in the game.”

In Bubble Witch Saga, you progress through levels by matching three or more of the same-colored bubbles, which then fall into cauldrons that net you bonus points. The game already contains more than 150 levels, with more being added every week.

“This type of fully synchronized functionality is going to be expected by gamers moving forward,” said Tommy Palm, the “mobile guru” at King.com, to GamesBeat when asked if this feature will be implemented in future releases. “Players do not want to have to start all over again…just because they switch devices. Therefore, we feel it’s critical to focus on cross-platform experiences for our casual social titles to come. Also, much of the functionality built for [Bubble Witch Saga] is reusable for coming games, which means we will be able to more easily ensure the quality of future mobile games much faster.”

Another casual games developer, Big Fish Games, is also focused on maintaining this type of progress across different devices (albeit not on Facebook). It released Big Fish Unlimited on Tuesday, a cloud-based streaming service that allows players to access a variety of casual titles from any device as long as a constant Internet connection is available. King.com, however, believes that native applications, at least for now, are still the way to go.

“Our current mobile strategy is to offer a high quality native-game experience for tablet and smart phones,” said Palm. “We feel that the game experience that consumers are looking for is best catered by fast [and] responsive native apps. In the future, mobile networks may be good enough to make great game experiences using streaming technology, but today they are just not there yet.”

Founded in 2003, the London-based King.com is the fourth-largest publisher on Facebook, with 2.5 billion matches played each month on the social-networking site alone. In addition to other popular titles from its Saga series, the Android version of Bubble Witch Saga will launch later this year.