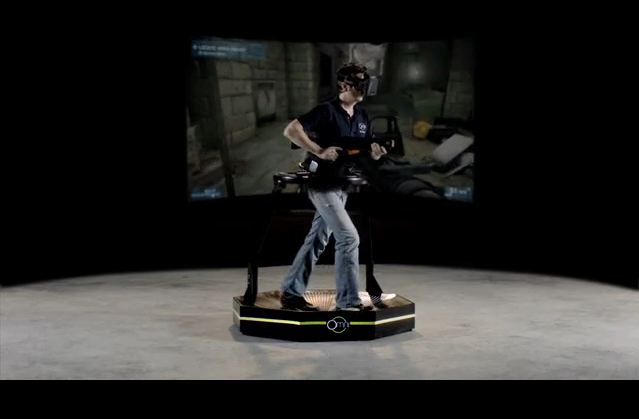 The Holy Grail of immersive gaming is Star Trek: The Next Generation‘s holodeck — a room that you can enter that becomes an interactive experience and overwhelms your every sense. It’s a concept so far-fetched that it still feels like we’re a hundred years away from it, and we probably are — but the equipment exists today for you to build a holodeck prototype.

For something to qualify as a holodeck, it must trick your every sense. That’s not really possible today — we’re still working out smell-o-vision — but a few companies have figured out how to immerse you in the sight, sound, and touch of a gaming world.

Here’s what you’ll need to build your own holodeck-like experience:

It starts with Oculus Rift. This is the amazing 3D visor that is making everything else possible.

The Rift is a headset that completely submerges your vision in a game. It has stereoscopic 3D and motion sensors that enable players to look around a world naturally. Developers already have their hands on this device, and they’ve started supporting it in their games.

Anyone can order the Oculus Rift development kit from the company’s website for $300. The unit ships this month.

As neat as the Oculus Rift is, it’s got to feel weird to walk around a world using a controller. That’s where Virtuix comes in with its Omni treadmill.

Virtuix’s omni-directional walking surface enables players to control their in-game movement by walking or running in place. Unlike a standard treadmill you’d find at the gym, this one provides for movement in any direction.

If the Rift enables players to look around a world naturally, then this might do the same for movement. When the two are combined, if it works as advertised, this is potentially a big leap forward for affordable virtual reality.

Virtuix has a crowdfunding campaign for the Omni going on right now. It already surpassed its $150,000 goal. Players can get the fully assembled treadmill by pledging $400 to the Kickstarter. The company expects to begin shipping the final product in January.

Virtual reality is all about making everything as real as possible. That’s also the goal of the ARAIG, which stands for “as real as it gets.” This is a wearable vest that uses several different sensors and pressure plates to create feedback of in-game actions.

Where Rift and Omni cover vision and motion, ARAIG covers touch. When players get shot in a game, this suit will thump players with feedback that approximates that damage. It also has a pair of speakers in its shoulders that will accentuate the sounds of bullets flying.

ARAIG is also currently running a Kickstarter to fund production. The company is looking for $900,000. With 25 days left, it has only raised around $60,000 from 243 backers. If it does reach its goal, ARAIG will ship out to consumers in December 2014.

Finally, we have the Delta Six gun controller. Star Trek‘s holodeck is very versatile. It could easily put characters into combat scenarios or into cerebral conversations with life-like people. It’s pretty clear that our holodeck that we are piecing together here will probably work best with first-person shooter games at first.

To that end, it’s good news that both the Oculus Rift and Omni support controller designer David Kotkin’s Delta Six. This is a realistic-looking firearm controller that players can use with shooting games. It has motion detection, so all you have to do is point and pull the trigger.

“Working with a company developing a product as incredible as The Omni is a no-brainer,” said Kotkinin a statement. “We realize that the fully immersive gaming experience has to be just that. Fully immersive. Your arms and legs, your senses, the controller you’re wielding, it all needs to work together.”

Kotkin’s Delta Six is also on Kickstarter. It has a few days left, but it’s already past its $100,000 goal. We spoke with the designer a few days ago about what it’s like to build a realistic gaming gun.